For Sale: 2004 ( REGISTERED 10/2004) Rover 75 Connoisseur SE CDti , 1950cc, 117,939 miles, Diesel, Automatic. Silver, saloon, RHD, Informed DVLA that it has been “exported” Insurance expired. MOT EXPIRES 14.09.21 FSH. (serviced every year) 3 owners. 750 Euros ONO.
I live in Hérault 34.
This car has a BMW gearbox and BMW engine. drives beautifully. Just driven 1000 miles of trouble-free motoring. I have owned it for over two years, owning a '99 model before that for 18 years. Great cars. I would be interested in selling either to someone with enough money for registering in France, who wants a quality vehicle to drive or to another Rover enthusiast as spare parts.

I would also be interested in knowing how much it would cost to get French plates and go through the procedure of getting it registered. 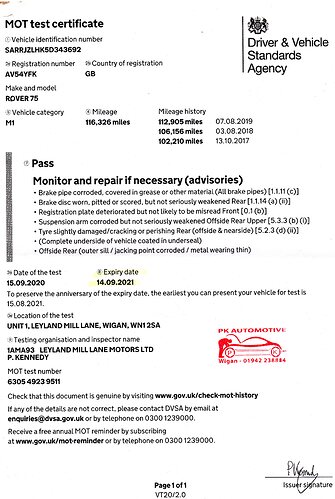 Contact SF’s vehicle registration expert - and professional - Mark Rimmer. Open any vehicle admin thread and you will soon find him. A PM to him and you’re off, tho’ I think he’s extemely busy a.t.mo.

He’s doing my re-reg as we speak. I didn’t declare my RHD GB car to DVLA as exported until I got the green light to do so from Mark. I wanted my V5 to be all of a piece, as original, in case a declaration to DVLA before the re-reg process began created any issues. I don’t think it would have but this business can be so arcane that I didn’t want to take any chances.

I had two goes at buying just such a Rover. Great cars. Fortunately both failed. I say ‘fortunately’ because both were on FR plates but were in UK. The sellers had no idea whether it would have been possible to register these cars in my name.

One of the things it’s not adapté for is proof of address. I sent Mark my tenancy contract, a pukka 12 month job. Not acceptable! Despite the fact that I opened my bank account on the strength of it and it is one of the two ‘gold nuggets’ for proof of presence in FR, along with a title deed, ANTS won’t accept it.

a title deed. Fair enough, if you own a property.
a certificate of taxation or non-taxation for the previous year (except for the request for a tax release). What if you have only recently arrived in FR?
a bill or attestation for rent, gas, electricity, water or telephone less than six months old. What if all those things are included in the rental, as with mine?
a certificate of housing insurance. See above.
a certificate establishing their link with the host organisation appearing on a list drawn up by the Prefect and, in Paris, by the Prefect of Police for persons unable to provide proof of their address or to whom the law has not established a commune of attachment. Host organisation? I don’t have one.

But amazingly, despite it’s ineligability in every other case known to me, in every country, a mobile phone contract will do! I do have FR one of those.

What is the millage and what price you are looking for might help in a sale, that and some pictures.
It would be interesting to see what kind of cost registration across here would be.

Many thanks for your detailed reply.

Does anyone have any advice/experience with using Leboncoin? I have read about the paypal scammers on this website but nothing since 2017? Would you accept cash for payment or only use the Leboncoin system which appears safe?

Very impressed with Leboncoin! Sold it already with quite a bit of interest. They have a very secure method of payment but I did not need to use it as the first person to view lived close by and I was able to go to his house, he gave me copies of his passport and a cheque with his address on plus 200 euros cash from an ATM.

Did you give him a bill of sale & the complete V5c (less the export notification)?
Is the buyer French or English?
I’m not sure how the new owner will be able to convince Douanes that he was the importer & that might be a concern.

Well done Peter H. You have his money - by fast tracked chq clearance I hope! - and he has the car. A very nice car.

From the comment raised by Mark Rimmer and my researches elsewhere, it may not be plain sailing for your buyer but that was none of your concern.

He seemed to have done his homework on buying an import. I gave him V5, FSH, photocopy of ferry ticket with car reg. and all paperwork on the car. We both signed an official French bill of sale for a motor vehicle copied off the internet - Certificate of Transfer of a used vehicle (Certificat de Cession d’une véhicule d’occasion Articles R322-4 st R322-9 du code de la route Exemplaire) - Highway Code. He is a very honest, decent French man.