Former French president Nicolas Sarkozy has been detained for questioning in connection with a probe into influence-peddling, a judicial source says.

Yes, just jolly dee old boy! Strange how it all comes out in the wash though. The choice between Cameron's squeezing the poor and Hollande's squeezing is tough one. The easy bit is the food is better here.

Sarko should be on bread and water soon, but not to worry, after all it is baguettes and Evian. rather than Sunblest and Asda's own.

How lucky you all are that his regime has been replaced by M. Hollande's socialist paradise!

Hope George W. gets an invitation as well...

What a good idea. 'Tis an outcome most devoutly to be wished.

It's the only line he has, so I suppose he'll have to make do with it.

He is claiming the judges are all biassed against him. If the evidence is heaping up against him then he will need a better line than that.

The way things are going, Tony might have to answer awkward questions in the Hague...

There are at least 7 known affairs which are now tightening around Sarkozy and forming a nasty, sticky web. To answer the question Brian raised about grassing, it is believed that Copé, who sent in last week all the internal book keeping for the presidential campaign, was the last straw.

It is getting juicy. The scandal is worthy of all of those magazines one finds in disarrayed heaps in doctors' waiting rooms. With a picture of anxious looking Carla to headline it of course, but here is the cover shot. 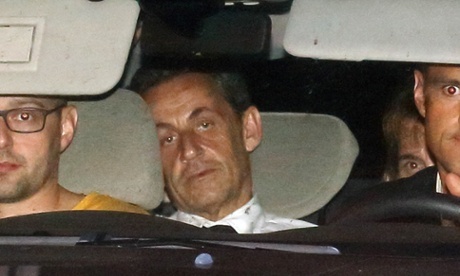 Pity the UK law authorities can't pick Tony up and place him in garde à vue.

Very brightly it seems. Sounds like somebody has grassed him up!

I have to say I wrote " the allergation that is"

I remember this coming up a few years ago ...the fact that

there had been dirty dancing..but nothing more was said.

So now the spotlight shines again.

Pardon! The police interviewed him last Tuesday, yes, but it seems also that he was detained yesterday evening, so how is it old news?

The allegations that is...

Delicious little story, apparently his lawyer and two magistrates have been taken in over alleged corruption as well. Apart from Carla who clearly approved, he has possibly been putting his hand in places where they should not be. Ahhhhh!