I’m trying to use FranceConnect to connect to Sidep to download a recent Covid test result for travel but I’ve realised I have no possible way of connecting to it. As far as I can tell you can only do so through the following:

Anybody got an ideas what the hell I’m supposed to do?!

If you’re in the French health system, you can use Ameli

Do you have the app tous Covid ? I’ve got my vaccination results on this app so you may be able to get a test result as well.

Also when I did test I was given a small piece of papier with instructions for accessing results. Do you have something similar?

If all else fails get on the phone and battle through to your local test centre. It takes time but once you get through to a real person they can be really helpful. If your french is not good could you find someone to help?

I would second Caroline’s suggestion @tc123 to go to a vaccination centre (or perhaps even try your pharmacie first in case they can access things you can’t). My partner can’t get certificates or anything via Ameli so has to use that sort of route! Last week he wanted a copy of his vaccination certificate and went to his GP who could get it for him.

Thannks all for your suggestions.

Unfortunately I can’t access Ameli because, belonging to a different caisse, I don’t have an account there any more. As for TousAntiCovid it seems that’s only good for ‘storing’ your certificate - ie scanning the barcode on the test result. Can’t actually access any new test results on there.

The other thing I tried was to click on the link in rhe Si-Dep text message I received after the test. I remember doing this when I had a pharmacy test before and being able to access the result, but this time it takes me to a ‘Hôpitaux de Paris’ page (I don’t live in Paris) and it asks me for a login I don’t have. Hôpitaux de Paris seem to deal with the tests for personnels soignants, which I’m not, so it’s strange that this should some up. I’m wondering if the pharmacy accidentally registered me as one.

As for FranceConnect though, I seem to be very unique in that there’s simply no way I can access it. The frustrating thing is I should be able to access it via Impots, but it gives me a sort of vague computer-says-no response every time.

I will go back to the pharmacy as suggested and do a bit of begging. Worst comes to worst I’ll just have to use the bit of paper they give you at the end, not an official test result but at least it says negative and has a stamp on. Not certain this’ll be sufficient tho

via Impots, but it gives me a sort of vague computer-says-no response every time.

what is the message exactly? can you take a screenshot which will help enormously in understanding the issue? What are you inputting to log in the FranceConnect site?
Sorry to appear blunt but without more detail, its next to impossible to advise helpfully. 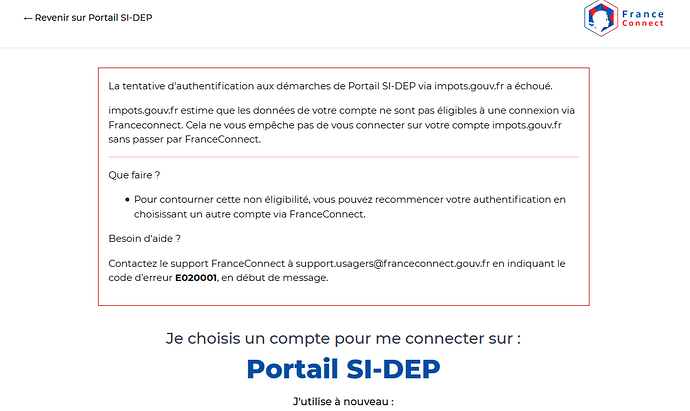 This is the message I get. It’s inviting me to authenticate using another account on FranceConnect but as explained in my first post I can’t…

Going to try sending an email to that address

No it’s saying that you should go through your impots account directly rather than through France Connect, that is my understanding anyway.

I can log into my Impôts account with no problem. The problem is that it won’t let me use my impôts account to authenticate France Connect to access SI-DEP and get my QR code/test result.

As others have said, the only route is the paper one - pharmacie, GP or vaccination centre. My partner has the same problem as you in that Ameli does not cover his caisse.

Going to try sending an email to that address

seems sensible - don’t gorget to put “code d’erreur E020001” in the beginning of the message as indicated.

Did you previously have a FranceConnect account and is it perhaps asking you to create a new one?

Thanks again all. I’ve just been back to the pharmacy and fortunately they were able to print off the QR code/test document for me. Panic over!

On France Connect it’s not a case of having an account as such, you log in through one of five options (the bullet points in my first post). A bit like when you use a Facebook or Google account to login to this forum, except that on FC you have to log in via one of those other accounts. I feel like I might have used FC once in the past (for ANTS or something like that) but it must have been while I was still in CPAM, so I could log on through Ameli.

If it’s any consolation Orange failed to work also for me to use France Connect and I also don’t yet have any of the other ones. They used to say Sosh and Orange worked - Sosh is the LCC of Orange - but have noted recently, since I raised the failure with them in fact, they have removed Sosh from their statement of what works. Funny, that.

I am in the same boat as you. I cannot login to that site when I attempted to register my car since I did not fit into any of the 5 categories. I contacted the tax office for a tax number but they refused to issue me a tax number. They said they will eventually get around to issuing me a tax number, but you cannot rush them.

you can register your car through a third party…

Here’s the response from France Connect, which is totally unhelpful, it seems to think I was using some sort of temporary numéro fiscal (I definitely wasn’t, I copied it straight of my last Avis just to be sure) and that I need a secu number (which I have had for years).

Did you see this reference in English about FranceConnect?