Fruit Harvesting for the Reluctant Gardener

So much fruit and what to do about it.... 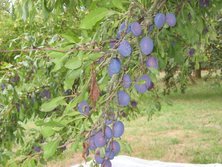 being fed up with so much windfall plums and other fruit just going to waste, I decided try and make harvesting easier (and more fruitful) albeit that I didn't have access to a tractor with its fruit-harvesting gizmo.

At the outset, I should say that if you are at all spheksophobic (i.e. have a fear of wasps) this project is probably not for you, but then again, if you happen to be spheksophobic, harvesting fruit probably won't be your favourite

Wasps there will be aplenty with this process and whether clearing away rubbish or, ultimately, harvesting the fruit, wearing gloves, a long sleeved top and foregoing the wearing of shorts are all highly recommended.

I started off by raking off from under the trees as much of the already fallen fruit as I could. Most of it was in the course of rotting anyway but removing it served two purposes. Firstly, it helped reduce the number of wasps and hornets attracted to the working area and secondly, by piling the rotting debris elsewhere, the wasps would be more likely to go where there were juicy easy pickings.

As luck would have it, digger wasps had taken up residence a short distance away from where I was working so I took care not to disturb their wasp bing. They didn't seem too concerned abut what was going on around them. 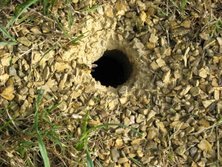 Having cleared the area, I laid out around the tree large sheets of clear polythene. Using clear sheets will help reduce damage to the grass underneath. Don't be tempted to use the likes of dark coloured weed inhibitor unless you're happy to live with peely-wally looking grass after its lifted. The sheets were pegged out with

U-shaped pegs that you can generally find in any brico, the type used to train shoots from the likes of pumpkins. 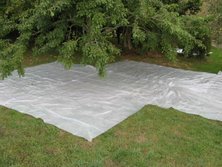 The next stage was simply to shake the tree. The polythene helped cushion the falling fruit, reducing damage. Collection was then a matter of removing any rotten or damaged plums and piling them up for the wasps and picking out the best of the crop for cooking and/or freezing.

Easy pickings in just a couple of shakes 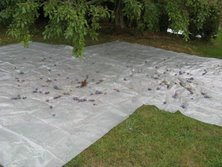 The whole process was quite a contrast to picking your way through rottingfallen fruit watching out for wasps. Harvesting was much quicker, the yield was far higher and the eventual crop was probably of much better quality.

Here's a sample of the end result. 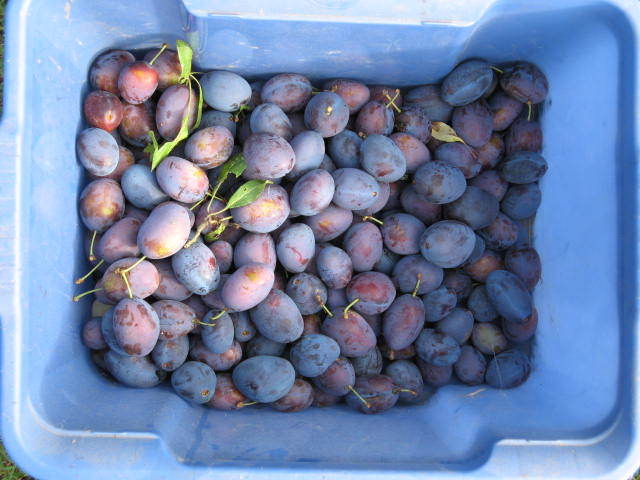 Thanks for the loppers hint - I’m having blackberries and figs and ice cream for tea. Only trouble I lopped a rather large branch which fell on me-still, no pain, no gain.

Blackberries - I have a new tactic - selective cutting … This does mean you have to go picking armed with shears and loppers but it makes a huge difference - have harvested loads with minimal prickling!!

Good idea. Our plums lasted such a short time that the wasps didn’t get at them-there doesn’t seem to be many about at the moment especially the big ones. We are being submersed in wild brambles and have a fantastic crop of blackberries but why are the biggest, the ones you can’t quite reach? Also looks like a bumper year for walnuts with our own heavily laden and the big one just down the lane the same. Cob nuts looking good too. In the veg plot aubergines have set lots of flowers but only a few fruits. Bumper year for pots and beans but low on peas. Still every year is different but I am surprised at the hosepipe ban as we had a lot of rain in the autumn, winter and spring. We are at 250m 20kms north of Pau on a plateau surrounded by the maize which is going off quite quickly so hoping there will be an early harvest so we get our views of the Pyrenees back - last year it was just before Christma when it went.