Particularly when the disruption takes the form of a visit from friends. Visits to this outpost of civilisation are rare enough to be a treat and this one even prompted my wife to take a couple of days off, which in itself is extra-ordinary. Paul and Lucy came all the way from Sheffield by train, bringing Indian spices and creamed coconut for the beleaguered of Martel.

They arrived in Sheffield from Suffolk a year after we’d moved oop north to the Steel City. We didn’t, alas, get to know them until we’d left for balmier climes. They started off as friends-of-friends, but are now firm first-hand friends. Paul has Parkinson’s, but copes admirably – thanks in no small degree to the joys of ping-pong. So, even though the weather was borderline pants, the first thing Paul and I did the morning after their arrival was to remove our blue remembered table from its winter wraps.

Last time they were here, they came with two other friends who were going through a marital break-up. Since they’d only been married just over a year, the atmosphere was a little tense. And since it was February and cold, we brought the table inside and transformed our living space into a hotbed of pinging and ponging. It helped keep Paul on the straight and narrow.

This time, both of them were hoping for a kind of sanatorium-style respite from the exigencies of the Great Recession prior to taking the train back to Paris and thence to Burgundy to join some other friends, who have a barge near Dijon. Paul has just been made redundant after 13 years of loyal service to a charitable organisation. It has not treated him charitably and they have been several times through the Mangle of Life since notice was given. So, much table tennis was the order of the week.

It – and their company – helped take my mind off Daisy. We last saw her on Easter Monday. She was perched like a Cheshire cat on the big central beam that runs the length of the roof, nestling right up underneath the ceiling. I figured that she was perturbed by Sarah the Dutch dog, who had parked herself on the terrace just the other side of the cat-flap. She was waiting and hoping that Alf would come out and play, but the rain rained all day long and Alf is old and likes the comfort of his basket. Or was it the advent of spring that perturbed her? Every year about this time, Daisy tends to pack up her kit bag and go wandering.![](upload://7wpvTJFobDH38ya0vZOCInd2JTR.jpg)

There was still no sign of her when Paul and I were unwrapping the ping-pong table on Wednesday morning for the first of our Titanic struggles. I look back on my life and it sometimes appears that I have spent an inordinate amount of time calling for cats. What’s that strange noise? Oh, that’s the cat-caller, shaking his tub of croquettes. I’ve learnt not to get frantic over Daisy. Several times I’ve managed to flush her out of her customary chill-out zone: an area of untamed undergrowth not far from the communal bins, the equivalent perhaps of the hobbits’ wild wood, where she must go to live off nuts and berries and contemplate the vicissitudes of life.

Paul and I are evenly matched and, while we strive to excel, the competition is more important than the winning (as the cliché goes). I have a fierce forehand, which used to strike terror in the hearts of the opposition in the far-off days when I represented Brighton Benefit Office’s B team – until, that is, opponents spotted my Achilles Heel: a useless backhand. I don’t play much these days, whereas Paul plays just about every day to keep his affliction at bay. That’s my story and I’m sticking to it. The score was two matches apiece going into Friday, the last day of their visit. It went to the wire. I succumbed – valiantly, closely, courageously – by three sets to two and so three matches to two.

I wouldn’t want you to think that I spent all my week playing table tennis. In between checking e-mails and calling Daisy at the edge of the wild wood, I played my part in the uncommonly sociable goings-on at La Poujade Basse. We walked and talked, and talked and talked and talked – about our friends and our children. In between times, there were meals to prepare and to consume. It’s incredible how much longer it takes to consume a meal when friends are involved. Incredible, too, just how difficult it is to ‘get on’ when there are guests in the house. But, so long as there’s no paid work to be completed, I wouldn’t have it any other way.

As he unwound, Paul felt sufficiently relaxed to read us a few of the poems he composes on his iPhone. He read one on the final evening about his wife, which made my wife (the mushy dame) burst into tears. I suggested that he reinvent himself, with all this time now on his hands, as the iPhone Poet. I can see it now… Ladies and gentlemen, live and on stage, will you put your hands together and welcome… the iPhone Poet!

Three days is the perfect length of visit. Three days devoted to the life-enhancing society of friends does not irreparably disrupt your daily business. Any more and it takes half an age to catch up. Debs went back to work on Saturday morning and took our friends to the station. While she was busy earning the money to keep her husband in the style to which he is now accustomed, I got back to the business of calling Daisy. Hark! The cat-caller.

During my afternoon walk with the dog, just before Final Score, I bumped into the garrulous family Garou – or the Garoux, as they are known here generically. The younger daughter is a supply teacher who has that unerring ability to talk without drawing breath. Her quieter sister told me that Serge, who cuts his wood near their happy homestead, had found a cat recently and taken it back home. She thought it was a tabby. When I finally managed to extricate myself from their company, I phoned Serge just before the football results. Arsenal were playing at West Bromwich, but Daisy took preference. Alas, no. (I am known by the farming community, for some strange reason, as Marco…). Non, Marco. C’était un petit noir et blanc. Not a tabby with a tail like a corkscrew. 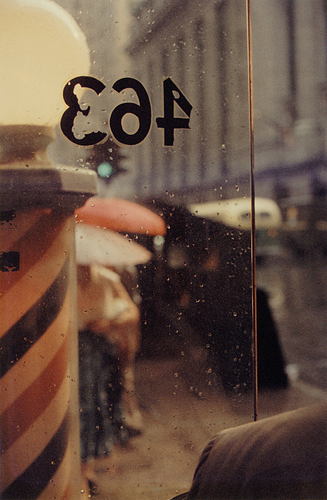 Soon after my wife abandoned me for Peter Brook’s production of The Magic Flute at the theatre in Brive, our daughter phoned for a chat. I felt it was time to announce the bad news. After all, it had been five days since we’d last seen her, balancing on the diagonal beam. She phoned again later in the evening, when I was half way through a documentary on the wonderful American photographer, Saul Leiter. I was busy urging her to explore his work for the benefit of her explorations in colour when there was a crash of the cat-flap, followed by a familiar high-pitched yowling. Daisy was home and hungry enough to eat a marmot. I shared my joy with The Daughter.

Next morning, Debs and I speculated on Daisy’s whereabouts during her week’s absence. The wild wood? Nothing so prosaic. She had been to an annual Cat Festival at Gramat, the self-styled capital of the causse. Cats from all around gather to run through their paces. Daisy, she reckoned, had won the blue-ribbon event of ‘speed-mousing’, whereby cats lay in a neat row ten rapidly killed mice for inspection by the judges. She’d done pretty well at the branch-balancing event and earned a mention for the ‘endurance-licking’. (She has been well trained by her sister.) The cat that can endure the attention and saliva of another cat for the longest period before getting into a fight wins the event. But she wouldn’t have been brave enough for the mad dog event, which requires a cat to stand its ground on the tips of its claws with fur done up like a hedgehog. More an interested spectator, we surmised.

So now we know. Our friends have moved on to Burgundy and Daisy’s back in town. Back from Gramat. Back on my lap, tired out but triumphant. Normal service has been resumed.

I hope your cat managed to spend a little time with you, Victoria. It's not a good sign when the dog doesn't recognise the cat.

We had a cat, who'd been rescued from the forest, who'd take off every summer, would come back after a week or two, thin as a rail, eat for France for two to three days and disappear again. As soon as it got cold she'd be back again.

One year she was gone for over three months and we thought something had happened to her. There was a familiar yowl, my husband opened the door... and my dog chased her out of the garden.

She came back the next day and that time the dog recognised her.

Thank you Jo Anne and Marie-Antoinette for your kind comments. And Steve, thank you as well. That's an incredible story: 8 to 10 weeks later. Mind you, friends of ours near here moved home and their missing cat turned up at the new home almost a year after disappearing. Incredible. Someone should make a Disney film...

We once lost a cat for about 8 or 10 weeks. Main suspect was my sister and BiL who left us with their caravan the day the cat wandered off. We thought we'd never see him again but one day just as I was leaving for work, he reappeared looking very thin but was soon back to full health. We always assumed that he wandered into the van as they were packing and didn't get discovered till they stopped for the night.

Excellent story - thank you for sharing.

Mark, what a lovely story, I know how hard it is to miss a favorite animal, we certainly can get attached to our furry friends, we can miss their warmth on our lap, we have a neighbor cat who has adopted us, she.. comes in our yard as soon as she hears us outdoors, she drools of excitement when we rub her head and sides