This is the time of year when everyone exchanges their best wishes. Over time, prompted by the locals and my desire to participate in the game, I have graduated from a simple cheery ‘bonne année’ to a rather more sententious ‘mes meilleurs voeux’.

The trouble is, it doesn’t stop there. Yesterday morning at Martel market and then again at the new improved Intermarché, I was reminded that the meilleurs voeux are just the gateway to a whole rigmarole of hopes and wishes that lead the conversation inevitably to health matters. ‘…And good health above all. Yes indeed, you can have everything else, but if you don’t have good health blah blah blah…’ Out waddle all those duck-billed platitudes that get passed on down the generations. When, without a hint of irony, some polite and earnest teenager comes out with all the bonne santé stuff, it does make you question the spontaneity and sincerity of it all.

I suppose the ritual is hardly surprising, given how seriously the French take the whole business of health. And my God, what a business it is! I hadn’t appreciated just how big it was until a visit one day to the little converted bread-oven in the village where we used to live. It was owned by a deeply unpopular pair of French holidaymakers, whose mere presence would stir up the sleepy village two or three times a year. Les Parisiens, they were referred to with a certain heartfelt contempt. It used to make me feel slightly better about our label as Les Anglais. In the caste system of outsiders, we didn’t appear to be quite so far down the pecking order as the Parisians.

Anyway, one day in their Wendy-house, I witnessed a shocking scene. It was aperitif time and while Monsieur Parisien poured the drinks, Madame fetched a carrier bag from which she produced, like a magician pulling object after object out of a top hat, packets and sachets and multifarious containers of medication. By removing one or two pills or soluble capsules from each, she built up a little multi-coloured heap in the centre of the table. I can’t remember whether this was for her alone or for both of them. The thing is, I don’t believe she was particularly ill. She was just a run-of-the-mill native hypochondriac.

It’s a big self-perpetuating business that’s bleeding this country dry. The laboratories produce all this superfluous stuff – pills to counteract the side-effects of all the other pills – and then push them with incentives to surgeries, clinics and hospitals throughout the land. Doctors then prescribe them to their patients, who use their carte vitales like credit cards to offset the crippling cost of all this gratuitous medication. Too late, the politicians have woken up to the need to wean the populace off their doctors. It’s way too late now: they’re hooked. Such is the culture of dependence that people – as we all well know – will go and see their doctor if they catch a common cold. (I say: catch a common cold and put it in your pocket, save it for a rainy day…) 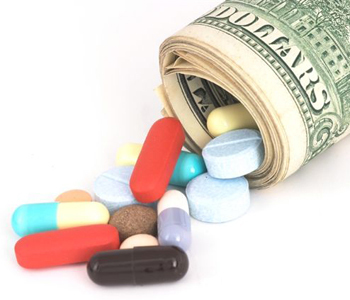 I know that this is no startling revelation to anyone who’s lived in this country and observed the natives at work, rest and play even for a few months. But I thought about it the other night, after talking to my pal in New York. Despite any of the new Obama health reforms, the fact of the matter is that, in comparison to the American populace, the French have no idea how lucky they are. My friend has a health problem and he is currently out of work. While he was in work, something like $700 was deducted from his pay packet each month. Not only that, but now that he is unemployed, he has no accrued rights whatsoever. He can, of course, retain his rights if he can find a further seven or eight hundred bucks per month during his unemployment. He chose to waive that option. And now he finds himself with a medical condition.

Without insurance, if he wants to go to see his doctor – who is apparently a fairly average doctor and certainly not a doctor to the rich and famous of the Upper East Side – he has to pay $300 for a ten-minute consultation. This same doctor arranged a test, which was not a particularly complicated one. He then presented my friend with a bill for something like $3,000. Without wishing to rub salt in his wounds, I told him about our local doctor in Martel. A highly qualified homeopath and a very conscientious man, he charges €38 for a good hour of his time. Part of this charge is then reimbursed via the carte. For a Brit like me, raised to be self-reliant and accustomed to hard-pressed NHS doctors who get out their prescription pads as soon as you open your mouth, a doc like this (or a toubib, as they say) is a revelation.

Talking to my friend about health matters led me swiftly to a couple of conclusions. Firstly, America is clearly no country for old men and my friend needs to get back to Europe before he reaches that stage of his life. Secondly, for all my quibbles about the French national health – people’s obsession with the subject; the tyranny of Big Pharma and the medical mafia; the child-like dependency on doctors and a general lack of personal responsibility – we are blessed with a system here that protects the haves and the have-nots alike. It’s comforting to know that if you develop a serious health problem in France, the treatment won’t bankrupt you – even if, over the course of time, it will probably bankrupt the nation.

Just hoping that I don't have to test out the system too profoundly, Catherine.

That is so true Mark and is one of the things I appreciate enormously about living here.