Help / reassurance/ advice/ hugs needed…
On the 10th April we sold our British registered motorhome to a French family here in France. It was on the advert and were also made sure we told them when they came to see us and that they would have to do the import. They bought it, we filled the paperwork or and even on the receipt I wrote that they would be responsible for all expert fees and duties. At every stage we told them. This was not a language problem as we did it in French. They are now saying that they didn’t know it was going to cost them import duties and that they don’t have the money and they want us to use our quittas fiscal to import it, which obviously we are not going to do. They now day that they are going to invoke their right to null the sale as it is within 14 days. I could get all emotional but it won’t help. We believe we have done everything correctly, including sending the export section off to the DVLA. Hey if we had been financially able to keep it we would have imported it ourselves, kept it for the obligatory 12 months then sold out for fast more money. Do we have a leg to stand on? Do they have a right to return (we don’t think so). Thanks

If you have already obtained a quitus fiscal then you are on record as the importer.
This means that you will have to complete the registration process before it can be sold to someone else.

Interesting. The person who has been doing that for us and who is qualified (it’s her job) and has access to the ANTS system, said that we were ok to advertise to sell it. Oh fffff…

Sorry Vivien but I agree with @anon90504988 . Importation requires a quitus fiscal and it’s in your name, so you are the importer.
The person who advised you is correct. You can of course advertise it for sale but you still have.to do the necessary paperwork to import it. The people who purchased it, did so in France so they are not importing the vehicle.

Even though I have done it from my UK address which is the one on the v5? Ok thanks

Frankly, if you have a quittas why didn’t you register it? You’ve dumped them with unnecessary expense.

Do we have a leg to stand on?

they want us to use our quittas fiscal to import it, which obviously we are not going to do.

Whyever not? That’s rather underhand.

This has always been a supportive place, I am genuinely in distress and asked for genuine information not abuse. I don’t understand the hate. I didn’t say I was right or wrong, I genuinely don’t know and am in very bad place mentally, it’s Sunday night so I can’t phone any office. Why are you being like this? Admin surely this isn’t right ??

We genuinely intended to import the vehicle. We got one CoC but needed the second one (it’s a motorhome so has 2 manufacturers, different from a car). We started the process in October. We still don’t have the second one. Don’t know if you noticed but a little pandemic had ruined the world and made us effing skint. I live in an area with a lot of ex pat’s and there’s a high chance of them driving to and from the UK and might have wanted a cheap motorhome. We didn’t choose who wanted it, they choose is and understood they would have to import it. The QF is a statement of tax status. Someone else cannot use it because it is not in their name.

Why are you judging what you don’t know, this isn’t Facebook.

This post was flagged by the community and is temporarily hidden.

they want us to use our quittas fiscal to import it, which obviously we are not going to do.

Whyever not? That’s rather underhand.

And I still think, with the information you have given here, that you don’t “have a leg to stand on”. You did ask.
I don’t understand why you don’t use your quitus fiscal to import the vehicle yourself dans les règles, then sell it, you could have an agreement to sell it immediately, as soon as it is legal here.

We got one CoC but needed the second one (it’s a motorhome so has 2 manufacturers, different from a car). We started the process in October. We still don’t have the second one.

Then you can’t just pass the buck on to these people, it seems a lucky escape for them, really.

I don’t believe anyone is being abusive. You asked a question and we all responded. I’m aware the answers were not what you wanted to hear but that’s the way it is.
You can still sell the vehicle but you need to complete the necessary paperwork first. Yes it’s a pain but it isn’t impossible.

I would also add, that a lot of people are having a difficult time with this pandemic and everyone is doing the best they can in the circumstances.

TBH Vivien this is unfortunate but with the demand for motorhomes it could turn out that you have had a lucky escape. It’s unlucky you didn’t know this sticky bit of French bureaucracy and I’m sure your buyers weren’t aware either till they looked into it. Since they want to undo the deal, unfortunate as it is, perhaps let them slip through your fingers?

If the only way forward is to complete the formalities then it sounds like your price will be higher at the end.

Now for my idiot question. Is it practicable for one of you to return it to the UK where there are also lots of eager buyers for motorhomes right now? I have a nasty feeling that’s a “no” as “quittus” looks like some kind of tax receipt that’s been paid? Boris has promised to review the ridiculous Day 2/8 test pricing so costs may go down slightly soon for a run back so I thought I’d ask.

“quittus” looks like some kind of tax receipt that’s been paid?

It is just a certificate which shows that there’s no eg vat outstanding on the vehicle. Depending on the age of the vehicle/how long you have had it/if it is new etc you might have to pay something to get it, very often you don’t pay anything, I never have when importing my cars from UK and Germany.

Sometimes, it’s less painful to tell it like it is rather than faff about raising false hopes.

This has always been a supportive place

It still is but if you feel you have been abused, you have the option to report it formally to the Team @cat

Not all campers are difficult to import.
If yours has a full coc from the manufacurer (i.e. Swift, Hymer, etc) you do not need one from the engine/cab maker.
Availability of a coc depends on date of manufacture & what kind of camper too. Home made van conversions or professional conversions based on a van can be more complicated.
Here is an example of a coc from Swift which had a cab & running gear from Fiat. 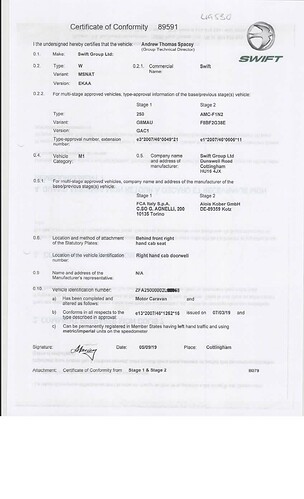 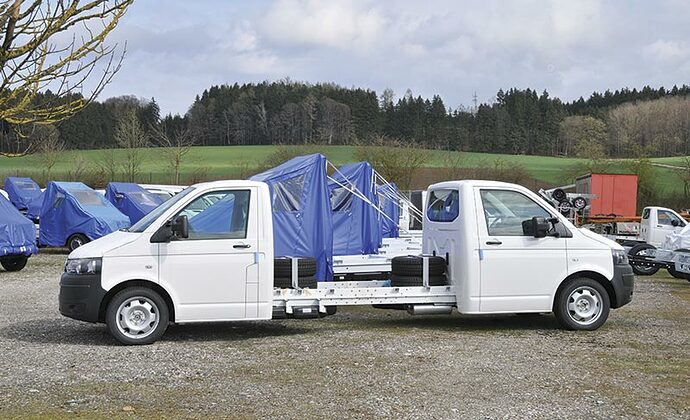 That will make reversing a lot easier, though the living quarters will be a bit cramped Mark

Vivian I think you did get genuine information, I’m sorry it wasn’t the information you wanted to hear and I’m sorry you’re in distress. But I think the sooner you resolve this the better for all concerned.

On the right to return piece, and I didn’t know this until really recently, but apparently the 14 day cooling off period applies to any sale, private or by a company. Afterwards it becomes a civil matter if the seller refuses the return, so it’s hard as a buyer to enforce that unless willing and able to go through the courts, but there you go. (Found this out because someone I know bought a car online and had it delivered, but it wasn’t as described. He foolishly accepted delivery, so now it’s a mess, but he’s told the 14 days still TECHNICALLY applies, even though it was a private sale. Who knew? I didn’t!)