Hi!
Since moving to department 53 (Loire) I have been treated to a few local homemade beverages from neighbours.
One, I believe, is called Eau de Vie, which is wine, fruit or walnuts, sugar and left to infuse for 12 months - I’ve been given walnut (like a lovely dark sherry taste and cherry, almost like cherry brandy. Both totally delicious.
However, my wonderful builder/local farmer, has given me some of his own homemade tipple, x 2 actually. One is made from quince and the other is pear (Williams, to be precise!). To say that it blows your socks off is an understatement, and is definitely an acquired taste (it does actually cause blisters on the roof of my mouth

). It is colourless and has no discernible odour. Has anyone come across this before and, if so, do you know what the base ingredients are?
In return, I have introduced him to Southern Comfort, noticeably absent in local supermarkets here. Obviously, Janice Joplin will follow

The rocket fuel is the eau de vie, fermented anything and then distilled (has to be "professionally " distilled, usually a mobile wood fired still, with customs dues paid)

What you describe as Eau de vie is actually vin de noix. You make it with wine and young green walnuts collected before 14th July, plus a bit of eau de vie to give it oomph.

The other drinks you describe are the eau de vie which are strong! There is still one mobile licensed distiller that does the rounds here so you can distill your excess fruit - apple, pear, etc. Rather more people round here have bottles of eau de vie despite never having been seen near the mobile distiller….One asks no questions.

You have to make the distinction between an eau de vie a distilled product of a ferment. Thus calvados is a distillate of apple or cider ferment and a ratafia which is in it’s simplest terms is something like the British sloe gin. That is a maceration of fruits in a spirit base the whole thing not redistilled. I well remember our neighbour a vintage tractor enthusiast having been presented with a book on the first British tractor by my brother in law an agricultural engineer turned up some months later with two bottles of “battery acid”. He explained his friend in Normandy had a still so one bottle was Poire battery acid and the other Pomme. Alas the travelling still has more or less now disappreared but where it does still exist you can still turn up with your wine or cider ab have it distilled for your own use 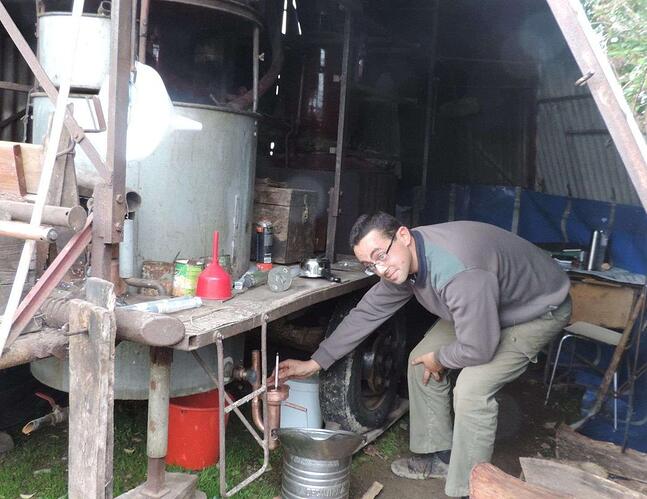 That’s very interesting. Somehow I can’t see my ‘supplier’ conforming with any revenue legislations! I think I’ll need to quiz him

I’ll need to quiz him

Ha ha… beat me to it

Battery acid is an excellent description!
I really must quiz him more about it

You make it with wine and young green walnuts collected before 14th July, plus a bit of eau de vie to give it oomph.

I don’t put wine in ours, just eau de vie. It needs a bit of watering down though. Everyone has their own recipe.

I have some Calva a friend’s mother’s neighbour makes in Normandy it is amazing. You don’t want to be within a metre or so of a naked flame though.

all this has reminded me of a wonderful tour “up North”… and I’ve posted the link in the “What’s On” thread.

Eau de vie and lots of cidre apple stuff … and a lovely place to visit too.
Edibles of all sorts, home-made and all bio… hurrah.

I don’t put wine in ours, just eau de vie.

I think my liver prefers our recipe!

Eau de vie is not wine infused with herbs, nuts, etc - that would be considered a liqueur.

Eau de vie is made from the distilled fermentate, variously of fruit, potatoes, grain and whatever other vegetable matter happened to be lying around at the time when it was put in a vat to ferment.

The strong stuff you mention is quite simply called “Poire”, “Prune”, “Raisin”, sometimes with the designation "eau de vie à la/au ". In some regions, it has a specific name, e.g. calvados for Normandy, mirabelle for Alsace-Lorraine, “Poire Williams” for a specific type of pear brandy, “marc de raisin” for anywhere where there are vineyards, etc.

FWIW, we still have an ambulant still/distiller, which should be setting up shop any time soon - usually stays for about a month. 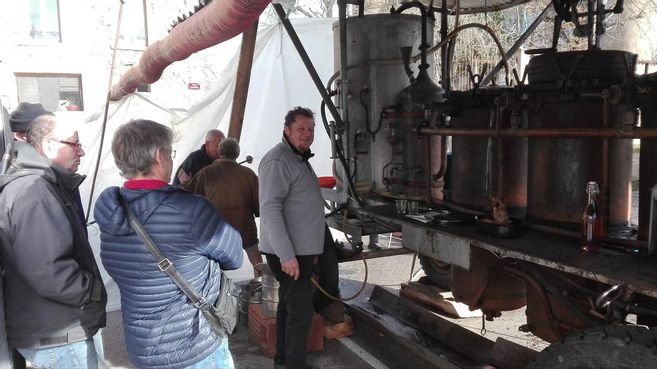 Seems like we have a guy about 10km from us. He isn’t an ambulant, he has his still in an outbuilding. We had about 18Kg of strawberries last year. Should be more this year, so I wonder if they will distill a strawberry brew

I’ve made quite a few alcoholic drinks in my time, from the usual sloe, damson and rhubarb etc, to pear, wet walnut liqueurs, and gorgeous quince cognac but my latest is sublime and like so much of the best stuff was born of needing to make use of things.

500ml or so of Palinca given to me by the parents of my son’s Romanian gf’s mum and dad. We did partake one NYE primarily to able to send the video of us doing so to them. But it had a distinct whiff of lighter fuel about it that I couldn’t quite get over

A bottle of ancient, 30 years at least old, bottle of Pineau Charentes inherited from my dad’s cellar which needed to be centre stage. It was still perfectly good but very heavily sedimented so probably only about 500ml from that.

Macerated in a kilner for 6 months then bottle in the glorious Pineau Charentes bottle.

It’s barely two years old and totally sensational. People are begging for a sniff but I remain resolute. It’s going to France where it will go down a treat however hard I try to eke it out.

I’ve labelled it vin d’orange which it patently isn’t but nothing else works to describe the burnt, steely, bitter, orange tang.

Obviously I’ll never totally be able to recreate it. But it’s so extraordinary, it’s worth trying with some subs.

I’m intrigued by the cardamom pod - may have to do some experiments.

It’s fun to try different things with local ‘lighter fuels’ - we had some Bosnian rakia that wasn’t really something to drink for pleasure, but apples, a little honey and cinnamon made it very much nicer.

I barely bruised it. Just wanted the lightest of touches and even my son who has an excellent (and young) palate couldn’t guess it.

That is inspirational! There are all sorts of weird bottles at the back of the cupboard that might respond to a similar treatment.

(Edit…amd a teeny bottle of palinca!

. But also a bottle of Unicum which might be a step too far!)

I don’t know what Umicon is but if it’s worse than Palinca, it may well be a step too far….