How much should a room only holiday rental be?

My son, now gratefully installed in a very clean and cool private house where the owner lives, and I are wondering roughly how much to expect in charges for this, or does he make an offer or ask?

He has a spacious room with remote controlled shutters and a bath room and toilet right opposite his door.

If he had a rough idea I would ask for him, but would be useful to have an idea so the answer wasn’t a shock, in either direction.

Frankly, I think he should ask the question…
and I am just a little surprised that nothing has been discussed/mentioned prior to him arriving.

I have hardly ever seen the man, the original offer was made via another friend when they couldn’t put him up at New Year (they run an airbnb) which was foiled by the short lived total shutdown on entry from England.

Then revived at a chance meeting in the street when there was only time to ask if it was ok for the 1st of August.

This is not a commercial arrangement, it was a favour for a friend of a friend when no other suitable accommodation could be found. If nothing is said Davey will offer him a ‘suitable’ amount at the end of the stay together with a gift of a bottle of something.

But it would be useful to know what a commercial rate for a one week stay without anything other than the room provided would be. I don’t have a clue. With that knowledge I could then approach him with the question.

It does slightly depend on location, so you could google chambres d’hôtes + your area and see what they change a night. And then take off €10 or so for breakfast, plus a bit more a staying for a few days so not needing daily bed change.

This site suggests average is over €60, which I think is high but will be skewed by the really high end places. Since it’s a casual arrangement I would be thinking more of €200 -250 for a week. 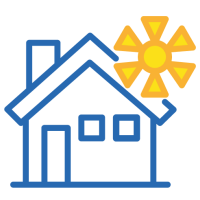 Thank you Jane, that is very helpful, and probably in line with our thinking though we neither of of us really have any idea.

I’ll do that shortly, or I could ask the mutual friend who runs the airbnb, but she was herself on holiday in Cannes when I rang on Monday after learning that J-C was also down south and had apparently forgotten about it. In the bar then I was told he would probably be back on Friday but then Parry, our friend, said she had contacted him and he would be back late Tuesday, which turned out to be the case.

So he may have come back early from his own holiday after having his memory jogged. Another fact to throw into the mix when approaching the question.

It is a strange history. We knew the longtime but increasingly elderly owners of the bar, since 30 odd years. Then Paulette died, Yves retired and later went into a home, and Patrick the son had no real interest in his inheritance. Eventually 2 different couples ran the bar on rent and both expressed an interest in buying. The figure was never acceptable so both disappeared to pastures new. Then the now derelict place suddenly showed signs of builders and a re-open time moved further and further into the future until finally I picked up a rumour that it had been bought by a consortium in which Parry and J-C featured. Apparently it was a nightmare inside and needed complete re-wiring and other repairs before finally opening after a couple of years. J-C and a woman called Isobel (these are all from the same small hamlet within our commune) appear to be running it between them and it is again a very popular spot.

I had dropped Davey off at 11pm on Tuesday because I needed to show him the house and the bike he has hired has no lights, and was surprised and re-assured to see inside it for the first time, having known a previous resident, long dead, over many years, but had never actually seen the place, tucked away as it is from what passes for the main road.

Edit: I think you might be spot on with that figure after doing a little research in the area, so we will hold that thought while approching J-C with the question later in the day.