Is the UK on the road to economic disaster?

Its my niece and nephews I feel for in the UK. One nephew lives in a converted gardenshed in my brother’s garden as there is no room in the house and all the others live with parents apart from a nephew who has a house but half is owned by a housing project and he pays the other half via loan, what happens at the end I have no idea as the older you get,the less chance of any sort of long term or big loan. 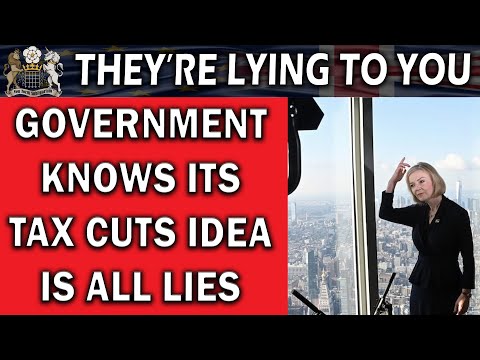 Rather takes the shine off democracy.

It’s awful for your family, living in a shed can’t be good for their health, it must be very concerning for you . I wonder how much longer people are going to put up with the systematic destruction of their lives?

It’s what happened in the 1970"s again to a large extent.

I thought “trickle down” had been largely discredited some years ago. I mean who would actually believe the majority of the rich would pass down wealth voluntarily. No they will call for more immigration frpm poorer countries to limit what they have to spend/share. It’s perfectly logical really.

So like John I think it’s about paying Tory backers.

I’m certain it’s all about their rich friends Karen, can’t have the venture capitalists, disaster capitalists and major shareholders missing out.

The thing is, these people are already rich and earning more money than they can possibly need, yet very little seems to trickle down. There seems to be a blockage at around the level of their wallet. If a pipe is blocked, the answer is not to pour more and more water down it. That is a waste of water. The answer is to find a way of getting rid of the blockage.

Money is power, the more money you have the more power you gain and I think that is what becomes the overriding objective.

They need people to spend money to drive growth as it isn’t coming from anywhere else, so making it easier is what they want. It’s what many previous governments have relied on. Trouble is that much of this spending needs to come from ordinary people, who have to borrow to spend, and with rising interest rates, that will be difficult. The people who actually have most of the money aren’t going to be driving growth by spending much more than they already do.

Reaganomics didn’t work for Reagn, and are unlikely to work for her. Give a tax break to the rich and they may well stash it away or spend it on expensive, often imported,
goods… Give it to the poor, they’ll need to spend it and so it is going round the economy, increasing demand, thence production.

I see that Ms Truss has adopted “authoritarian” as a boo-hiss word.
She has done it several times now including when she explained to the UN that Trussonomics is all about growing the UK economy in order to be strong enough to fight authoritarian regimes.
In effect she is imposing on the UK policies that almost certainly the majority do not want (tax cuts for the rich, fracking, massive borrowing, benefits cuts) in order to stop governments imposing on their countries things that their citizens do not w,ant.
I cannot decide whether she really cannot see what she is doing, or whether she thinks that putting this spin on it will prevent other people from seeing it. I suppose it is the latter.

“We’re rapidly sliding into fascism, if we’re not already there.”

The words of of a teacher at Clyde Valley High School in Lanarkshire, who has taught there for 22 years, but was suspended on Tuesday for asking his class if they thought it was a good thing that media coverage of the monarchy over the previous week had not included any dissenting views.

“It’s something that I would always be free to talk about, and wouldn’t get any sort of complaint.”

Or see this report today: 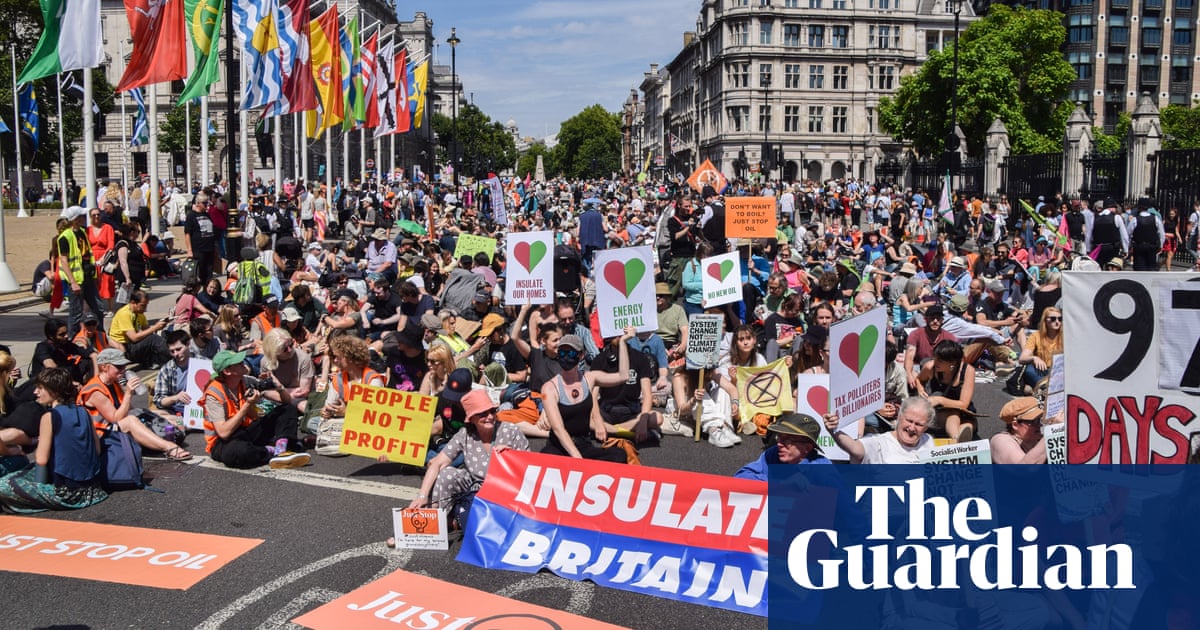 I was particularly struck by the story of Louise Lancaster, a 56-year-old former teacher from Grantchester in Cambridgeshire, denied even her right to a phone call to let her husband and son know where she was being held…

“How many doctors, scientists, plumbers and grandparents are the government willing to put in jail before they face the truth that we must just stop oil and gas?”

So it is indeed a bit rich for Truss to talk about authoritarian regimes elsewhere !

Yes.
You see it worries me that the government spends huge amounts on very good PR and media companies who know exactly how to manipulate the public. It is a strategy that I have used seen before, to identify your own failings and then point them out in other people or places, the implication being that the fact you are condemning these failings in others proves that you do not share them. It is a smoke screen. I am very uncomfortable indeed with the suspicion that the UK government is making a policy of manipulating the people they are supposed to serve, and the policy is succeeding.

Indeed. Just this minute my wife has come in and turned on the BBC news, and I caught a reporter commenting on the government’s ‘plan’ to help the poor not by redistributing wealth, but by helping the rich to grow the economy so there’s more for everybody - and he concluded by saying we won’t know if this will work for years. It was the old BBC idea of ‘impartiality’ as giving equal weight to both sides of an argument. But there is a huge amount of existing evidence (some we discussed earlier in this thread) that it won’t work - it has been tried in many places many times before, and has (as far as I know) never worked. What stops the BBC simply saying this?

So what we have in the UK is most of the media owned and run by foreign or tax-exiled billionaires only interested in it for right-wing propaganda, and the little that remains of mainstream media wedded to an idea of impartiality that does not include actually telling people the truth.

George Monbiot, as always, has the detail: 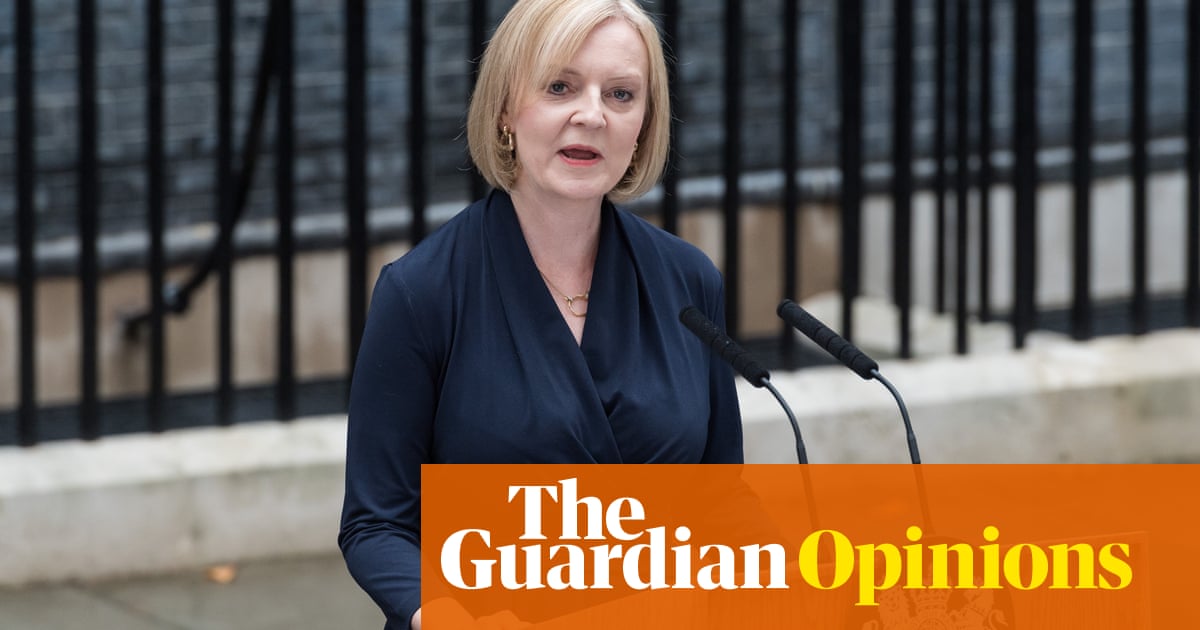 Has Liz Truss handed power over to the extreme neoliberal thinktanks? |...

The prime minister is in hock to rightwing lobbyists who are themselves indebted to oligarchs and corporations, says Guardian columnist George Monbiot 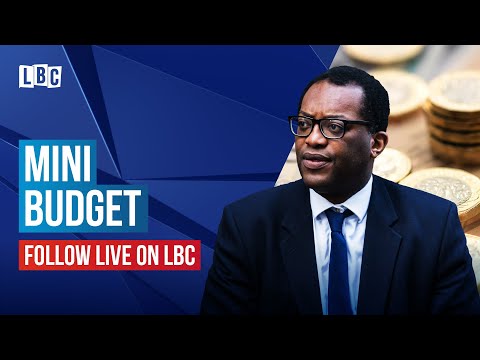 and after this bit of financial madness, the pound sinks further

The Bank of England and Kwarteng are at war with each other. That can only...

The Mail has this front cover this morning: The implication is that boom times are coming and that growth is going to happen. That is Kwarteng's approach to economic management. He wants to provide a stimulus by injecting more money into the... 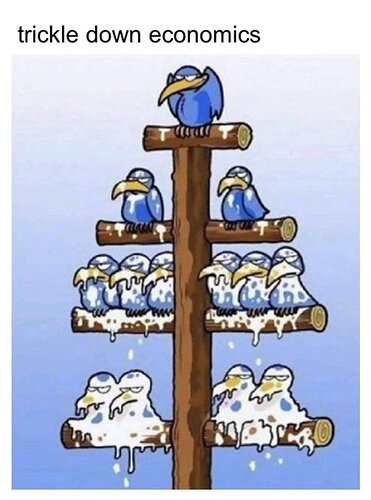 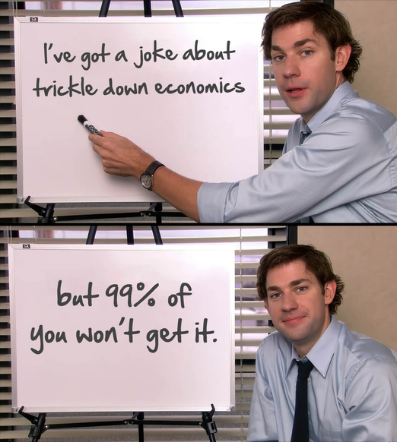 I rather like the little cat fight going on below in the Tax Research UK blog.

I note, before being very rude a sentence should begin with
“Respectfully, &@%#*€<~…

Who in their right mind could think this is right? 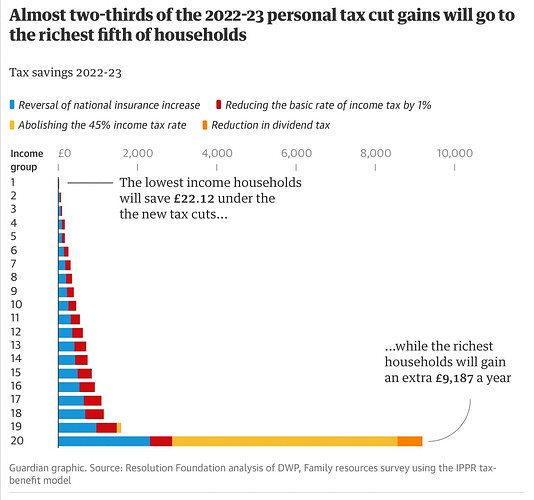 Larry Summers, a former US treasury secretary, said: “It makes me very sorry to say, but I think the UK is behaving a bit like an emerging market turning itself into a submerging market.”

He told Bloomberg: “Britain will be remembered for having pursued the worst macroeconomic policies of any major country in a long time.”

The more I think about it the more the argument for low corporation tax escapes me.

Corporation tax is levied on profits, no?
The less a business invests, in jobs and wages and research and equipment, the lower its outgoings and the higher its profits and the more tax it pays.
So logically, high corporation tax is an incentive for a company to invest more rather than pay more tax, and low corporation tax is an incentive to invest as little as possible, pay low wages and squeeze max profit out of the business because the tax burden is relatively small.
I am sure Kwarteng and Truss are aware of this, what else are they seeing that I am not? Or do they actually want to attract to the UK the kind of business that is all about profit and not about investing in people?