Isn't anyone watching the Tour...?

I'm a week into my summer ritual of spending far too much time glued to the Tour de France and this year is already turning into a classic. Some great sprints and the usual first week tension and nerves resulting in the unfortunatley too numerous crashes, yesterday's knocking out current Olympic champion Sanchez and dashing his hopes for a repeat performance in London. But while it seems that everyone on SFN spent yesterday watching a mix of the grand prix and wimbledon, I seem to be the only one who wasn't and who was watching the world's greatest cycling race, and the world's third biggest sporting spectacle after the Olympics and the World cup (Football) both of which finish a long way behind the Tour in my book but I guess I'm biaised! What's more, we're all lucky enough to have some of the best live coverage everyday on France télévision! We've already seen Cavendish sprint to victory, two days ago Wiggins took the yellow gersey and Froome won the stage. And yesterday's "casse-pattes" stage was a cliff hanger right to the end and Pinot, the Tour's "benjamin" at just 22, gave France it's first winand Wiggins showed his fantastic form and is still in yellow. Today should see Wiggins go head to head with Cancellara for the stage, time trials don't make for great TV, but the top riders should liven things up and as Wiggins will be riding last, he'll be against the clock and against all those who will have already ridden - suspense all the way. For those who want to know a little more about what makes France tick through July, get out and see a stage near you, ge there early with a picnic, see the caravan and scrum down for the free-bees, then see the riders, the world's best, for free, and appreciate top level sport and the speed they pedal at ;-) 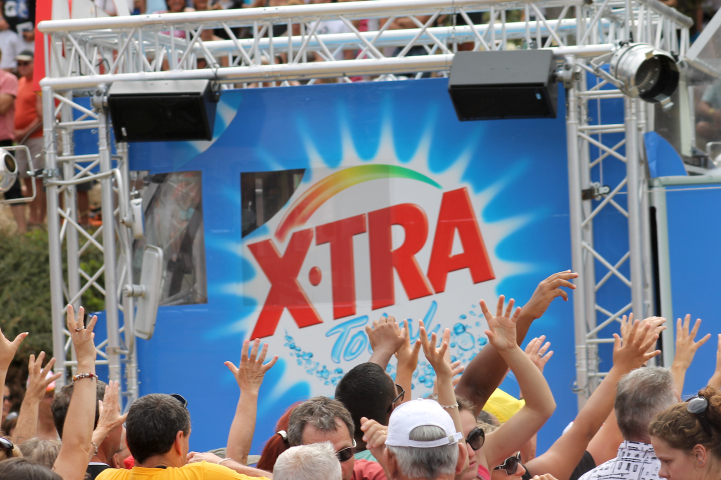 I have..... nice to see such a display of athleticism... not the cyclists, but the crowds leaping and diving for the free sachets of stuff being hurled from the parade of Promo wagons.... I was quite safe however, having donned 2 layers of Spandex ( for security )

Thanks again David, I look forward to that on Wednesday. We'll put our watches back when we get on the ferry ;-)

Hi Andrew. Highlights of TDF is ITV4 19.00 to 20.00 BST. So don4t forget to change your watch! Commentary by Phil Ligget and Paul Sherwen and others. Analysis by Chris Boardman.

Excellent, saved! thanks for that David ;-)

Don't worry Andrew it's covered live on ITV4. We don't have French TV currently apart from what comes down the internet connection so we have been avidly watching via ITV4 on freesat. There's also a roundup every evening of about an hour.

ha ha, I knew I could count on you and Johnny for some support on this one Terry ;-) Funny how we're travelling tomorrow which just happens to be a rest day...! Worried about no coverage in the UK though :-O

Just don't phone me between two and five any afternoon while the tour's on, Andrew. You'll get short shrift from both self and wife. I got addicted back in the 70s when I spent nine years reporting the tour. But oddly it was only quite recently that we went as spectators to see a stage. Totally different, huge fun and no stress about being first with the stage winner, the yellow jersey and a fast 300-word summary of the stage! I didn't watch Murray (foregone conclusion) or the grand prix either.

I couldn't have watched the tennis either but I wouldn't have done even if I had canal+, yes, as you say Johnny, it really is a cultural event and all the non-cyclists i've taken to watch it or have told to go and see it have come back converted and saying "now I understand, I'd never have believed it was such a fête, an event, etc". And yes, stop snorting Brian! With you on cadet, who's cadet...? I think BFM should rethinbk their vocab, he's definitely the benjamin ;-)

got ot go and start packing - off to the UK tomorrow, haven't been for a couple of years and hoping it'll be the "déclic" for the kids to get them speaking a little english!

PS - this post is partly a result of France 2's report showing that the UK seems to have no interest what so ever in the Tour despite having one of the strongest teams (SKY) which includes the world champion Cavendish, the favourite to win the Tour and now yellow gersey holder Wiggins and a stage vistory from Froome too. Wiggins was a little "gutted" when he saw the reports, the newspapers with almost no coverage etc. Yet a few men standing around in a field for 3 days throwing a ball around and ocasionally hitting it seems to get pages of coverage, yawn, yawn, is that really sport...!