Is everyone watching the footie?

Have to admit that I’m not - never interested me that much and when England “fans” start booing the national anthems of their opponents I just cringe and want to pretend I’m not English (difficult as I don’t think I have a non-English ancestor basically as far back as records go).

I see that we’re two goals up though - let’s hope we don’t do that English team thing of snatching defeat from the jaws of victory.

Yes, bit embarrassing when they boo. The football speaks for itself and after a shaky start, a solid and positive game and a great result

Do remember our French hosts will still be smarting after Monday, so perhaps best keep a low profile tomorrow!

Can’t support England, the fans are an embarassment and I wouldn’t want to be part of that. The UK tabloids will be excruciatingly unbearable tomorrow mornng. Unfortunately both(!) the teams I was supporting (France and Portugal) have been knocked out, so my teams are now Italy (could go all the way) and Spain.

A propos England, I tend to support individual players from my team rather than the entire national team (think that’s quite a common position these days).

Mannarino retired, not quite the same.

We turned over to TF1 from Le Tour and OH watched the whole match. I dipped in and out. 90 mins of football is just too much for me, unless France is playing, but the match against the Swiss was no fun. Never mind, they’re still the world champions. By the way, the winner of the stage to Fougères was… no spoiler alert this time…

I can’t support England politically, but sport is far beyond politics, and France were knocked out yesterday…

Ditto, my husband took down the French flag…thankfully before the England game

He’s playing a qualifier today, dangerous they always have something to prove.

I just cringe and want to pretend I’m not English (difficult as I don’t think I have a non-English ancestor basically as far back as records go).

And that feeling gets stronger when I see this sort of reaction to a young German fan, obviously upset at her team’s loss. 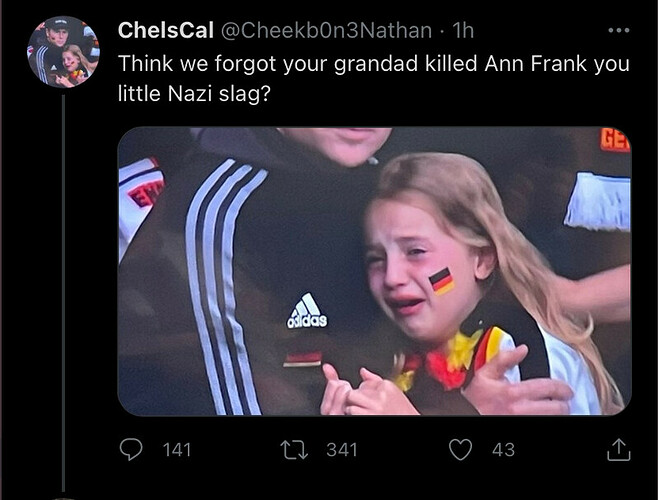 I’ve put spoiler tags on this because it truly beggars belief that anyone could be so hate-filled and vindictive. But that’s what we’ve become. Brexit and the division of society has given permission to right wing thugs to post like this.

Thankfully the account in question has been suspended - but there are other similar comments attached to the image. I honestly do not wish to be English, if to be English is to be so full of bile.

Sadly, this sort of behaviour - where the point is not merely to win but be ungracious having done so and wish only to grind your opponent’s face into the dirt to make your point is all too prevalent among Brexiteers.

That is truly shocking, and very upsetting. The only comfort is that that young girl will never see her distress featured in this way, unless she was involved in the thread of course. Thankfully unlikely, I hope.

but sport is far beyond politics

A commendably Corinthian assertion, but surely far too seldom the case
Whether it’s England fans singing ‘10 German Bombers’ or FIFA awarding the previous and upcoming World Cups to Russia and Qatar. Football is raddled with politics - remarkable that it remains such a compelling sport

I take the opportunity to introspect on my national loyalties. In this tournament, to my surprise, France definitely edged it over England - so by Tebbit’s ‘Cricket Test’ I am now French enough.

(In 1990 Tory MP Norman Tebbit crticised immigrants from India, Pakistan, and the Caribbean for supporting their ancestral homelands instead of the England cricket team, because he thought it evidenced their lack of integration in UK society.)

(In 1990 Tory MP Norman Tebbit crticised immigrants from India, Pakistan, and the Caribbean for supporting their ancestral homelands instead of the England cricket team, because he thought it evidenced their lack of integration in UK society.)

He had a point though Geof, if they were British born and at all other times asserted their Britishness when complaining that they weren’t foreign. Most British people I know grow up speaking like their peers, as I did, much to the irritation of my Southampton/Manchester (but otherwise accentless) parents at my strong Nottingham accent. I do admit to being impatient with Cockney lads with black skins talking as if they were in Montego Bay.

There are plenty of people of Jamaican, and other places, origin who speak the language of their country as a native, to prove that this is not natural. It is an affectation, a bit like those Northerners who think that, now they are in the South should pronounce words like ‘put’ as in ‘shut’, rather than the correct way as in ‘foot’.