Jules is a pensioner now!

Good news today is that Jules, our Dobermann/Beauceron/chasse dog, is at 8 years of age going into ‘panier retraite’. At least it has been offered to us and we have accepted eagerly. I don’t know of such a thing at any other rescue organisation, but PAD have it for certain dogs in the 2nd half of their lives who for whatever reason are not easily adoptable. Jules falls into this category because of his age, 8, his necessity of being attached at all times out of the garden and, to Dobermann lovers at least, the fact that he isn’t a true Dobermann.

As far as we are concerned this changes little, we will still pay for his keep here but PAD will continue to pick up all his vet bills for the rest of his life. Better than the most expensive pet insurance for us and the fact that I am relieved of the worry hanging over me till now of one day having to justify a rejection from an adopter who I didn’t consider to be suitable for him.

So with 3 old fogies in the same household it is a race to see who reaches the exit first. 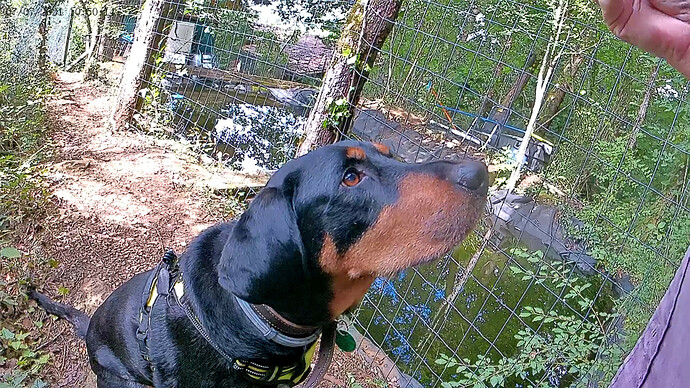 Not before I wrested the camera from its grasp.

In truth, non were present, it was taken by my very small GoPro held in my left hand. Really a snapshot from a video. (GoPro is a generic term, it is actually an Apeman)

However, I hope our one year old miniature poodle will keep us young too. Each ‘proper walk’ ie. along a footpath on the south bank of the Lot to the auberge in the next village and back is over 13000 steps. Would like to build up to doing it every day by the time I’m eighty!

Bit difficult to measure Jules’ coverage in steps because the reason that he cannot be let off is the 3rd of his ‘race’ descriptions above. He has chasse genes from somewhere and that means that, although otherwise extremely obedient in 3 languages (French, English and Perigord

) with a sprinkling of Franglais and Spanish for good measure (he spent much of his early life there which is where I found him over 4 years ago) his ears are completely blocked by his nose if there is any interesting scent on the ground. As a result when we walk in the forest he zigzags in and out of the trees (and of course I have to follow all these diversions) and in the 100 metres from the bottom to the top I reckon we cover 300. Now that the long grass has been at last cut between ‘our’ forest and the 2nd and 3rd ones we travel much further in the same manner.

So, a bloke fancies a pint and as a smokescreen tells his wife he’ll take the dog for a walk. He heads for the nearest boozer and ties the dog up outside.

He’s just ordering his second pint when another bloke bursts in and demands to know who owns the dog outside.

Our man admits it’s his and the other proclaims “your Chihuahua has just killed my Rottweiler”… gasp… “how?”. “he choked on him” Boom, Boom.

Well it couldn’t have been my Rottie (the one in my avatar), he was the gentlest soul you could imagine, but looked the part nevertheless, which could be useful.

I’m sure David. I just needed a breed as a scapegoat