Some of you may recall that last year I posted about Brownie having bald patches? Well I was thrown off track by Frizz biting her on one occasion but I eventually worked out that the bald patches were caused by her love of lying down in the parts of the field that were bald and rock hard, so she was effectively lying on concrete.

We then got a load of wood chips and spread them around to improve the mud situation - at times here it has been like the Somme - but I soon realised that this was also free bedding. We’ve laid more in places like the gateway. It lasts for a surprisingly long time (months not weeks) and doesn’t blow away. Even after it has effectively disappeared, the ground is in much better condition than before and the ponies love it. Here’s the proof! 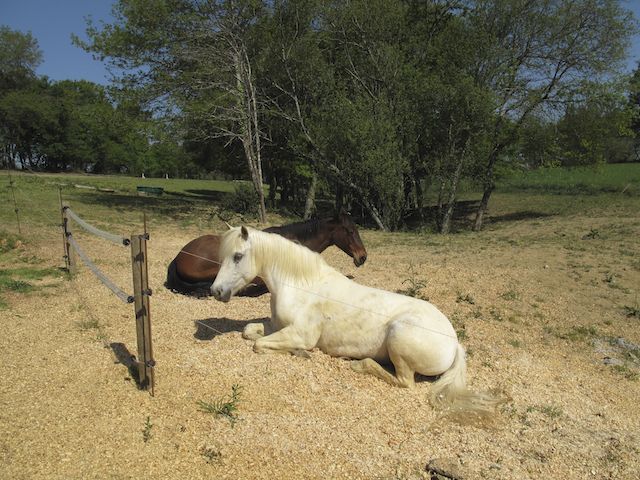 So if you have a woodyard in the vicinity, and a trailer, ask nicely if you can have some. They will usually be able to let you take it away in one of those enormous builders bags (which you'll then need to return) and if you have stables, you could potentially save a fortune on bedding!
Samantha_Brick September 17, 2016, 7:35pm #2

In addition if you know any nice carpenters in your area (or their wives!) ask them. I speak as said wife who has just cleared out her husband’s atelier, after this week’s work, and delivered six large bags to someone in exchange for untold amounts of their homegrown fruit and veg - result on both sides! x

They look soooooooo comfortable there!!!