Pass Sanitaire to continue into 2022 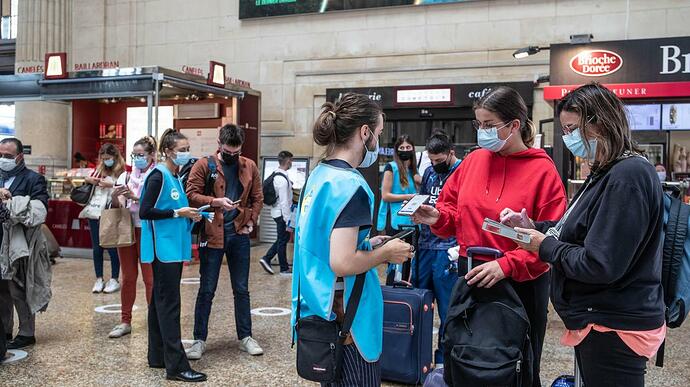 I understood this to mean that they now have the legal power to extend it (previous law was only up to mid Octobre sometime) but not that it will be extended. Other papers say it will be on a 30 day rolling programme.

15th November was the end date originally, I believe… the govt simply wants the means to continue their fight to control the health situation re covid over the winter months.

Must confess, I am pleased that they are not swooping to throw off restrictions etc simply due to the low covid figures which we are seeing at the moment…
as the cold/wet winter months are the time when covid will possibly be making its presence felt once again (doesn’t covid prefer cold temps or did I dream that)

Ate out yesterday, not asked for proof of vaccination despite a French group who came in a little after us being asked for theirs. Odd.

Do you really look as scarey as your Avatar ? If so then your appearance might have had something to do it.
I would be frightened to ask you if I was a serveuse.

Do you really look as scarey as your Avatar

Not at all, I’m very cuddly and would not scare anyone, honest.

I wondered if it was because we were obviously English - but all things considered that would make me more likely to ask, not less. Although there would be no way to tell that we were just visiting and were not resident (other than my French is pretty terrible for a resident, but some don’t learn the language well despite living in France for ages).

possibly just an oversight, since no business wants to be fined for not having checked (if the Gendarmes decide to pay a visit…)

Could have been - it was a different waiter that checked the French group.

I took the small to Burger King yesterday after his first tennis comp finished late. Last time i’d been with the other boy I’d been asked to show my PS. Yesterday it just came up on the screen 'have you and all your entourage got your PS? to which I had to confirm before carrying on with my order.

not asked for proof of vaccination

Same happened to us last week. Not asked at all. When we queried it, the lady said that as we were English, we would have needed full vaccination to be in the country, so the check was not necessary. She had assumed that as we were talking English to each other, we were visitors. When we told her we were residents, she looked a bit thoughtful about her mistake. Still didn’t check the offered docs though.
Edit: @billybutcher , I see that later in the thread, you assumed what I confirmed. Assumption that you’re a visitor. As you say, that should make it more imperitive you’re checked, not less.

As you say, that should make it more imperitive you’re checked, not less.

Whilst I agree with the sentiment… it’s not always as straightforward.

A few weeks ago, we came across a Waitress who was nervous/apologetic/afraid almost, when she approached us… and then very relieved when I told her nicely, but firmly, that she was doing the right thing… and showed both Passes.

I said it in clear French, just loud enough to pass to the ears of others I had observed and heard being most rude/miserable/rotten to her. (others present had been OK)

With increase in violence, I can understand her judgement… speaking English might well be one marker for a Waitress/whoever to decide that folk will be covered… and step away from a possible confrontation which might end badly. Not saying it’s right though.