Processionary Pine Caterpillar - what you need to know

Some information on the Processionary Pine Caterpillars currently a big pain in the backside in our area. There are a growing number of incidents involving pests in contact with these pets in the Languedoc - my neighbour has them in her trees disposes of the nests by burning them. I'm dreading seeing them in my garden as it means keeping the kids away from them as they can cause serious allergic reactions and both myself and my littlest one are very reactive to bites. They are extremely dangerous to inquisitive dogs and cats. One problem noted by people in my village was that many of the gardens of second home owners have these nest and they are untreated as the owners don't tend to come out at the active time of the year. So I wanted to share this for everyone to be aware that they are a pest under high surveillance and please do be careful and if you have pine trees please do control the nests.

Pine processionary moth (PPM) larvae (caterpillars) feed on the needles of pine trees and some other conifer tree species. In large numbers they can severely defoliate trees, weakening them and making them more susceptible to attack by other pests or diseases, or to environmental stress caused by drought or excessive moisture. PPM, like its close relative the oak processionary moth (OPM), gets its name from its distinctive habit of moving about in nose-to-tail processions.

Like OPM, PPM caterpillars represent a public health hazard because they have thousands of hairs which contain an urticating, or irritating, protein called thaumetopoein. These hairs can be blown by the wind into contact with people and animals, resulting in painful skin irritations and rashes and, in some cases, allergic reactions in some people and animals.

Possibly as a response to climate change, PPM has been expanding its range north through France since the 1990s, and is now breeding near Paris. Long-distance movement is thought to be associated with pupae carried in the growing medium or soil of infested plants. Climate change is thought to be responsible for the success of the moth's establishment once it arrives in regions north of its natural range. 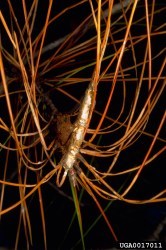 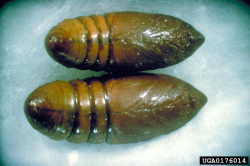 Pupae can remain in the soil for up to three years before the larvae emerge. This is the pathway by which it is believed that PPM was moved to the Paris area.

Adults of both sexes can fly, and natural dispersal depends on the flight capacity of female moths, which is lower than that of males. Average female flying distance is 1.7km, with a maximum recorded of 10.5 km. This is consistent with the rate of spread recorded in the south of the Paris Basin, which has been reported as 5.6 km per year. Based on the moth's current known distribution, the risk of natural spread into the UK is still low compared to movement with plants for planting. 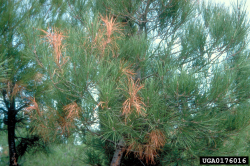 Defoliation of needles (right) is the main symptom of PPM attack displayed by the tree itself. Complete defoliation of needles can occur where there is a high level of infestation. Otherwise the nests formed by the caterpillars in January are the most obvious signs of the moth being present. Caterpillars feed at night during the winter, when fewer people are visiting woodlands.

The life-cycle of PPM is different from OPM's. PPM caterpillars overwinter in tent-like nests high in pine trees, and form processions on the ground in early spring before pupating in the soil until late summer, when they emerge as adult moths. This pupal stage can, however, remain dormant, extending the life cycle over two years.

The adult moths live for only about a day in the summer, during which time they mate and lay eggs in pine trees.

PPM larvae, or caterpillars, hatch in autumn from the eggs laid in the summer, and begin feeding on the trees' needles in autumn. 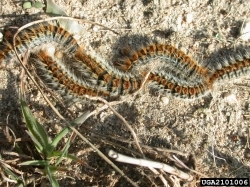 The easiest stage of the lifecycle to recognise is the larva, or caterpillar, which is hairy and coloured orange-brown with blue bands. Like its close relative the oak processionary moth (OPM),the larvae move about in nose-to-tail processions. 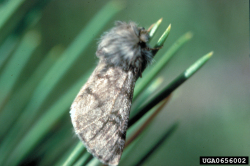 Adult PPM moths have cream forewings with brown markings, and white hindwings, but to an untrained observer they are difficult to distinguish from other species of moth. They are flying about May to July, and individuals live for only about a day, during which time they must find a mate and lay their eggs in the foliage of a pine or other host tree. 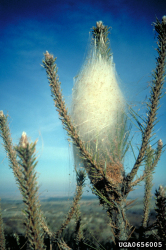 About January the caterpillars build distinctive, tent-like nests of white, silken, webbing up to the size of a football in the branches and foliage of pine trees, and there can be several nests in a single tree. The caterpillars spend the days in these nests, and leave them at night to forage on the trees’ needles. 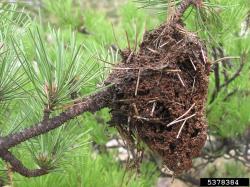 The nests can become damaged and discoloured over time (right).

In the affected areas take some simple precautions to help minimise the health risks to you and your pets and livestock:

I used to live in France but I now live in Spain, where we have lots of pine trees and sadly many dogs have been fatally injured by these caterpillars. Fortunately, we are not near the coast where there are 1000s of these nests. However, I reckon I must have cut down 50 nests before the caterpillars appeared - you'll see lots of little black eggs in a V-shape and must have cut down another 50 once the silken nests appeared. I collect the nests in a plastic sack and then transfer them into buckets of water for 1-month - this being the safest method,![](upload://lZG9oQOLW4Wc3glRBfPJISR3W8c.jpg) according to the locals. Burning should not be considered as the hairs are ejected and can be breathed in by pets and people. I was tempted once to remove a nest after a week in water, but quickly changed my mind when a caterpillar moved! The photo above of a trap was posted locally and I tried to fit one to a tree, with limited success. The folded plastic sheet is supposed to contain water. Will definitely try the other trap next year.

I too was attacked by 2 linked caterpillars 3 years ago in January - so quite early - which had landed on my back whilst pruning olive trees. I didn't see them when I removed my clothes and they left a nasty blister trail down my legs. It was an extremely painful experience, alleviated somewhat by taking a hay-fever tablet and using anti-histamine cream. Dogs are generally intrigued by the procession and will touch the caterpillars with their paws. As the pain starts to kick in, the dogs will lick their paws and the hairs get trapped on their tongues - this very quickly can lead to gangrene and loss of the whole or part tongue. If untreated the dog can die. We have 3 dogs and this time of year I always carry water with me to flush out mouths and during procession time the dogs have to wear muzzles. They hate it but they get used to it.

It’s that time of year again. Unfortunately friends of ours have just lost a puppy to these dreadful little creatures. Please do look after your four legged friends around these horrid caterpillars