Questions about French showers and fittings

First off - we have a ‘hydro-massage’ type plastic pod mounted on the wall that I’d really like to remove and replace while causing the minimum amount of damage. I have no idea on make - it’s one of those designs with a shower head on a riser, plus a separate set of 8 horizontally firing nozzles, a single non-thermostatic mixer control and a knob to control where the water goes. I tried lifting it gently in case it was mounted on key-hole eyelets, but it didn’t want to budge. Copper pipes go straight in from underneath, with no obvious way to detatch. Any ideas how this kind of thing comes off the wall, short of attacking with something heavy and metallic (very tempting)?

Second question: I appreciate that while French standard sizes look sort-of similar to UK ones, they’re actually a little different. I’d like to use a UK-sourced thermostatic shower mixer - is this likely to be a straightforward fit or will it need some funky adapters making it more trouble than it’s worth?

I’d like to use a UK-sourced thermostatic shower mixer

I can recommend Grohe thermostatic shower bars - they are not horrendously expensive on Amazon.fr.

+1 for Grohe from me too.
The rental we had before building our bungalow had Grohe shower fitting… it was superb quality.

You can use a UK sourced thermostatic shower bar but not sure why as I used to buy french ones and take them to the UK where I installed them for customers. The mounting brackets angled or straight should be purchased in france so they fit french pipe sizes, the threaded parts are BSP so no issues there.
Bought el cheapos and still going the diffence is how bad the chromed plastic tap ends are. More money gets metal ends. The thermostatic cartridges are much of a muchness but spares for well known are easier to vome by but even then they change them every so often so you can end up buying new.

Thanks, but let’s just assume I won’t be buying a Grohe unit for now, not least because it’s going to be awkward for me to take delivery since we don’t live there.

Thanks Corona. By mounting brackets I presume you mean the fittings the copper pipe is connected to?

I’d planned to pick up a £60 unit from Screwfix (good reviews & rep). We’re still using our 10+YO Ebay cheapie and it still works well.

There’s a trust issue too. I’ve seen how poor the quality is of some of the (new) fittings in the bathrooms in our house, and I would prefer a source where cheap doesn’t mean automatic garbage. I’ve got a bunch of remedial work to do next visit because of really bad quality and poor execution.

Yes indeed, plenty of options for different mountings. A thin spanner is useful in some circumstances to get the fitting tight as some rotate as you try to tighten leaving the bar a little degree off level.

I bought a rack of the €14 brico depot ones back in the day. Mines still going and as it was rented I wasnt going to spend big.

Any thoughts on how to non-destructively remove a shower pod?

Can you find one similar for sale - you then may be able to look at the instructions.

how about some photos… ?? let’s see what you’re looking at.

Good call - I’ve spent 30min on google without success. Will see if I’ve a suitable photo later, but suspect not.

The picture quality is horrible, but here’s an image of the shower ‘pod’ from the side. 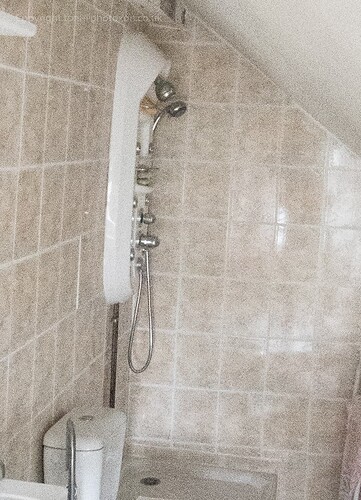 I would have thought that all the various outlets and control knobs would be removable, and fixed to the plastic enclosure with shielded nuts. Maybe then the plastic frontage would come off ? Either that, or there are hidden screws that fix the whole thing to the wall. Look carefully for those flush plastic screw covers that can be difficult to spot.

We’ll be back in a few weeks time to look again, but I did give it a reasonably careful once-over. There are no obvious covers over screw fixings. The jets for the massage aspect are set in wood-effect inserted panels that wouldn’t lever out using reasonable force.

I’m not sure that the jets are the problem. They will be connected to the main water block via small plastic silicone pipes and will come off with the unit. That’s if I’m interpreting the picture correctly.
The other option I’ve thought about is that the plastic panel may clip onto a unit that is screwed onto the wall. If this is the case, you’ll probably have to remove the control knobs and outlets as suggested before and then unclip the plastic front.
Edit: if you slide a thin metal shim behind the plastic fascia and move it around the edge, you may find clips.

Just to clarify, I don’t think the jets are a problem, but I’d wondered if I might access behind the panel through the opening for the jet mounting. When we get there in Sept I’ll try sliding a metal piece behind the fascia to locate clips.

From the photo, may I suggest the following possibility.
Could well be that the plastic ‘pod’ is held in place by hidden nuts located behind the control knobs and the fixed shower head at the top, plus the use of mastic around the joint between the pod and the tiling. If there is no mastic around the joint to the tiling, then in all probability the plastic cover is a snap-on fit to some sort of base plate.
The center plates of the control knobs (metal or plastic) are probably a push on fit, in which case they can be levered out by the simultaneous use of two very small screwdrivers positioned opposite each other. Removing the center plate will probably reveal a central screw or nut of some type, which when removed, will allow you to pull the knobs off the spindle. Often there is then a screw on shroud which can be removed (use mole grips or similar) to reveal the metal nut that is holding the pod in place.
Spraying the whole assembly with some proprietory decalcifying product, and allowing it time to work, will make the disassembly easier if it has been in place for a long time.
There may well be a similar process to follow for the fixed shower head, in that the parts will progressively unscrew until the all important retaining nut is revealed.
With the nuts removed, and the mastic cut through with a Stanley Knife or similar, possibly the whole unit, or more likely the cover, should then pull off the tap and shower head spindles towards you.
Once you have sight of the interior connections it should be fairly plain sailing to see what needs to be done to get the rest of the thing off the wall.
It’s a good idea to have a set of small Allen (Hex) keys to hand as sometimes there are small grub screws to be removed in order to get some of the parts off the tap spindles. The grub screws can be difficult to spot if they are all gummed up with calcium deposits.
BTW — Don’t forget to turn the water off before you start. Sounds obvious but I think we have all forgotten something basic like that from time to time. Myself included.

If the pod has been in place for a very long time, and a combination of decalcifier and WD40 doesn’t work, then it may well be that you will have to do some damage to the pod in order to remove it. At that stage a small angle grinder comes in very handy. Brutal, but effective.
It will also be a good idea to fit some isolating taps (at the earliest possible stage in your endeavours) to the water feed pipes if they are not already present and functioning. This will save having to have the entire water supply to the house turned off during the work.
I don’t wish to “teach Granny to suck eggs”, but having all the required bits and pieces to hand before you start may well prevent a lot of inconvenience.
Good luck, and please do let us all know how it pans out.

In some of these, the whole unit is mounted on a pair of hooks/screws, and you slide the unit directly up the wall to move it into a position where you can pull away from the wall. See, for example here and the downloadable “notice”

Thank you Robert, I really appreciate you taking the time to describe that for me. We’ll be back in another 5 weekss, and I’ll feed back after that how it was removed.

Thank you. I’d hoped it might be a case of sliding it up, and will also try that, along with Robert’s suggestions, when we’re there next. I did give it a ‘nudge’ upwards, but that may not have been enough.