Discussing Radon leakage… on a heating thread… got me wondering. This is an interesting link… and I will be asking questions at my Mairie…

Scroll down to the map, put in the name of your commune and see what level of “threat” there is in your neck of the woods…

We are category 3, not surprising - we have an abandoned uranium mine too.

Most of the long term residents here have 2 heads, extra toes etc

, but then it could be that everyone is married to their own cousins

Around here… I am certain they are…

… lovely folk, they do tend to be interconnected… cousins of cousins…

We too, are Cat 3, but not surprising given that this is the Auvergne, and mining for uranium was also allowed here in the past. Add to that the open cast rhyolite quarry up the road, and we’re well on the way to glowing in the dark…

When you bought your house one of the diagnostics should be for radon, so should be information somewhere in your file. I was reminded as we have just bought a 2m strip of boggy marsh at the bottom of our garden, totally useless except that it allow us to protect our pond fromthe neighbour’s cows. And radon was part of the acte de vente.

We are on granite here, so yes radon.
In fact our neighbours have just moved to a village without radon after having lived here for about twelve years.
We are on a sous-sol, so the effect is ameriolated.
We had the same in our Cotswold house, but one floor was on solid ground, so not so good.
The Rose Coast in Brittany is full of radon, in fact the hospital has one of the highest readings.

Shortly after Chernobyl I was listening to Farming Today and someone asked a question about what the radiation fallout in North Wales meant in layman’s terms. The answer was that the sheep had experienced radiation levels equivalent to those encountered by people who spent two weeks on holiday in Cornwall. Radon gas can be a real problem.

My house hasn’t been tested for Radon and neither was my previous one. Maybe it’s a new thing ?

We bought our flat in 2000, and it was mentioned then I recall along with lead and termites. And our house in 2010, and I have the papers for that purchase. Neither propertyt was tested specifically, but it detailed what level of risk there was. The land we’ve just bought only had radon, not surprising that wouldn’t bother with lead and termites in a boggy swamp!

Hi Stella, Radon was part of my report pack on the farm I’m buying in France. It’s in category 3 so high presence in the area, due to the granite sub terrain. Regular exposure to Radon gas over long periods is carcinogenic and can lead to lung cancer so it should be taken seriously. Radon gas can build up over time in confined spaces such as cellars and underneath suspended floors so where possible these need to be ventilated by installing air bricks. In an older house a simple case of opening the doors or windows or venting regularly so there is a change of air regularly is important. It’s a bigger problem in newer better sealed houses as the gas can build up overtime and not escape. Older houses are much less airtight than newer ones but gas traps can still occur. If people have real concerns you can buy radon monitors and alarms if you feel you are in a high risk area that will help you to monitor levels. You can buy them on amazon. 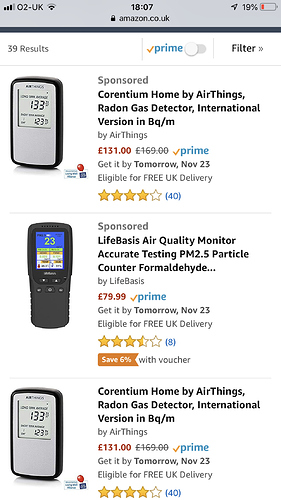 Here is my report from last week from the Notaire 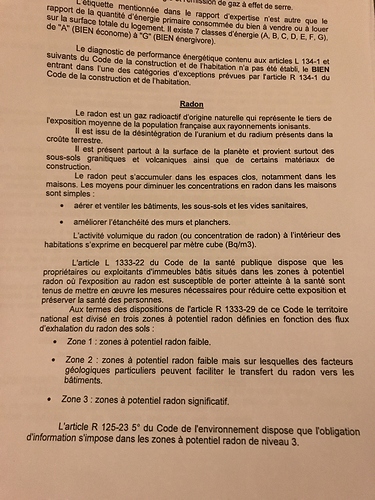 Nothing like that in my paperwork… which is in the filing cabinet behind me (even as I type)… I checked… and all that is talked about is lead, asbestos and woodworm… … in fact so much lead, that the Notaire wanted confirmation that we were happy to proceed with the purchase (I’d forgotten that)…it’s all there in the file…sewers or rather the lack of one… rights of way… but absolutely nothing about Radon or any other “possible nasty”… and as I have not heard it discussed in the past 20 years… I don’t think I’ll worry about it too much…

In depth surveys, with their results published/made available in 2003 are what current thinking/precautions are based on…

If you’re not in an area with the correct rock formations there would be no need to test for radon. One of the places it gets trapped is within the cavity of double glazing units. My sister and her husband built a house near Falmouth about 15 years ago and the Radion traps and preventative measures that thay had to include in the design were pretty impressive.

Yes the notaire was s scream last week a real comedian! He said the lead paint in our house was no problem as long as we don’t lick the walls! He said the electric were to quote him “f***ed, and we need to replace them all. And as for the radon gas he said well your house is not exactly air tight is it pointing to the holes in the roof so I don’t think radon gas is going to be an issue for you!

He then proceeded to tell the elderly vendor that the mad Englishmen were still happy to buy the property even with the new high speed train line going through property sending her into a blind panic of apology for not knowing he kept this up for 5 minutes with her before saying he was just teasing! She nearly had a heart attack bless her!

a treasure… .useful for you to have his card for any future stuff…