Scene of the crime..it wasn’t Colonel Mustard, but who?

A very neat and tidy crime scene this morning, not much left for forensics.

But who was killed and by whom?

We have a horrible feeling it must have been an owl caught on the wing by a raptor? But just feathers left…? Cats usually leave more of a mess. Any thoughts? 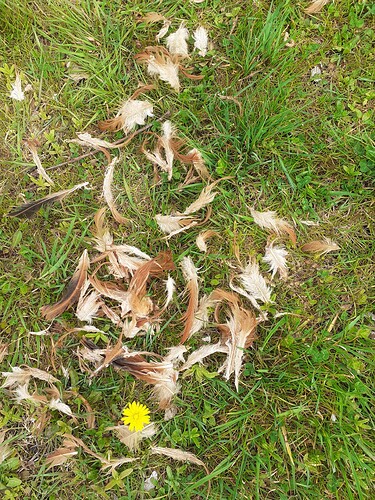 Probably right that it was caught by a raptor since they usually and efficiently pluck their prey (my cat doesn’t). Perhaps it was disturbed in this and took the prey somewhere quieter?

Perhaps a scrap between two Owls over territory ?

That’s a nicer thing to think it was….murder on my back step is not very cheerful.

Well I know that the Owls are calling vociferously and continuously during the night hours as they set out their territories here at present.
We have a pair of Little Owls who seem to have taken over the old Jackdaws nest inside the top of the gable end of our barn, which is something that the Jackdaws are not favourably impressed by. So it is often quite noisy with various protagonistic birds here at the moment.

Fox? Quite a big bird?

I think its the battle site of two owls, An enlarged photo of the feathers shows they are cleanly nipped off

Thank you for that. It has made me happy to think it was ABH not murder…

if they are cut then something with a beak.

I suspect a platypus

They don’t have a beak

It was a wombat with a pair of scissors