Should politics be an interegal part of an artists pallette?

I have tried to keep politics out of my Art for so long but I feel so strongly that America is being killed by the foreign private banking interests that are supposedly in control of the Fed and the European central banking system. And it seems like Congress, The President and the Supreme Court are powerless to stop it and are in fact a part of the whole thing. So I am putting the finishing touches on the following piece I call "Dying Alone". This is a third in a series but am afraid to publicize for fear of backlash, losing students etc... lol 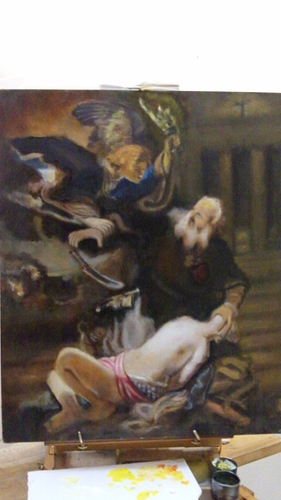 Hey Jo, Thanks for the reply. Yes, I agree that things have deteriorated badly but also I believe we are on the dawn of a new age. I believe this is the beginning of a new Renaissance. The Internet is the printing press of today. Literacy was the engine that fueled of our rise out of the Dark Ages to the Modern World. And just as the Renaissance was met with the Inquisition we are seeing a similar reaction today to the emergence of a new Digital or info merchant class. The Drudge Report is out performing every ancient news outlet that spins the propaganda we are all inundated with. People talk about the New World Order and the Illuminati which I think is a bunch of crap. It's the same old stinky families, same old fear mongers, same old garbage that has been used to control civilization for centuries. Fear is always used as a tool to disconnect people with the magic of life. And I really believe the answer to fear is beauty. That is why I think I am propelled to paint what I paint. You want to help me market my work. Great! Let's talk. Thanks again Jo. a bientot.

I'm gobsmacked. It's now a crime to use the French flag to criticise the government?

This news makes me reconsider my application for french dual nationality.

I also conclude then, even more than I previously had, that as people, not just as artists, it's our duty to make political statements as often as possible, whether it risks imprisonment or deportation or not (which was the fate of the guy who refused to shake hands with President Sarkastic , was it not?) I'm firmly with both him and Ai Wei Wei.

Poverty and extreme nationalism or extreme communism or extremism of all sorts and the links between degradation of human rights and the gap between the rich and poor are real and present in every aspect of human life.

Things have deteriorated badly recently despite huge moves forwards, and historically always do in a recession. I also believe the people who control banks create recessions on purpose in order to stimulate the arms trade and the general description of "economic growth" which is an entirely twisted concept and is nothing to do with progress.

There's nothing like a good few conflicts to confuse everyone and continue to create money where it doesnt exist.

I'd like to help you publicise your work if you decide to go for it.

The French and American relationship is one of the most fasinateing alliances ever in world to me. In 1799 there were only three Republics on Earth; France, the United States and Haiti. Forgive the following risque imagery Carolyn. I know we just met:-D But I feel really strongly about this and I think this is going to be the subject of my next painting. We as Americans being isolated from Europe seem to believe that America, France and Haiti took a bottle of Liberty creme had a menage a trois and gave the world a Freedom facial!!! lol... (again, sorry) But this is just not the case. Belgium, Denmark, Luxembourg, Netherlands, Norway, Spain, Sweden and the United Kingdom to this day are Monarchies. They say that these Monarchies are ceremonial and have no power but the world is beginging to awaken to the fact that Republics like even the US are influenced and some say even controlled by Old World powerful families that have ruled Europe for centuries through the Western Central Banking System. Even at this moment we can see they have hijacked the governments of Greece and Italy. Both have former bankster elite in charge now. France is the only country that cut off the heads of the evil bankers and Aristocrates by the thousands that were stealing from them in the Reign of Terror. Today the Internet is the Renaissance part Deux! The Inquisition of the Catholic Church has been replaced with the War On Terror. The French are sometimes slow to catch up to speed on things. But once they do it could get really interseting!!! :-D

On a more mundane level, I've seen shower curtains with the Statue of Liberty on, a whole section in Castorama's brochure on paints, wall coverings and furnture, pictures with yellow cabs and waste bines that look like fire hydrants all to make your French home look like an American one. Nothing to do with politics but the French are also hooked on Betty Boop and Marilyn Monroe plus anything to do with London and the Union Jack flag/symbol. The British and the French have a long, close political and cultural history as we have with the Americans but this hasn't stopped any of us expressing our feelings in any of the arts.

Wow! Even if there are French who are fascinated with what's going on in American politics and not really against it because it's America and there are some French who actually like things that are American? Having rarely met a French person up close (unfortunately) I never had the chance to get into a cultural discussion about it though I've wanted to for many years. I've merely read books about other Americans, including those who were lucky enough to qualify for intermarriage with French nationals, who express how intellectually enriching it is to encounter French open-minded views, even if there's somewhat of a political disagreement. I was told some time ago that political disagreements don't necessarily prevent or ruin French-American friendships or even dating situations. I tend to think political disagreements take a toll on all-American social affairs more than with French people who associate with Americans as friends or more. Most of us are aware of the many cultural differences, but the subject of politics doesn't strike me as being taboo for the French, and certainly not for every French person in his or her personal life. I have books about it. For me the most beautiful example of a French person to meet and talk to would be someone who's fond of American history and has an appreciation for France's contributions to the U.S. as a nation!! For a while I've been fantasizing about having that exact type of (no-nonsense) French friendship and often even more than just friendship. Most of all, I hope to someday be able to do what it takes to get in the position to be connected with France professionally and make (or at least find a way to be allowed to make) artistic acheivements as an American patriot/Francophile. With all this in mind, should I avoid political subject matter in my art, then? Maybe just keep it in the context of a historically-inspired approach?

Hi Carolyn! Good question and YES you have the answer. lol... They would for the most part criticize it even if the painting is relatively good!!! Trust me I know from experience :-) Totally confusing. Then I I read this book that asserted the theory that the French are the 'Aborigine's' of Europe. (Don't tell them that!!) Never exterminated, or dominated and replaced'by another culture they survived in tact with an art history that goes straight back to cave paintings from the paleolithic period 30,000 years. ago What we see as French attitude and snobbishness just may be an ancient defense mechanism designed to drive every foreign invader absolutely insane!!! lol... And yes, Ron Paul or no vote at all!!!

Hi Guillaume. I'm American still in the States and I recently saw online an amazingly good realism painting of Republican presidential candidate Ron Paul depicted as a patriot soldier in a battle of the American Revolution. It has inspired me to use similiar-themed paintings as I have a fine art painting hobby at home. I took to wondering how the French would view this as an artistic subject, such as Tea Party art. I'm wondering if (hopefully) there are French people who happen to admire American culture to the degree where they would probably see the Tea Party movement as a cultural/political curiosity. Or would they for the most part criticize it even if the painting is relatively good?

There is a lot of it about but not in the mainsteam except for graphiti. A lot of comic book art makes political points but again, to a narrow segment of society. You have the freedom to express yourself and your feelings through your art so go for it!

Thanks for your thoughtful response Jeanette! Yes I agree, the subject one chooses really is a personal choice one must make. And dealing with any backlash is definitely something one must consider. But it's funny, how Paris can mess with your mind as an artist. lol...

I was rejected by a Gallery because I dared to paint a portrait of Sarkozy. The curator winced as she came across the portrait and promptly closed the portfolio, gave it back to me and told me to return next year. And quite frankly, that really ticked me off.lol. So I did an entire series of Sarko and Carla with the full intent of returning with my new work. This is the result.
http://youtu.be/J-uDE3NJhTc

Then I found a gallery that liked the Sarko series because he saw it as ridicule. I included my other works which were classic images of Paris. And at the opening I could hear the French mocking me. "Ah zee Amereehcan in Pariee...ha, ha, ha,"

That ticked me off again

So I came up with this which I put anonymously on ebay.

This one is called "JFK, Thermite and the Controlled Demolition of the Federal Reserve"
http://youtu.be/N6VBTSzRo8Q

But you are right, Jeanette. Ultimately, It is the call of the artist but sometimes, although I agree an artist should feel "free, to make and/or offer *whatever they wish*, as their art." sometimes I feel imprisoned by my passions or insanity, which are especially intensely felt while living in Paris!!! lol..

Wow Guernica up close and personal! that must have been awesome...At the Picasso museum I was blown away by the shear volume of Picasso's work but knowing 'Guernica' i thought he would have more works in that vein inspired by politics but I didn't see any. My vocabulary in Modern Art is limited so I probably don't know what I'm talking about but to there just seems to be a lack of any real political introspection in Art these days. Maybe it's just me... :-)

Always has been I think, Picasso's Guernica springs to mind. Interesting, but at the Museo Reina Sofia, Madrid where it hangs, you are allowed to photograph all the other paintings in the gallery except this one. I asn't prepared for the large size and how grey it is.