Not really my thing, I first heard of it a couple of years ago when a Norwegian TV channel showed live coverage of a log fire burning, all night. Apparently It went viral, as they say. I didn’t see it but I did watch another one set in Lappland, following the reindeer in their annual migration.
Closer to home, Radio 4 on Sunday mornings has a short ‘slow radio’ section in the Broadcasting House magazine programme.

As I said, not really my thing, but in the last few days in trying to capture video of ‘my’ Couleuvre in the swimming pond, partly that and trying to escape from our planet’s obvious spinning out of control towards the sun, I set myself up with chair (already there) camera, tripod, Kindle, bifocal specs (in order to see across the pond and also the aiming screen as well ) and a cool drink, to await the the visit.

Now, if you have seen my friend’s video in the Wildlife in the Garden thread you will know that it is only one and a half minutes long. I sat there, perfectly relaxed and cool for the best part of 2 hours to get that action, but every now and then glanced up from my reading to watch something completely different. The otherwise placid pond’s surface is never really still. I became fascinated by the constant movement. Are these circles caused by minute partlcles falling, insects doing the same or something from the deep? Certainly a few are newts grabbing a quick air gulp, but not all

So here is the result. My title an homage to one of my favourite TV comedies, currently re-run on BBC 4, Ever Decreasing Circles.

Once again, full screen is best.

Flies /wasps touching down for a drink Get closer

Gas released from vegetation on the bottom?

Both good ideas, but I am already within a metre or so of the nearest part of the surface. and I think insects as large as wasps would have been plainly visible. Gas yes, perhaps. Little islands of muddy leaves float to the surface from time to time which I remove, along with leaves, with the net.

Last summer, when I began to renovate the pond and recommence daily swimming, I spent weeks dredging the bottom. When I swim I never touch the bottom, or more precisely never touch anything other than the liner. This is because both ends slope quite steeply (though I can stand unaided at the entry end exit end (to the right of the camera)) and have no detritus on them. I am still trying to make up my mind whether to dredge again this winter, I suppose I must but am bothered by the disturbance to the wildlife down there.

As mentioned elsewhere, I filter everything that is caught in my net from the surface sweeps, and throw back all the wildlife that should be in the pond. This has gone through phases, tiny newtlets, tiny tadpoles, very large tadpoles (still even now occasionally), beetles, and in this last day or so several long (2 inch) black beetle like creatures that I am wondering might be dragonfly larvae. All go back. Many adult newts, the occasional frog (haven’t seen one this year yet) and of course the 3 legged toad. The only animal which was happy to be in my company and allowed me to touch him. Finally, and the point of the latest camera mania, the snakes.

Gas or no gas, I am convinced that if I continue to wear the goggles that cover my nose and keep my mouth shut (I only breathe at the turnarounds) I will be ok healthwise, even though the water is opaque beyond less than a foot of depth.

Yesterday I was visited by a large pigeon which landed on the opposite bank and then tiptoed down to drink. Later he settled on a branch cooing and shortly after, in a thick part of the bush where I couldn’t see, there was a helluva dustup going on after 2 more joined the party. And the day before, on emerging from my swim and running my hand through my hair, I came up with what I thought at first was a pine cone, but turned out to be what I now think was a female stag beetle, the 2nd in as many days. Are they supposed to be in the pond? I laid her nearby in the vegetation.

I shall download your video, enhance a few relevant frames, slow it right down, and see what is or is not there. Will report back.

Enhancing the whole video will take 4 hours, but why not… what the hell…I like detective work…

That sounds interesting, looking forward to it.

Managed to pick this out of yesterday’s video. About 4cms long. Dragonfly larvae? Anyone? 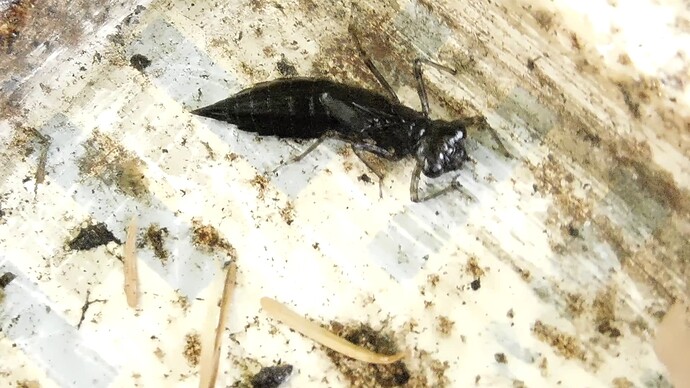 looking forward to i

Blimey, sounds like the book I’ve been reading up at the pond, Ken Follett’s ‘The Third Twin’.

BTW, the fearsome monster above is Dragonfly larvae, better keep on looking after them.

Each frame of the video has been enhanced & darkened, I’ve watched the video at high speed and in slo-mo, and I cannot see any evidence of flies dipping down, vertically falling debris/seeds or any other UFOs - might be invisible fairies of course. Have re-uploaded to YouTube in 4K HD, slowed down by 25%, and without audio.

54 seconds into the video, just to the right of the grey triangulated watermark in the centre of the screen, watch for a surface disruption & radiating ripples, and then the appearance of what seems to me to be a bubble, which floats to the right for a moment, then disappears/bursts and creates a few extra supplementary ripples, which I can also see in the original video.

Easier to see using my software where I can move consecutive frames back & forth.

As forensic as I can get, as a non-scientist - methane bubble appearances and bubble bursts? 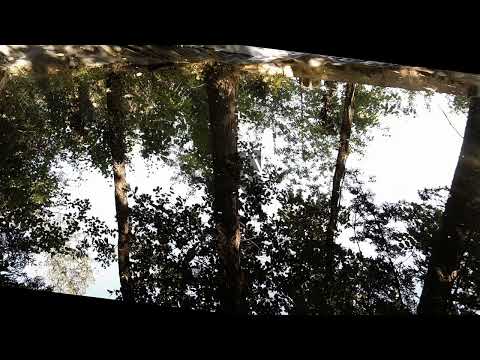 The link didn’t work for me last night, but it does now and quite frankly I can’t see much difference, maybe it is my old eyes.

But I agree that the most likely cause is decaying matter on the bottom. Still nice and peaceful to watch in the cool though, whatever the reason.

Still don’t know what to do about it after the autumn fall, I am loathe to disturb vital habitat especially in view of my definite identification of the dragonfly larvae, which are numerous at the moment in the surface net. Perhaps they are ready to emerge, climb up the nearest grass stems and become the beautiful flying wonders that we see in the summer.

So, I think dredge is the answer, after all, doing that last year hasn’t held back all the wildlife this year, has it?