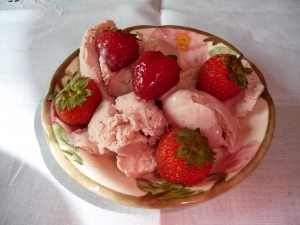 In short, this is heavenly. If you don't like the idea of rosewater,
just leave it out. For vanilla ice cream, follow the custard making
process in the recipe and freeze that alone.

Strawberries and cream are the quintessential British dessert, and I
have combined those evocative flavours of summer with one of my
favourite ingredients – Rosewater.

As an unashamed collector of kitchen gadgetry, I do own an ice cream maker (the one with the inbuilt chiller unit).

However the recipe can be made using a domestic freezer, with a bit of patience.

1. Hull and cut up the strawberries into quarters. Lay on a plate and
sprinkle with the rosewater.Leave to infuse for at least one hour at
room temperature. Stir occasionally to amalgamate the rosewater
thoroughly.

2. In the meantime prepare the custard. Add vanilla sugar, cornflour and egg yolks to a deep bowl. Beat until mixed well.

(I use cornflour to minimise the risk of splitting the custard – other
methods include the use of a double boiler, or having a sink full of
cold water nearby to plunge the mixture into in the event of disaster –
Cornflour is the simplest way. Honestly.)

3. Slowly heat up the cream and milk in a saucepan until it is
considering its ascent up the pan sides to come to a full boil. BEFORE
this happens, take the pan off the heat and pour into the egg and sugar
mixture. Beat the mixture hard.

4. In a clean saucepan, return the mixture to the heat and gently heat
and stir (or beat) until the mixture thickens. Remember here that we
are not looking to cut it into polenta like slabs – a gentle thickening
to a pouring consistency is sufficient.

5. Cool the mixture down. Do this by way of some ice in a large bowl
placed below the pan, but NEVER in the fridge – this will seriously
affect the operating temperature and the other food stored there.

6. After the strawberries have macerated, purée them in a blender.

7. To make the ice cream either pour into the ice cream maker and set
to churn and freeze, OR pour the mixture into a plastic lidded
container and place in the freezer. In this case, the mixture will need
to be broken up and mixed a few times during the freezing process in
order to reduce the formation of ice crystals in the preparation.

8. Serve with a few additional strawberries, in cones or wafers or
simply on its own. An ice cream maker has the added advantage of
allowing you to serve it “semifreddo” – a soft creamy consistency that
is a stage between the liquid mixture and the fully frozen result.