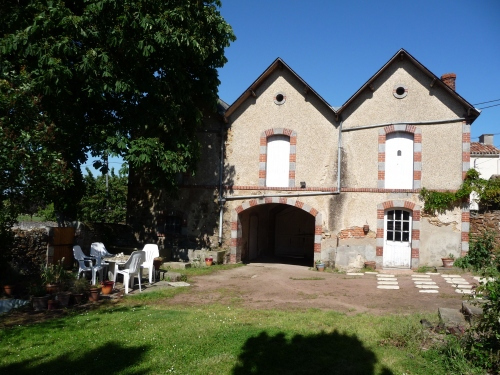 Through fear of stating the obvious, its so hot!
I know our weather men take mean temperatures with little instruments


in the middle of remote fields, but my faithful old thermometer outside


the door says it’s 35 degrees. I follow the line of logic here that it


may not meet Met Office or France Meteo benchmarks, but it stands to


reason that if I go and sit in my garden, I won’t need a jumper or a


We have been living in our current home for almost three years now, and


I love it here. We lived in the same village and a friend suggested we


come visit our current home when it went up for sale.


We weren’t even looking to move at that time, and I couldn’t really see


the point. However, she was quite insistent so off we went.


Many say that you should never buy a house just on the strength of the garden alone. I admit I did.


mature trees and shrubs. It has a delightful kitsch pond with a swan


fountain, huge granite slabs for seats around a stone table, a lavoir that I intend to fill with water lilies when I get a free moment, and many other delights dotted here and there.


My husband was a little unsure as being a sun worshipper, he was


habitual lolling on his steamer chair on lazy summer afternoons.


What to do? I came up with the following solution.


campaign entitled “Sun Watch”. They were told to go every two hours


and gauge where the sun was hitting the garden. As you might


appreciate, it was not the most popular of initiatives, especially as


Holly, the eldest was writing her dissertation at the time.


However, we soon realised that the sun was on the main garden for more


than enough of the day, and also discovered that the garden behind the


house was bathed in sunlight from sun up to sun down.


As a bonus for me, as I spend my time hiding from the sun, there was


ample space to sit under trees and enjoy dappled sunlight and shade.


The deal was struck and we moved in the July of that year.


We are very happy, even on the wet and rainy days.

Footnote: Although not entirely connected with the tale above I


would mention a few points about the delightful man selling the house.


town. Once we had shaken hands on the purchase (long before we ever got


to the notaire’s office) he handed me the keys to the house.


He was using the garden for an early crop of potatoes, and as soon as


they were risen, he cleared the plot and insisted that I plant up my


vegetables so I would not miss out. Likewise he allowed me to plant up


the old stone planters around the house.


Finally, he suggested that my daughter’s piano be moved in straight


away as it was in storage and not easily accessible. So a music room


was made available complete with free heat and light.


On our moving day, I was touched to see that he had left the majority of his potato crop for us all to enjoy.


I wonder if I might have experienced the same thing in the UK?