I just realised that on Sundays (like last week) where it is nice and warm but not too hot, not raining etc there were only a few users online. Today with it being grossly hot there are a lot more of us escaping from the heat! I’m waiting for the shade to come over the terrace so I can go and jet wash it!

I was outside at lunchtime enjoying the weather, and probably too many

too early in the day, but then remembered the footie is on, so fell asleep for the first half…

I took your advice to look outside.
Enjoying the warmth, I heard a noise and looked up to see the Patrouille de France in a formation of 8, flying directly over my house at a height of about 500m. Their precision was a match for the Red Arrows - and nearly as good as the Barn Swallows!

Was out early tackling the remainder of the untamed jungle we call our back garden before the heat hit. Actually watched the football this afternoon inside with shutters drawn, about to start the barbie!

Far more modestly than much of the above, a simple (10 km return walk along the south bank of the Lot in the shade of the forest, a mid-morning demi under the vines of the unmodernised (unspoilt) Auberge du Pont at St Martin de Bouillac then walked back again. The walk is flat all the way and hope if I continue doing it a couple of times a week (in addition to the ‘proper walks’) I’ll still be able to do it when I’m in my eighties

Far more modestly than much of the above, a simple (10 km return walk along the south bank of the Lot in the shade of the forest, a mid-morning demi under the vines of the unmodernised (unspoilt) Auberge du Pont at St Martin de Bouillac then walked back again. The walk is flat all the way and hope if I continue doing it a couple of times a week (in addition to the ‘proper walks’) I’ll still be able to do it when I’m in my eighties

Similar for me, apart from the 10kms of course, it is amazing how pleasant it is in such heat under the shade of trees and I love my morning walks with Jules in the adjoining forest. I pass my wild pond, also shaded under the trees, on the way out and back and, after a swift tour round the garden with the poo bucket, am straight in it for a few lengths. Before I broke the surface and disturbed the peace of the residents though I spent some time admiring the bright green newt bathing in a small pool of sunlight just below the surface. Sadly he/she and all the other inhabitants don’t hang around once the (to them) whale arrives so I don’t get to stroke any of them.

I suppose they are at least spared the trauma of a big splash though. Because it is uneven and rocky under the liner it is too dangerous to jump or dive in and so my entry and exit is via a rope ladder, the rungs of which are used by my hands rather than feet as I abseil horizontally up and down.

It is ideal in this heat, the water temperature varies only between 18 and 21 C night and day. Lovely.

OhI’m very jealous - that sounds lovely! Is it a normal pond or a proper natural swimming pool?

Pictures or it didn’t happen

We have the French Army from Dijon doing their training runs over our house.
Not quite so spectacular, but a reminder of where our taxes are going.

OhI’m very jealous - that sounds lovely! Is it a normal pond or a proper natural swimming pool?

Not sure what is the difference, Tory, I dug it out with my mini-digger 20 or so years ago, at the high point of the garden just inside the gate to the forest. Filled the bottom with fine sand then covered it with carpet underlay before laying a thick rubber liner on it. It is 7 metres by 3 metres roughly and about 1.5 metres deep.

Originally it was the largest of 3 ponds at descending levels and I made a seating/dining area over the top of the small stream that connected them all. A pump in the bottom pond sent the water back up to the top which gradually overflowed into the channel. Thus in those days it was filtered but not chemicalised.

For a variety of reasons, guests needed to make frequent trips to the toilet because of the sound of the running water underneath them being one

, I ceased the pumping some years ago and stopped the filtration.

So it is now entirely natural although I do use a net on a long pole to dredge the dead leaves up from the bottom frequently but that is not a straightforward task as the bottom and sides are uneven, just like natural rock albeit covered by the liner.

This morning after my first swim I did some dredging and later, although I am careful to inspect each net full for wildlife, I spotted a green newt walking along the ground towards it. He must have skipped out of the wheelbarrow that I cart the detritus away in and, although he was going in the right direction, was facing a real obstacle course to climb up over the rocks to the pond, so I gently picked him up between thumb and forefinger and deposited him just above the waterline.

@Griffin36 I did a short video yesterday while I was sitting relaxing after a swim, it was just for my own collection but I’ll put it on You Tube with a link later on.

A pond is what you have described. I guess a ‘natural swimming pool’ could be described as a posh pond! they basically have a shallow area (30cm) equal to the surface area of the swimming area, often all the way around but can be at one end. This filtration area is full of special aquatic plants that are good at filtering. There is then an aeration pump and in some (I would) a small UV pump as well.

Oh yes, definitely not posh, but suits me fine.

It’s quite some time since I last uploaded a video to my You Tube channel but things certainly have changed.
I tried to upload an 8 minute video today via my usual editor program. It chugged away for some time before informing me that it couldn’t upload to YT, but with no explanation or opinion as to why. I tried to upload it myself directly and just now, after no less than 4 hours announced that there was another 2 and half hours to go.

So no video, but I will pick out a couple of snapshots of the pond and post them instead.

Here’s mine, haven’t had a swim in them this year yet though, never seem to find the time now. 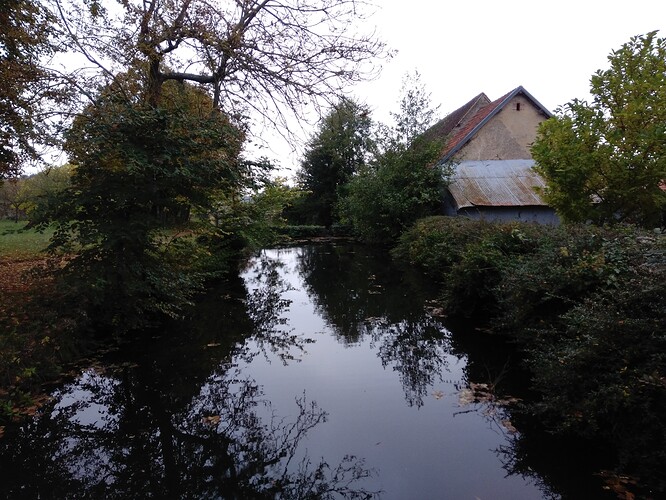 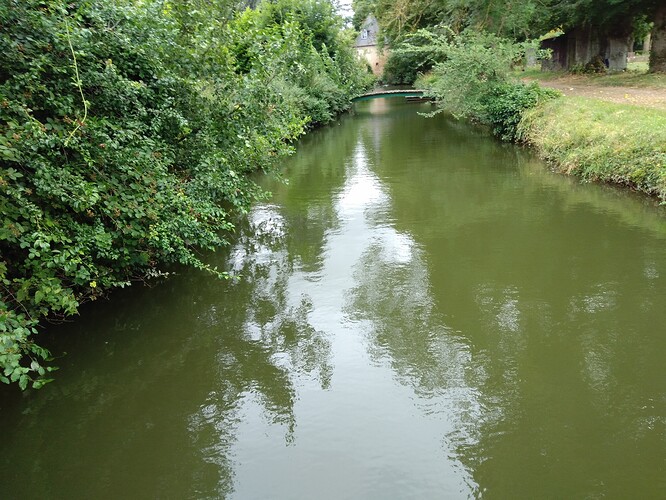 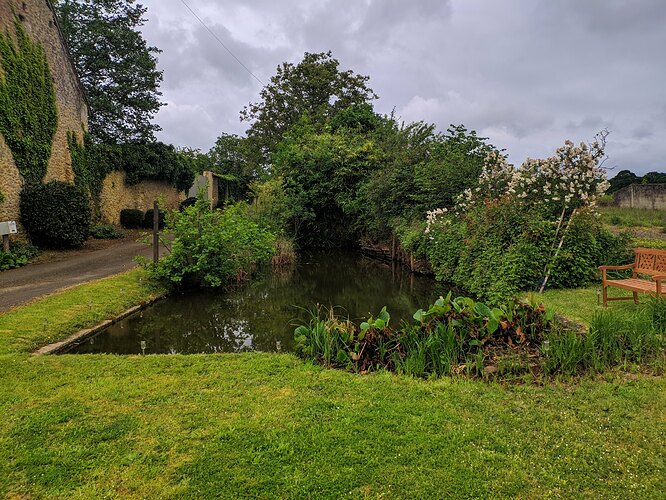 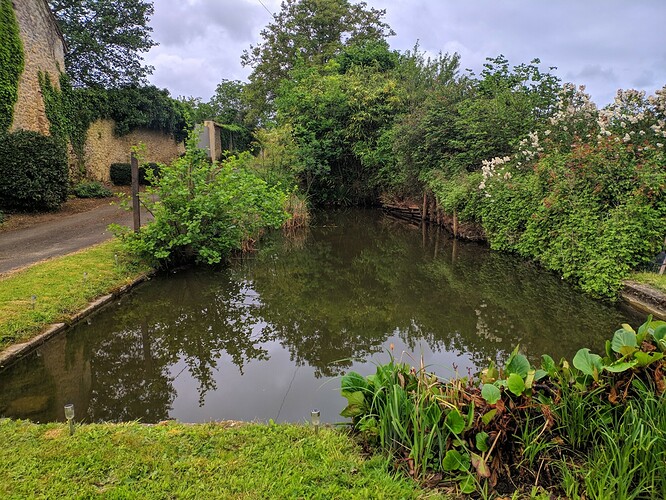 I just want anything to have a swim in!!! Only 18 days until our village pool opens!

@Griffin36 Very nice, mine isn’t anywhere near as nice looking as that but as it is surrounded by forest for no-one to see and me the only user, it does what it says on the tin, it’s a pond and can be swum in.

Must admit it would be nice if the bare liner was not so evident and with the bottom pond, which is in plain sight but not swimmable, I did manage to encourage plants and mosses down to the water’s edge. But that was at some cost in netting interlaced with compost and in amongst those there are some things I would prefer not to come into contact with.

There some places I think at the edges which ledge just below the surface, so that might be a possibilty, but not sure what to use or how to do it. 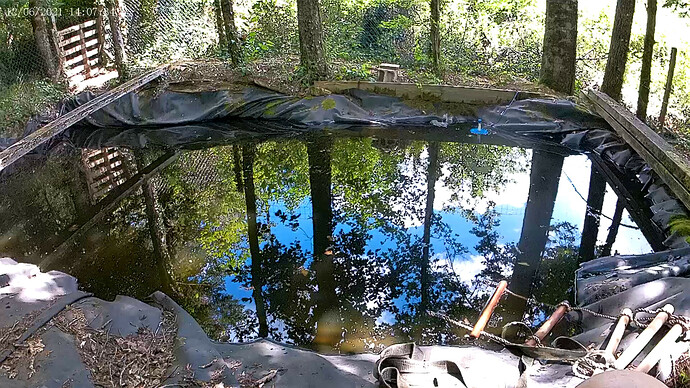 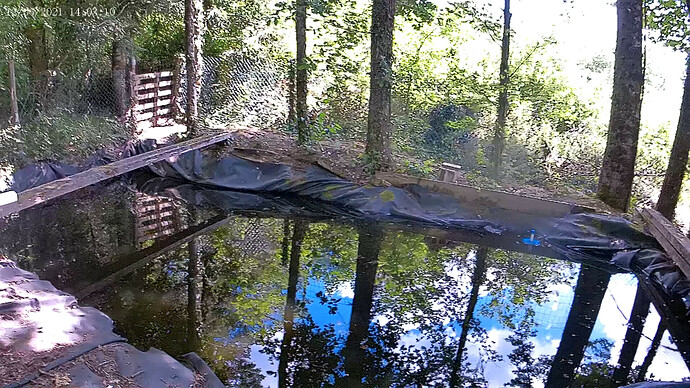 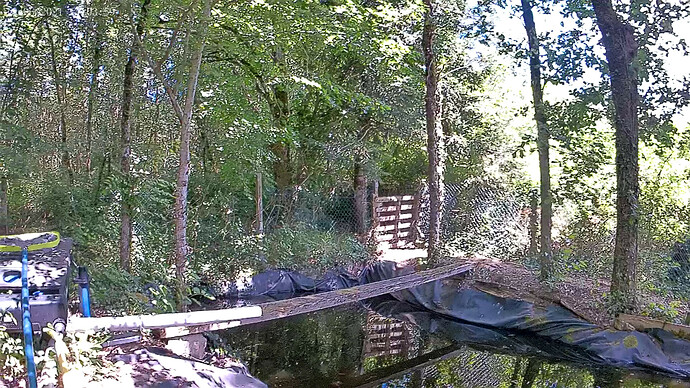