The Ukraine situation, where will it end?

Hard to believe really. How has it come to this?

Here is a summary of the latest developments:

Still defending Putin John or do you now realise that he is impossible to reason with?

Ahhh, I didn’t spot you there in the long grass Tim

Why do you misrepresent my comments? It’s not the first time you’ve done so. I never defended Putin, I denounced him as much as anyone. However, I also recognise that the US has caused misery and mayhem for millions over the last fifty years. I recognise that not so long ago the US has lied and manufactured “evidence” in order to go to war. So I am rather sceptical of US propaganda, this scepticism is reenforced when a man the World knows to be a liar parrots the same message.

You see Tim, thing aren’t black and white, it’s not good guy vs bad guy. It’s all rather grey and hard to make sense of.

Looks like US propaganda, and the little dog in the UK is following along.

I do hope that’s all it is.

I’m still wondering what all this taking place in a far Continent has got to do with Biden.

There’s been no report of any country in Europe asking the US to help.

So what in h*** is Biden doing making any comment in this that doesn’t concern him?

You have suggested that Russia should be able to use the Ukraine as a ‘buffer zone’ yet they are an independent sovereign country, what about their rights? The stationing of 150K troops on the Ukraine border is a massive provocation and if Europe doesn’t stand firm against Putin now he’ll know no one will stop him.

I tried to say that about PA’s situation and you shot me down yet with a nutter like Putin you think he has a point over Russia’s national security.

Finland is a buffer zone, why not Ukraine? You don’t think the expansion of NATO since 1997 was a provocation? Caste the scales from thine eyes Tim

BTW, none of this is defending Putin, is it?

We is where we is I suppose, we’ll need a Barbara Tuchman to explain this to us in due course.

What’s “PA”? And I think we should avoid terms like “shot me down” for the immediate future.

NATO’s expansion was done by 2004 nearly 20 years ago, why is Putin kicking off now given that he first came to power in 1999?

I just wish I could understand what’s being said on the other side. While I’ve little confidence in what’s being coming out of the US and Number 10, what Zelenskiy is saying worries me.

Unless Putin is planning a “surprise" attack then the attached is slightly encouraging… I see neither the US nor Bojo is being invited to the “meeting”. That may well be a good thing

Vladimir Putin and Emmanuel Macron have agreed to try to secure a ceasefire in the Donbas in Eastern Ukraine, and to put together an urgent summit at the highest level on the future of Ukraine, the Elysee Palace said in a statement.

The two leaders spoke on the phone for 105 minutes, and the outcome, broadly confirmed by the Kremlin, suggests Russia is for the moment to willing to step back from the brink of an full invasion of Ukraine to allow renewed diplomatic discussions.

The French foreign minister, Jean Yves Le Drian, will meet with his Russian counterpart Sergei Lavrov in the coming days to work on a possible summit at the highest level with Russia, Ukraine and allies.

The Kremlin suggested the meeting would be held in the Normandy format meaning the participants will be Russia, Ukraine, France and Germany.

It is too early to say if Macron has pulled off a last minute diplomatic coup, or if he has the full support for his initiative from Washington and London. So far most of his moves have been coordinated with the White House.

It was also decided that a meeting of the trilateral contact group would be held “in the next few hours” in order to “obtain a commitment from all the stakeholders” to ceasefire on the line of contact.

The purpose of the leaders’ summit if the conditions are met, would be to define a new order of peace and security in Europe,” the French Presidency said.

The Kremlin said Putin had expressed serious concern over the sharp deterioration of the situation on the line of contact in the Donbas.

Taking into account the acuteness of the current state of affairs, the presidents considered it expedient to intensify the search for solutions through diplomatic means through the foreign ministries and political advisers to the leaders of the countries participating in the Normandy format. These contacts are designed to help restore the ceasefire and ensure progress in resolving the conflict around Donbas.

The Kremlin insisted Putin was not withdrawing any of his wider demands saying Putin “reiterated the need for the United States and Nato to take Russian demands for security guarantees seriously and respond to them concretely and to the point”.

The statement added that the escalation in the Donbas was blamed by Putin on the provocations of the Ukrainian security forces, and he complained of the continuing pumping by the Nato countries of Ukraine of modern weapons and ammunition, which is pushing Kiev towards a military solution to the so-called Donbas problem”.

Yes, they asked Vyacheslav Nikonov “why now?” on the W@1 but of course he didn’t answer, nor would one expect him to. What made Putin think it was time to take back Crimea? I’m sure there are factors behind the timeline but they are a mystery to me and also, it would appear to the US. The removal of those factors would obviously be the best route to deescalation.

I see Manu has been talking to Putin again this afternoon hopefully with the backing of at least the EU if not NATO.

My thinking is that this is sabre rattling to see how far he can push things but even if he pulls back this is how life will be now in that area of the world.

As for Biden and Johnson their aggressive tone helps no one and is done to deflect the mess they’re both in at home.

Johnsons “get out of jail free card” beacause if the balloon goes up a few Downing street parties will be the last thing the media will bother about.

This would be the USA that bombed the Chinese embassy in Belgrade during Operation Noble Anvil in 1997 because they used out of date maps to program the GPS guidance systems in the weapons used?

I wouldn’t trust them to pour water out of a Wellington boot if the instructions of how to do so were embossed in the heels of said boots.

That’s only because they would have to turn the boot upsidedown to read the instructions.

Well the nutter hàs started sending the troops in

They are just there on military exercises and we have no intention of invading, my arse 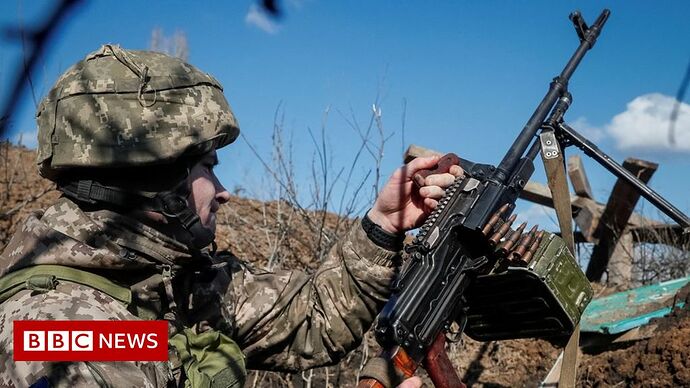 The move raises fears that Russian troops could be sent into Donetsk and Luhansk in eastern Ukraine.

I like his re-writing of Ukrainian history, to claim it has never really been a state

The time has come" the Walrus said,
"To talk of many things
Of shoes and ships and sealing wax
Of cabbages and kings…

Hasn’t he rather shot himself in the foot there? Not that it matters because he is probably not the full quid. But how can he recognise 2 small enclaves as independent states while denying that the much larger established Ukrainian state does not exist?

On the other hand, if there is indeed a large proportion of the populations of those 2 enclaves who speak Russian and consider themselves Russian, doesn’t that put them in some ways in a similar boat to other regions which would/might rather be independent, like Catalonia and Scotland for example, and thus could legitimately have their positions clarified by a free and fair referendum?

Just a thought, but if so and if it could be organised and overseen independently (very difficult if not impossible I know) would not that be one way out of this crisis?

Of course, they may just be an excuse in the mind of Putin, but personally I have never understood what advantage Russia could have in a bloody absorbing of an unwilling population into its own, already diverse, one.

But how can he recognise 2 small enclaves as independent states while denying that the much larger established Ukrainian state does not exist?

It is just sophistry, recognise them then send in the troops to help them defend their right to self determination in the face of Ukrainian intransigence. A well-worn transparent excuse.

I suppose its a bit late to send in UN peacekeepers.