Try your hand at navigating the Suez canal

Left hand down a bit, as Sub Lieutenant Phillips used to say. 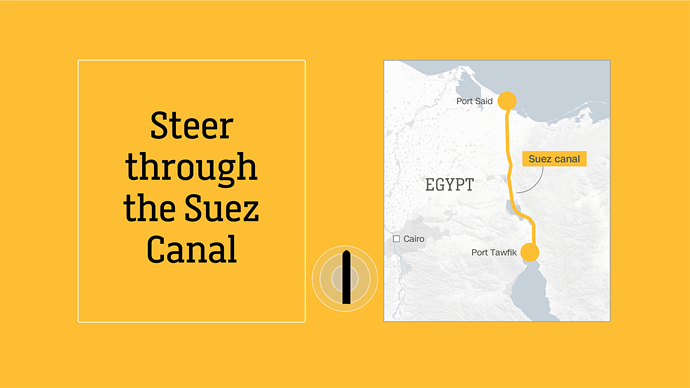 Steer through the Suez Canal

Navigating the Suez Canal is a high-stress, complicated feat that requires master piloting skills. Try your hand at it!

Managed it at 100% power on 3rd try. A pity the simulation wimps out at 4% of the journey.

When I was an undergraduate many years ago, I thought I’d swim across it, swimming from one continent to another would be pretty cool I thought, think of Byron swimming the Hellespont, anyway no sooner had I found a suitable place to get in than a jeepful of soldiers turned up and asked me what I was doing, listened very politely to my explanations, then informed me that if I went over there they would have to shoot me.
So it is still on my bucket list.

Nice one that, mine’s to cycle round the med once I retire but I think I’d have the same problems in the same part of the med as you!

Did it no problem at full speed twice to 4% without crashing - I think I have found a new career, and can have that backlog of tankers cleared in no time!

I haven’t tried that test, too much to do here, but I don’t need to because I have already done it, for real.

Back in 1964, as a deckhand on an oil tanker I was ‘lucky’ enough to be on the wheel as we went through. The Captain was on the bridge with me but the man who was in charge was the Egyptian Pilot.

He was totally relaxed and gave so few instructions that, out of my sight as he was, I thought he had gone to sleep.

But for me it was the most stressful thing I had done to that date. As you can imagine, my location on the bridge set several hundred metres from the bow and comparatively low down, set my line of sight hundreds of metres in front of it.

Constantly local Arabs would set off to row little boats from one side to the other long after I thought it was safe to do so, and would then disappear from my view under the bow for what seemed like an eternity, only to eventually re-appear on the other side .

An unforgettable, and never to be repeated, experience.

I was amazed in Port Said seeing those immense ships up close for the first time as they went past. I don’t think I had ever really realised how huge they are.

My short MN career covered only 3 different ships. The best, the one I should have stuck with, was the St. John of the South American Saint Line, an 8,000 ton freighter plying between many ports in Europe and S. America.

The last was that tanker, the San Gaspar, a descendant of the famous San Demetrio which was torpedoed, set ablaze, abandoned, then accidentally found and reborded by the crew who extinguished the flames and limped her back to port. She, the Gaspar not the Demetrio of course, under new owners Shell, was renamed while I was aboard, as the Vertagus. Not a pleasant experience for many reasons, not least of which was the dyed in the wool tankermen crew who had a particular dislike of other seafarers, and I finally jumped ship in Sydney to search for happier adventures.

But in between came a very tall ship, Vero. Temporarily ‘on the beach’ and staying with my Aunty Beryl in Southampton, I was sent for in a desperate hurry to join the Queen Mary. Before boarding I stood on the dock under the bow and stared upwards, my head almost at right angles to my spine. I had never seen anything so large. Didn’t stop her dipping that towering bow under the waves as we crossed to New York in the teeth of an Atlantic gale though. Another experience I have been pleased never to have repeated.

Happy memories of the Suez Canal during my MN days. I joined a container ship the TSS City of Edinburgh (75000T) in Southampton in september (if I recall) 1975 sailing to the Far East, it was a quick turnaround returning to Europe again via The Cape. We did another trip to the same ports but but this time went through the Canal as it had opened a few weeks earlier after the big clean up which included mine sweeping etc.
We queued at Port Said and waited for the pilot to get on board. The experience was amazing as our arrival and departure along with dozens of other ships was witnessed by hundreds of people on the quayside. I suppose the Canal was a kind of novelty to the locals ?
Loads of sights as we passed bombed out buildings and destroyed military vehicles along the stretch to the Great Bitter Lakes and then on to the stretch to Suez . Strange thing was that I can’t recall seeing any sign of human life for the time we spent sailing along the canal. Maybe towns have grown up on the banks nowadays ? That was the first of a few visits but the first always seems the most special.

I haven’t tried that test, too much to do here, but I don’t need to because I have already done it, for real.

The last was that tanker, the San Gaspar,

I imagine it felt huge but at 203m long and 26m beam a tiddler compared with the Ever Given - although in 1964 the canal would only have been half its modern width (145 vs 313m - mind blowing how easy it is to find stuff on the net these days) so you’d still have got wedged if you managed to get it sideways.

Thanks for that Paul, it’s years since I saw those pictures, but in my memory I have always thought it was through deck and the bridge, along with all the other accommodation was at the stern. My view over the bow certainly felt like that though and a very quick non-scientific check shows that there was still 100 metres or so of water of which I was completely blind.

But you are right, I always knew it wasn’t a supertanker or bulk carrier in size, but those container ships are really something else, aren’t they? I can’t even see where the bridge is so unless it is right on the prow, a la Titanic (the film, not the ship

), everything must be all done with cctv.

I can’t even see where the bridge is so unless it is right on the prow, a la Titanic (the film, not the ship

), everything must be all done with cctv.

It’s midships, but barely pokes out above the containers.

I don’t know if any of you watches the usually excellent daily (Monday-Friday) programme Quotidien on TMC (channel 10 on the TNT) but a week ago exactly (24th March) they had a very interesting 4-minute piece on the Suez Canal, a potted history of the canal basically. It showed inter alia the successive widenings of the canal. It’s on the TF1 replay, here (at 20 minutes. Registration necessary but dead easy, only an email addy is needed): 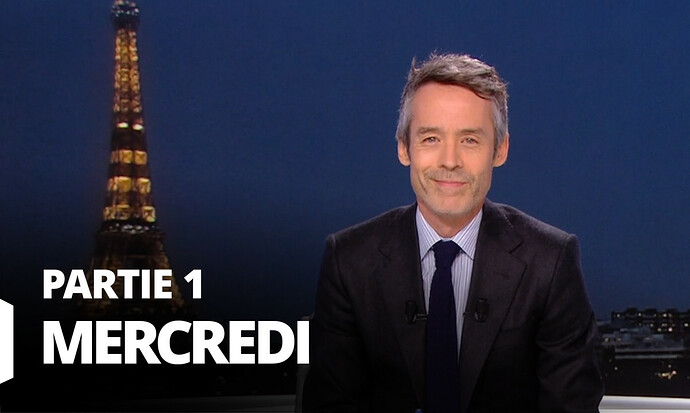 Watchable online through the MyTF1 iplayer: 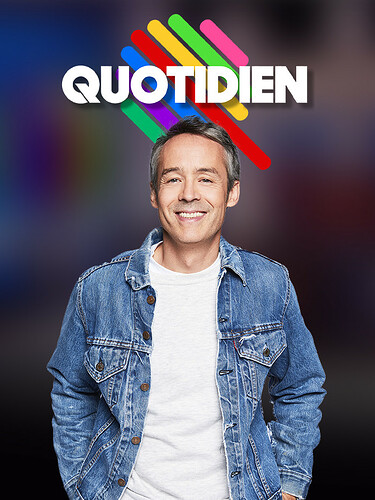 Quotidien often has features on the UK as a matter of fact; current news, society, cultural etc. (there was a 3-minute focus on Will Self a few days ago, in their “BAC” rubric - Brigade des Affaires Culturelles).

There was a laudatory 1’30 minute piece on the handling of the covid vaccination in the UK two evenings ago, here at 12’35: Quotidien, première partie du 30 mars 2021 - Quotidien | TMC.

The English bits are often subtitled and not voiced over, not always unfortunately but they usually go for the sensible subtitles option.

It’s midships, but barely pokes out above the containers.

I thought I saw some sort of a structure there, but the angle of vision must be almost horizontal, I bet they could barely see the sea before the horizon. They must rely on electronic aids.

They must rely on electronic aids. 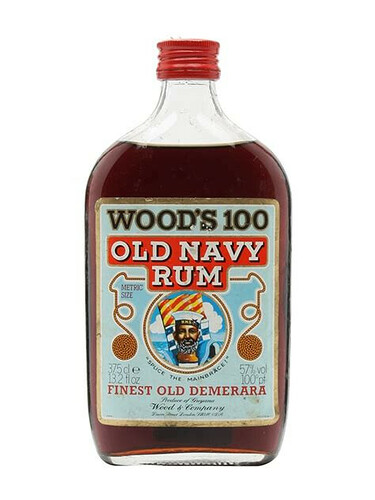 Ah no, that’s just for the Grey Funnel Line, we were all strictly teetotal in the MN.

we were all strictly teetotal in the MN

and the Pope isn’t Catholic…