TV
Just finishing purchasing our new house in Siri’s.
how do you get up tv in France?

VPN and watch online I would think.

We have a satellite dish and Freeview/humax box as internet so poor here.

The same way as you would in the uk is the flip answer.However for french tv either antenna or satalite or on line.

However for french tv either antenna or satalite or on line.

There is a US cable channel called Up - I assumed the question referred to that.

If it was a generic “how do you get TV in France” question the answer is, indeed, “the same as anywhere else”.

Satellite using Freesat channels from Astra (28°SSE). We use a GT Media satellite receiver. One big disadvantage over the Humax boxes (which no longer seem to be available outside the UK), is that the GT Media box doesn’t have the nice EPG interface, just a bog standard satellite receiver user interface. It is programmable though, and you can record to USB (key or disk) from it.

Sorry. yes I was unclear. I want to be able to watch UK channels in Suris. Ideally terrestrial, but also preview and Disney plus. For example you he mentioned Humax. Do I purchase one in the uk and would it just be a plugin and play in france or would there be other issues?

But given in the comment above yours @Philipcatchpole says

I want to be able to watch UK channels in Suris

He is perhaps meaning this place?

Sorry Suris, the district in france

Ah Suris.
Know it well, didn’t live far away.
You can get away with a 60cm dish if you use the Astra satellite.

Not true - just entered Humax Freesat on Amazon.fr this is what came up. 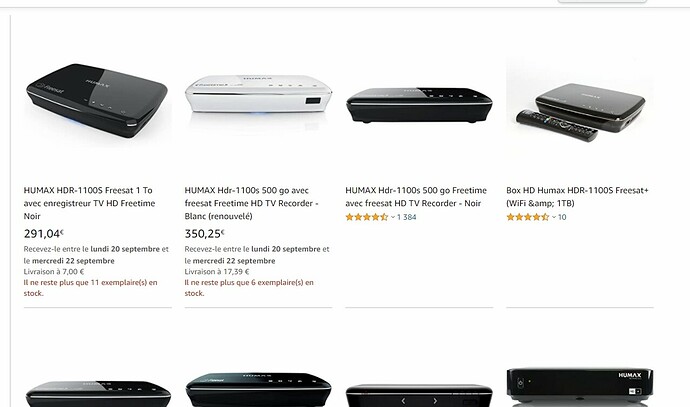 Never used it. Do i find a local company to install one?

Maybe @Philipcatchpole should search this forum for further advice as it’s been covered many times previously i.e. we don’t need yet another thread.

Funnily enough technology speed doubles every 16months, and approaches and equipment are not far behind. Some of us are new to this, and, I for one would help anyone who needs it irrelevant if it has been asked before.

i.e. we don’t need yet another thread.

Yes, you should find someone in Chabanais or Roumazieres .
You can do it yourself of course if you are a bit handy.

Sounds interesting. Where is a good place to start looking for the info to do it myself?

You basically need to buy a box, humax or whatever to receive uk tv, look on internet. I think there are outlets in France run by expats.
You can buy a dish and LNB etc from somewhere like Bricomarche etc.
You then need to put it on a wall or chimney with clear views facing the correct direction , between south and south east if I recall.
Easiest thing is to get a company to do the lot.