Vinegar in the Garden 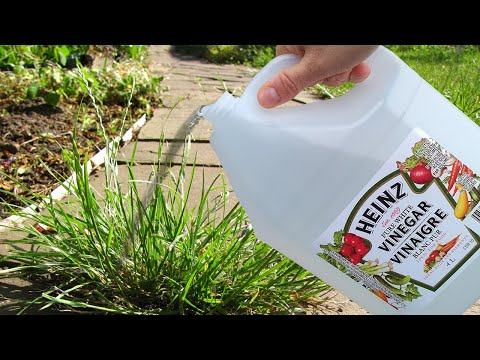 I use white vinegar in a spray bottle to kill the weeds in the paths. I just use it on its own without the salt and washing up liquid. It’s 3.29 in Action for 5 litres.

Has anyone tried some of these tips???

I find US “informationals” are usually tedious and patronising - that one seems not to be an exception.

If you buy the 14° stuff do you use it neat or diluted?

Dilute with hot water, and salt, 90% vinegar.finally a squirt of washing up liquid to make it stick. Results will amaze you.

I wouldn’t put salt on my garden.

Just checking 9 parts vinegar to 1 water - doesn’t seem worth it.

For gravel moderately covered with weeds which I want to clear completely what application rate? - 1l/10m2 enough? Too much? Too little?

I wouldn’t put salt on my garden.

No, but I might on the gravel where I want to clear weeds and disuade them from growing back.

10 % hot water ( boiling) is simply to help destruction. I have some 40 foot of gravel, and we use a battery driven sprayer. load with 5 ltrs of mixture, spray evenly, and watch. Have no idea of covereage. Simply carry on till empty, then repeat.

I previously tried the vinegar, salt, washing up liquid solution on my drive, as really didn’t fancy weeding. The initial results were great, in that it killed off what I could see on the surface, but what I found was that the weeds soon grew back unfortunately. Plus, when what’s aboveground dies, you have all that to clear anyway. I ended up hand weeding and the drive is clear. Every day when I go out I maybe see a couple of new weeds and just pull them - very very quick, and keeps on top of it. I’d love to find a simpler ongoing solution, but for now, I’ll be remaining with the weeding.

Thanks for all your thoughts on Vinegar etc.
The YouTube bit is not my preferred thingy, it is simply something which jogged my memory as I’ve seen this Vinegar stuff suggested elsewhere but dismissed it.
Seems like it works for many of you… so I’ll look again at all the comments and come up with my own Recipe and give it a whirl.
(Another Stella Special… but not edible this time

I’d love to find a simpler ongoing solution, but for now, I’ll be remaining with the weeding.

One way that helps is to have a very deep layer of gravel. Over time the weeds become fewer and those that are there are much easier to pull out because the roots are no deeper than the gravel itself. I also find weeding first thing in the morning is easier - there’s usual been a little bit of dew/moisture over night and the roots are not hanging on so hard. With full on sun they seem to grip more.

This is the simple ongoing solution. I am 79, and find it amply clears my 40 foot wide gravel

Hmmm, mixing 10% boiling water is only going to make the resultant solution 10° warmer than whatever temp the 90% started at - useful for dissolving the salt I guess.

I have some 40 foot of gravel,

So, 12m or thereabouts - is that square?

So, since glyphosate was banned I have been using a pelargonic acid désherbant, it’s very effective at killing foliage but does not kill the roots at all.

It’s also eyewateringly expensive - so far the cheapest option I have found is the 5l concentrated form that Lecroy Merlin sell - it’s currently 62€ for 5l but you dilute it 7:1 (I maybe add a bit more water, say 8:1) so you get 40-45l of working strength solution.

I have about 250m2 of gravel, the working strength solution covers about 10m2 per litre so, in theory, I need about 25l. If I’m careful and treat individual plants in the bits of gravel where things seem to grow less well I can get by with 20l - so easily two complete treatments for my 62€

Casto sell 20l of 14° vinaigre for 38€ - that’s no cheaper if I need to apply it neat at almost the same rate per unit area as the pelargonique, in fact it’s more expensive. I’ve seen it cheaper but the cheapest has been about 27€ - I’ve also found some 20% stuff about the same price which I could dilute maybe 1:2 or 2:3 but we’re still talking about 15€ to spray the whole area and the effects are not terribly persistent.

I can cover the whole area in two not-quite-full tanks of kerosene with the Sheen - probably 10€ worth of fuel. It’s harder work than spraying though and I do get very nervous about setting fire to more than I intended or even using it at all given the French ban on bonfires.

I was hoping vinegar would be cheaper - it seems not.

I ended up hand weeding and the drive is clear. Every day when I go out I maybe see a couple of new weeds and just pull them - very very quick, and keeps on top of it. I’d love to find a simpler ongoing solution, but for now, I’ll be remaining with the weeding.

In the end I think this is the only solution which works and is cheap but it requires one to be permanently in France.

Now, personally I would need no more excuse than the necessity of keeping the gravel clear to make a permanent move to France but, financially, it’s going to have to wait until I either win the lottery or retire.

Back to the drawing board.

Same here, I have given up putting poison on it, I just pull out anything that looks particularly offensive.

And for my vegetable lot that I just planted, I simply take the hoe every couple of days and probably spend no more than 5-10mins turning over any weeds as they emerge - very very little effort so far to keep it looking great

Me too, it’s brilliant. I use the 14% one on my courtyard and it doesn’t need the salt and washing up liquid often recommended. It works really quickly, especially on a hot, sunny day. Best to do it often, while the weeds are very small.