My partner and I and our little dog are considering relocating to SW France, initially, semi-permanantly.
We love the thought of green spaces, historical market towns, woods and rivers (don’t we all?).

We’ve been busy researching and The Dordogne, Charente areas are looking good, and further east to Limousin and Corrèze looks promising but one of our major concerns is climate and it’s variations.

Generally (maybe in the old days before climate change was a thing), the regions mentioned above might be ideal and maybe still are but we obviously don’t want to make any massive mistakes. We don’t mind cooler winters or even hot summers (actually quite like the heat), but we want to steer clear of regions notorious for endless wet, grey days and regions famous for nagging winds, given that the much of these aforementioned regions areas are hilly.

We’re trying to learn as much as we can about the microclimates in the south west. We didn’t want to go too far south or too far east or coastal (particularly), but the more central western areas, we think may well suit.

Having scanned what posts I can find on this subject, I’ve come across quite a lot of reports of endless rain, grey skies and wind! Please tell me that this is not true!!

Any pointers would be so appreciated and many thanks in advance.

Welcome to Survive France Philip!
I’m not in the right area for you but I’m sure others will come along soon. Meanwhile, the T&C’s for the site require you to put your full name on your profile, so if you could do that please that would be great!

Hi Philip and welcome to SF.
Just a simple administrative thing first, please correct your registration to show your first and last name as per site T&C.
We live in the Charente (Dept 16) and have been here over10 years. The climate suits us fine. The Charente is far enough in land from the Atlantic coast of the Charente Maritime for the worst of the Atlantic weather systems to have petered out by the time they get to us and from the east, the Massif Central and it’s high hills and mountains protects us from the east beasts.
All in all, a very calm area we like very much.
Just to add, the Charente is renown for its sunshine - reportedly one of the best areas in France for sun but not necessarily the hottest. Temperatures down to Bordeaux can become fiercely hot and are often shown on the meteo as the highest in the region.

and thanks for the welcome…

As you can imagine, there are lots of people who think like you do, so there will be a lot of advice forthcoming!

I can imagine. Thanks.

One other ching to consider @Prenzl Don’t be too quick to “jump in” and buy the first “dream” property that comes your way.
The general advice is to rent first in the area you are considering to give you time to acclimatise and view properties unhurriedly.
Take your time - you’ll benefit in the end. You’ll find a whole load of advice on here about moving post Brexit which I recommend you read and do ask questions if anything is unclear.

Hi Phillip and welcome to the forum. I’m central Dordogne. I’ve been surprised how much rain we have and how many months of grey can happen (a few years ago it rained from November until April - my poor Aussie brain nearly blew up!). Other winters are on and off with glorious winter sun some days and rain others. No snow which I’ve been very sad about. Winters a mix of mild - I think last year we had only a handful of below zero temps, to freezing - 4 or 5 years ago we had about a week of -12c ever morning! Summers are scorching and it has been normal to see no rain for 3 months on the trot. Temps up to 45c but normally / often around 30c July / August.

We are in the North Dordogne - as Graham Lees notes the actual temperatures can differ from those reported. We are in a little microclimate in a forest which means we are protected from the winds and is often 2 degrees higher than that recorded temp for that day. Highest temp being over 44 degrees a couple of years ago 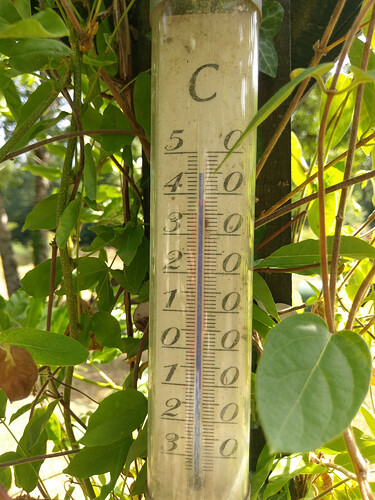 Highest temp being over 44 degrees a couple of years ago

That was the year we bought a big paddling pool in anticipation!

Summers are scorching and it has been normal to see no rain for 3 months on the trot. Temps up to 45c but normally / often around 30c July / August.

Exactly the weather I have moved from Valencia city to avoid. Those 3 months - ‘lockdown by climate’ I called it.

I did post a question on the forum last year ‘Is your lawn the colour of a digestive biscuit?’ I posted the question at the beginning of summer, not the end, so the replies tended along the lines of “Our is lush and green”.

Another thread, which was very revealing, had long-term residents describing how summers were getting hotter and winters wetter and stormier.

I got to Normandy on 2nd Nov last year, so I reckon to have had a full Norman winter, easing into Spring now. It has rained a great deal less than I expected, far less, by miles, than winters in Devon.

I suspect that the summer is going to be like Somerset/Devon but better.

If it is true that blistering summers are moving north, anywhere south of the Loire is going to be subject to that. I too ‘like the heat’ - Singapore, SW USA, India/Pakistan etc - but ageing makes one less tolerant and the ‘too much of a good thing’ starts to factor in.

When a chart like this, without the one ‘cloudy’ day, runs for months on end and the temp is not 18/19C, nor 28/29C but 38/39C, something more moderate becomes very attractive

in those temperatures I put freezer blocks under the chicken house to keep them cooler overnight.

I’m central Dordogne. I’ve been surprised how much rain we have and how many months of grey can happen

We’re in Lot et Garonne south of your Tory and we watch the grey clouds build up to the west of us and then move north of us before they reach the Dordogne!

I think SW France is moving to two seasons:
Wet - winter
Dry - spring, summer, autumn
I fear we have already had our last heavy rain for this year and from now onwards it’ll be occasional showers with few and far between summer storms. Round here every farm has its reservoir and boy do they need them through the summer months.

We have noticed the change in weather since we moved here nearly twelve years ago.
We live in the East and used to get a lot of cold wintry weather coming from Russia.
Now that has totally changed and nearly all our weather is coming from the west in the winter.
It comes from the Atlantic storms that have become a feature of winter.
They hit south-west France and split into two.
One goes up the side of France and then into the channel and the other runs along the Med and causes huge storms in the southern coast of France and Northern Italy.
Spain is seeing an extraordinary change in their weather too.

I’m on the other side in 81
I can see the snow on the top…it can stay there too.

I once drove from Carcassonne to the Tarn via the Black Mountains in February after a snowfall and it was so beautiful it took my breathe away. It was magical, like Narnia!!
Izzy x

I think if you look a little further south and east, you’ll find better weather. I keep plugging the Lot Valley (Lot, Aveyron S Cantal) on this site, not least because I think it’s great usually not too hot in summer, though you might get 40+ for a few days in August, but it doesnt get as cold as the depts to the north nor as wet as those to the NW. Usually, we’re protected by the Massif Central to the immediate north and by the Pyrenees to the west.

Also the landscape is rich and varied, there’s lots of history (though that applies throughout France) and it’s cheap, but architecturally rich.

I should be billing the tourist board for this sort of recommendation!