What Have you Repaired Recently?

Jim has been busy lately repairing things.
He has replaced the thermostat on my shower, the light in the oven, the electric lighting thing on one of my gas rings, the wiring on top of the chicken run and yesterday he stopped a leak in a gulley on the roof.
What have you repaired recently?

I have a venerable pair of sheepskin mocassins the soles of which were disintegrating, leaving small black dots of rubber all around the room.

Before the soles got so holey that there was no base left for another sole, I sent away to China, as you do, and a couple of weeks later two pairs of rubber soles arrived.

Cut down to size, lashings of glue - mocassins with a new lease of life. 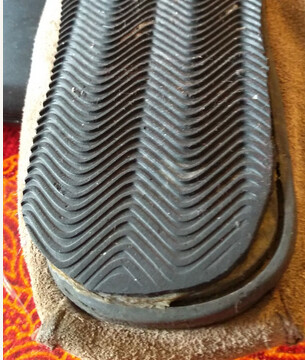 As a reference for the dentist I stuck back together the two pieces which had once been a single implant crown, showing the hole where the titanium post went in. I just thought he might find it useful/interesting.

Usually it’s an olive stone that results in this sort of problem but this was only a crouton, so I reckon he owes me a new one f.o.c. 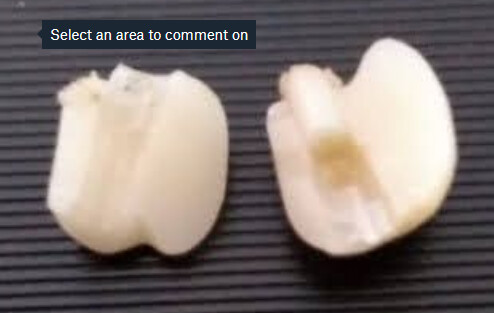 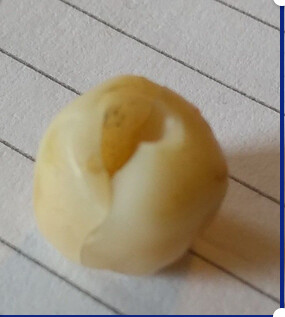 A falling object from a shelf above took the handle off a bone china teacup as it passed. The breaks, at the ends of the handle where they meet the cup, were so clean that since sticking the handle back on, I can’t tell which cup it was.

Actually we don’t, and try not to.

What’s wrong with nipping down to your local cordonnerie, supporting a local business, perhaps getting in a bit of local gossip and, who knows, even making an agreeable new acquaintance? All that for perhaps 50centimes more.

We have just repaired our garden parasol. Was taken away by a storm the other day and ended up with a tear. On the outside I used iron on fabric for repairing umbrellas, and while I was in the haberdashery I saw iron on flowers so have used them on the inside to cover the wound and make it look like a “thing”.

Hubby currently repairing our Punto as it failed it’s MOT. Attempted to fix our coffee machine as it died yesterday, it as the heating element and as the machine is very old and a bit cracked we decided the 15€ for a new element not worth it (and we had a new spare one that was a gift in the barn!). The neighbours laptop this week. He rarely stops actually!

We bought our new fridge (and really really was nearly new - owned by a single lady for 2 years who spent 1/2 the year in Martinque!) for a huge 50€, broken. New price 1600€ . It took him a while to eliminate the problems (think we had it in the middle of the kitche for about 2 weeks! Eventually he managed to refill the gas / clear a blockage he thinks and we have a stunning fridge! Excuse the blurry photo but you get the idea! 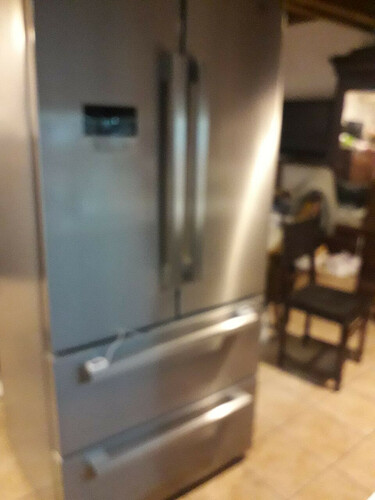 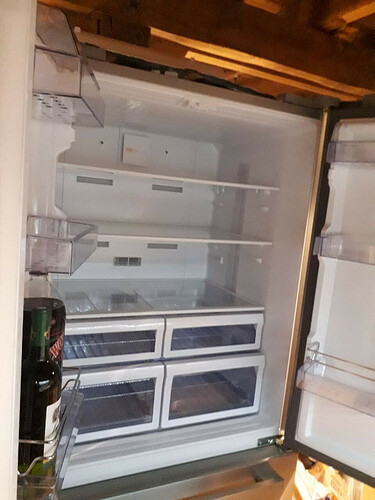 nipping down to your local cordonnerie

Because we don’t have a ‘local cordonnerie’ in Torigni [20 mins round trp]. I’ll leave you to decide the eco-ethics v support local biz by a round trip of 40 mins to St. Lo in the car. [the bus service has been scrapped]

There are loads of everyday items in local shops all over the world, inc FR, that are made in China. Chances are that the ‘local cordonnerie’ uses materials that were made there.

I did try to source soles from a European seller - nothing to do with cost, just timely delivery. But the price differential was absurd and I’ll bite my own kneecaps if their stock didn’t originate east of Suez anyway.

China is in the postion that GB was in during the European Industrial Revolution - “The workshop of the world”. They dominate the small item/cheap item market and they are coming up fast on the rails with big ticket consumer items like TVs, A/C and electric vehicles.

Actually we don’t, and try not to.

This is great in theory, however with the complicated electronic repairs that dh does he is finding it more and more impossible to even source some things in the EU. And as Chris said the price difference can be absolutely absurd - I know he has bought bags of say 50 whatever bits that he has had to buy here in an emergency and got 2 for the same price! Of course also agree with Chris, most of the stuff is made there anyway!

I did the front discs and pads on the Pug yesterday, rear discs/pads/shoes on the Nissan today, replaced tiles and re cemented the front step.
I then made a new cabinet and door for the pets food and OH baking bowls/trays, having a rest this afternoon to watch the football.
Installing a new double glazed window in the main bathroom tomorrow, as long as I can get the old one to come out

front discs and pads on the Pug

I have the rears to do on my 307 and the shockers. From a number of YT vids I have seen, it looks pretty straightfwd, with the right tools.

Did you use a special tool to depress the brake piston? A YT vid did it with a G-cramp. I seem to remember last time I did disc pads [many years ago], easing the piston back before removing the old pads, levering it back by pushing the old inside pad against it.

Is that a fridge freezer, if so it is exactly what I want.
We have a proper whirlpool fridge freezer in stainless steel that I got for half price about 20 odd years ago, it has scratches on the inside of the doors, which you cannot see when closed.
Well done you two.

Because we don’t have a ‘local cordonnerie’ in Torigni [20 mins round trp]. I’ll leave you to decide the eco-ethics v support local biz by a round trip of 40 mins to St. Lo in the car.

We wouldn’t go out for one thing……but add to list for next trip.

There are fewer and fewer small local shops because people don’t use them, so they can’t compete at all on price. Even if the same chinese sourced product (which is not the point I am making). If you want to live in a dead village/small town only full of elderly people who sit indoors by themselves with internet connections then carry on shopping via Amazon. Personally I feel I have very little power to influence apart from consumer power, so I make sure I use it as best I can. And I enjoy interacting with the world whilst doimg so. I accept I am privileged, so don’t have to choose the item that is 50c less.

On a related subject I have a stock of Blakeys for a small army if anyone is in need….

@toryroo what exactly was the problem with your fridge ? We have been given a similar one and despite @james’s best efforts and the fridge repair man, we cannot get the ice machine to work !

we cannot get the ice machine to work

Hahaha! I read a piece about house swapping where the American family went home early because the fridge in the English home didn’t have an ice-maker!

If the Americans could drop the habit of always pushing a glass of crushed ice across the counter in diners, whatever the temperature outside, before they’ve even asked what you do want, the saving in energy would power … ummm … Wales. Or is it Belgium?

A friend’s ice-maker packed up on her Daewoo fridge-freezer and the repair man fixed it, with a new part needed. Probably no direct help unless you are in Herault (34) but it might be a line to investigate.

Watch out when doing the rear pads as many modern cars require the pistons to be screwed in. If you try & push them back you will do serious damage. 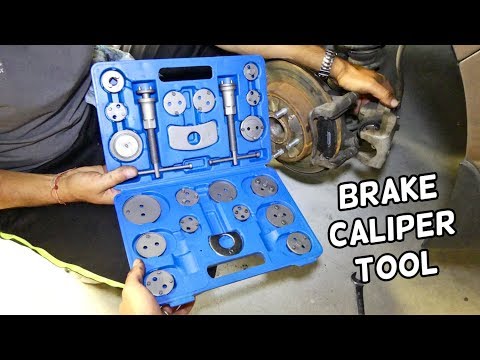 I’ve seen three vids of doing rear pads on a Pug, one of them on exactly my car, to the year. In all cases they pushed back, not screwed. The guy who did ‘my’ car used a G-cramp.

But thanks, Mark. I shall do a round of checking, again.

Odd, but you do things your way. 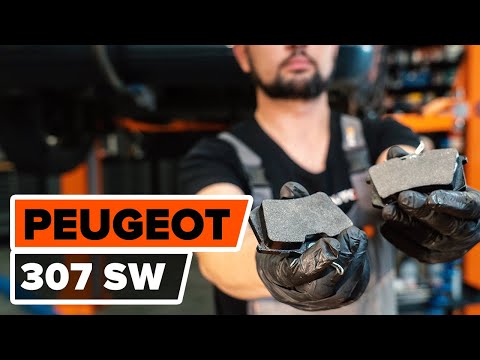 I saw that one, Mark. yes. I have had parts from them. I think they’re excellent.

Maybe he got away with it because he was doing a ‘tutorial’ vid and refitted the same part-worn pads, so he didn’t need to push the piston as far back as when fitting new.

PS. I see that it applies to rear brakes. Front brakes have no screw mechanism. I think the pads I replaced many moons ago were fronts and the replacements on the rears were drums and shoes - remember them?

I needed someone standing over me instructing me for those…

Thanks for the tip.

Also, a lot of comment about grease, esp not to use coppper grease. Is that correct?

doing rear pads on a Pug, one of them on exactly my car,

If they didn’t screw them back they damaged them! It is how the wear is adjusted.
Copper slip used to be used for anti squeak but most pads have that built in.

I have one of the kits Mark showed in his post above and they should be screwed back, a lot of garages still use copper slip but we haven’t for years and never had a customer back complaining about any squeaky brakes.

they should be screwed back,

The guy who did the tutorial vid certainly got a telling-off from a number of posters.
So ,…