Although every cat is an individual there are occasionally times when cats behave in similar ways for a particular reason. There are also behaviours exhibited by cats that are hard to interpret and often confuse. 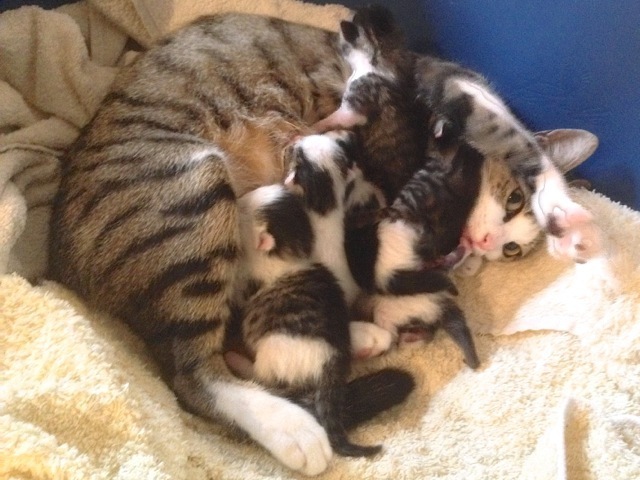 Why do cats purr?

Purring is an extraordinary sound and it isn’t exactly clear how cats do it. Not only domestic cats purr – many of the larger members of the cat family can also generate this vibration.

The behaviour stems from kittenhood, as the mother returns to the den and quietly signals (to avoid attracting attention from predators) that all is OK by purring to her kittens, they in turn suckle and purr at the same time.

Cats will also purr when they are sick or injured; there are various theories for this – the frequency of the purr in sick animals differs from the healthy purr and it may have healing properties or it may be self-soothing when the cat feels at its most vulnerable.

Each and every one of them add to our lives and create a gaping hole when not around. our best wishes.

Sorry for your loss Barbara, she probably purred for both reasons and to reassure her kittens.

to express her pain and, the joy of their arrival?

As well as the sheer act of stroking your buddy lowers blood pressure and helps relax the mind. Cats - gotta have 'em!!

There are many studies too on the human benefits to a cat's purr, it is very, very theraputic.

With two of mine I think it's pure laziness - they simply give a low level version to make me feel better, lol. Or mabe if they're half asleep while getting tummy rubs they're not putting energy into it. Felix on the other hand, when he's licking any available hand, is wide awake and totally going for it.

It would be quite interesting to know also why some cats purr a lot and others rarely.

I'm completely with you on that, having had to go through it. I had to convince myself that somehow they understood I was trying to help and they were loved but it doesn't leave you. Can't think about that - let's stick to happy, burbly purrs and rubbing scent all over your hands. Oh and flipping bed baths from Felix. Much better.

Our Indi does squeaky purrs when he is really happy!

One of the saddest part of our 'job' in the cat charity is having a very sick cat or one that is dying and hearing those last purrs can be very haunting.

That's interesting Lynn. I've known several people who hadn't realised that cats purr when they are hurt or unwell - they had assumed the cat was now fine and simply enjoying cuddles. The level of purr is so different as well. Two of mine are quite low key and you feel the vibration more than hearing the purr itself whereas Felix, bless him, sounds like a car engine. I'm surprised he doesn't choke himself when he gets so excited and "burbly".