I “attended” a British Embassy virtual outreach event on Wednesday. They said they would post a link to the video but not seen this, so thought I’d write up the points I noted at the time. There were questions about people moving now, and pensions and worker’ rights etc etc that I didn’t note can”t remember.

107,000 applications for resident cards to date.

Advised to check passport expiry date as we need 6 months, and passport exchange taking longer at present (since few people can travel this will not affect many!).

As long as you can show you were working as a frontier worker before 31/12/20 then should be no problems with worker’ s S1.

Recognise the huge distress caused by the driving licence debacle. Negotiations are well advanced and the next step is to sign the reciprocal agreement. They hope this will be soon. But fudged questions about what might happen if it doesn’t get signed…

They also pointed out that if the date at 4b on your licence has passed, then it is no longer legal to drive. I didn’t think that was the case as i thought just a misdemeanour and your permit still valid. Who knows, but since there’s little people can do it was ‘t hugely helpful.

Also reminded that it is illegal to renew your UK licence if no longer resident in UK.

There is new work being done in UK to look at 15 year rule for voting. (Pigs might fly I think! No incentive for current administration to give us the vote I imagine)

They do not believe there will be any change to the 90/180 rule for second homes owners. This failed in earlier negotiations and since the UK is now a third country there is no interest from France to treat people any differently from other TCNs

They confirmed that for people who arrived before 31/12/20 as long as you proof of that, and have health cover at the time of making your WARP application that is fine. However they felt that it is prudent to have private health cover for any gap between arrival and entering the State Health system.

Can we clarify what 4b is on the UK licence… ??

Can we clarify what 4b is on the UK licence… ?? 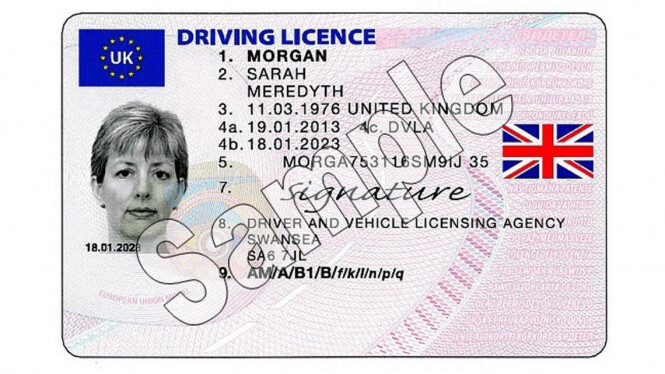 4b Date of expiry.

I wonder if the issue @Stella is that the extension was only for licenses expiring before 31st Dec 2020 (I think) and then only for 11 months, so perhaps there is no extension if a license runs out this year, or if your license expired in (for example) March 2020, so your 11 months are up any day now. In those examples it sounds like they’re saying “until such point as you can exchange it, you can’t drive”

I’m no expert but that’s what I understood. If 4b is now out of date you are grounded… There was a covid extension last year, but I think now passed.

They people who probably know for sure would be the Facebook group I think. As I don’t know how serious this is a a penalty.

4b is date on front when photo card expires. The date when your licence expires is on the back.

Yes I heard exactly the same thing - if your license has expired, then you cannot drive legally

They confirmed that for people who arrived before 31/12/20 as long as you proof of that, and have health cover at the time of making your WARP application that is fine. However they felt that it is prudent to have private health cover for any gap between arrival and entering the State Health system.

@Joyce_Hartley perhaps this confirmation from my information (also from the embassy / MOI) will put your mind at rest. As I suggested probably best you contact the embassy yourself.

It’s awful. And hundreds, if not thousands, of people caught up in the backlog as well as newcomers. For people turning 70 this year it is a particular worry.

Strangely enough… years ago, when one could talk face to face with a real person…
the lady at Perigueux Prefecture said that the UK photo-card expiry date did not matter, so long as the actual UK licence was still good… (not revoked etc) those were the days when I did have the piece of paper as well as the photo card.

Funny how things change… and not always for the better.

It is still a grey area. Despite what embassy person said I remain to be convinced that it is more than a minor infraction to drive with an expired photo card (but within date of validity of licence)… The facebook group who seem to be authoritative say different…

Hopeful this mess will soon be sorted so my OH will not have this problem.

This is a screenshor from the Embassy’s facebook page which confirms that if photocard expired, then you can’t drive. 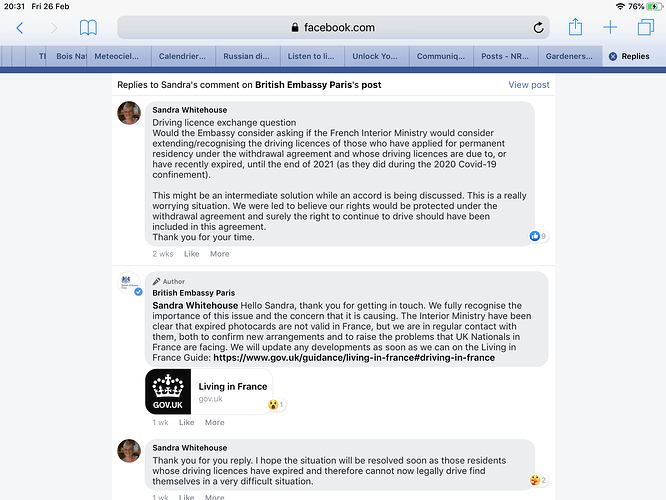 For people turning 70 this year it is a particular worry

An enormous worry…catastrophic if you can’t exchange before then.
Surely there is a dispensation as it is not the licence holders fault that this situation occurs.

“They do not believe there will be any change to the 90/180 rule for second homes owners. This failed in earlier negotiations and since the UK is now a third country there is no interest from France to treat people any differently from other TCNs”
Oh yes there is. If all the second home owners in France can only spend 3 months in France rather than the 6 months that many do, there will be a huge loss of money spent in these “missing” 3 months in the local areas of France by he second home owners. Whist this may not result in an easier visa application process for second home owners, I’m sure local French businesses would certainly suggest there is an interest/incentive

All these things come down from Paris and I don’t imagine that many second home owners live there.
It wouldn’t even have occurred to them that Brits help out with local economies.

Probably varies from area to area.

Many 2nd home owners arrive here with their cars jammed with stuff from UK.
Yes, they will do some shopping and frequent the local bars… but they are not a large part of the economy, not around where I live.

Must confess many Dutch pals do similarly… but they dish out the Dutch goodies they have brought with them, then go round the local shops to buy some tasty French goodies.

Yes, they tell me that the Dutch can buy a “vacation pack” in the Netherlands which they bring down for the vacation. Only perishables are bought here. I’ve visited the Netherlands many, many times, my old firm had several facilities there, and I like the country and people, but I wouldn’t have put culinary excellence very high up the list of their many worthwhile attributes. Apart from Rijsttafel that is

they invite the whole village and we have a wonderful party…

Yes, they are good at cheese - hope your not smoking any of their “special” ciggies Stella

There is a document on the Driving Licence Exchange FB group, provided by Kim Cranstoun, to carry in your vehicle if the 4b has expired.

If all the second home owners in France