I moved permanently to France last year. I brought with me a Ford Transit van which I ordered to my specification in March 2011 and received in June 2011. I am trying to get it registered in France but have hit a problem: Ford UK will not issue a Certificate of Conformity because they say the base vehicle was actually built before Sep 2010. The local Controle Technique won’t test it without a CoC (won’t accept the Type Approval number as a substitute either), so I am rather stumped.

I would be very grateful for any suggestions?

I think this is what you need, I’m going to suggest that the test center is not up to speed, I would show them this or try a different test center. Where in France are you? 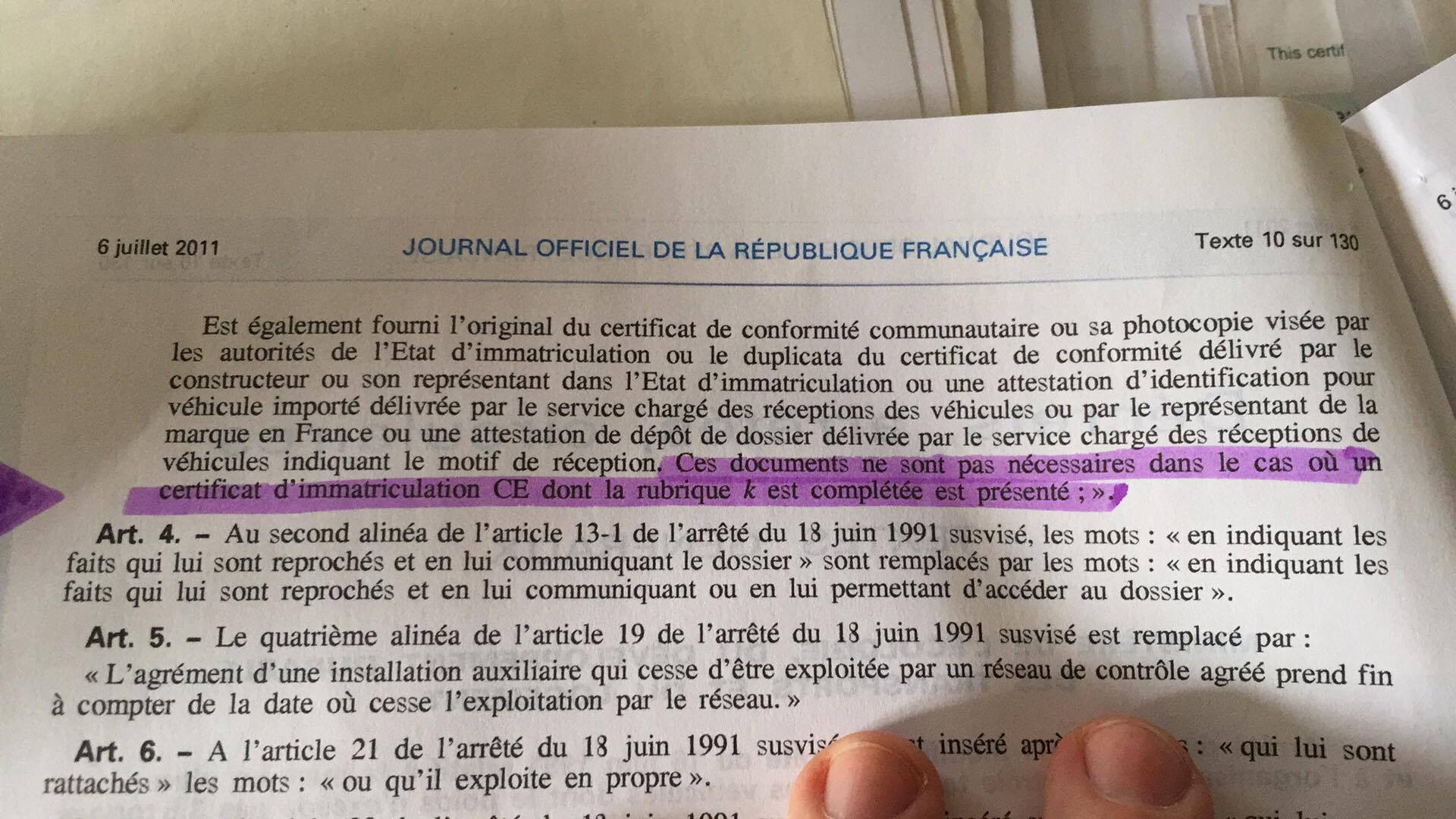 Thanks very much for this James. I am near Morlaix in Finistere - so plenty of test centers near by.
Cheers
Tim

Yes, you are correct, James. The conformity cert is only accepted for CTs if the GVW is less than 3500 kgs.

I had a similar issue with Vauxhall with my Vivaro. They issued a “Partial Certificate of Conformity” The local Centre did the CT but I had to take it to be tested at a DRIRE centre. The guy there was very helpful. All he did was check that all of the glass and lenses were CE marked and he issued the Carte Gris.

Thanks for this John. I thought I was home and dry after showing the guy at the Contole Technique James’s scan of the rules. Unfortunately the type approval number format does not fit with the French CT computer fields. Can I go to a DREAL / DRIRE centre and get a suitable numero reception-type? If so how do I find the DREAL centre that will do this?

I have just contacted Mercedes for the CoC for my van and they want €350 to issue it, has anyone else registered a Sprinter van over here and if so is there a cheaper way of getting the CoC. What is really annoying is on the same email is a link to request the CoC if you were exporting the same van out of France and its €85 or if importing a new van in its €150, I just think €350 is a bit much.

Hi Stella,
i contacted Merc UK first and they said that i would need to contact Merc France and gave me a contact, They advised this as they claimed that when they issued them in the past there always seemed to be a problem with it.

Mmmm… very odd. We bought a 2005 MB car in UK in 2012 and brought it to France. It had a CoC in the original paperwork…in about a million languages…

no problems at all in getting the car registered.

Re my Ford van I had to get an attestation from Homologation at Ford France. ( Euros 170). Now booked for control technique tomorrow so fingers crossed.

The CoC has to come from France, but beware, there are a few scamming sites (I know this from personal experience) so it is easier and in the long run cheaper to go to the manufacturer in france.

Which CoC has to come from France? CoCs come from the manufacturer, usually from the country where the vehicle was first registered.

Thats why i cant understand why Merc UK are so reluctant to issue mine, I have asked them twice and they just say when theyve done them in the past they have had issues with them being accepted in France so they advise getting it through Merc France,

Merc have told me that it cost €350 due to the amount of paperwork they have to do, yet ford can do the same paperwork for €170, Bloody annoying

This is intriguing… and I await the final outcome with great interest.

Perhaps your MB Sprinter was built outside of the European Union… as many were… perhaps this is the hiccup.

If a CoC exists for your vehicle there is virtually no cost to the manufacturer other than making a few keyboard strokes and getting the original copy from the printer. If a charge is made it is for providing the service and perhaps that tells you a lot about the emphasis that the company places on customer service. I’ve got CoCs from three German car companies. Two were free, the third cost €100. Mind you the expensive one did come in French and was printed on very expensive looking paper. At the end of the day all three were accepted and the cars registered.

Ford UK said they couldn’t issue a CoC as the van was built before September 2011!
The significance of the date eludes me.