Charges on parcel from the UK

I have had a Gift from my Son in the UK although it was a gift he had to make a declaration of value before the carrier would accept it. He made a nominal declaration of £35.00. It was delivered by Chronopost but before they would deliver it I had to pay 15.50 euros. which was 20% of the declared value plus admin charge. I have paid this but I cant see how this can be as my Son paid VAT when he brought the gift in the UK and this was not a commercial transaction. Any knowlegable person throw any light on this please.

Makes no difference now that we are out of the EU I’m afraid.

For more valuable gifts it might be possible to avoid paying UK VAT if the right paperwork is filled in to show that it is going to be exported but EU VAT needs to be collected on import to the EU whatever was paid in the UK.

I had a parcel delivered via chronopost from new item on ebay, i questioned the seller regarding double taxation, and said the the government had given instruction that the UK vat should be refunded, and thats what he did, he was not happy and i doubt he would not have offered if i had not challenged it

It’s not VAT, it’s a handling charge for the courier checking that the tax declarations are correct.

This has always been the case for external shipments/parcels arriving into the EU from non-EU countries.

It’s not VAT, it’s a handling charge for the courier checking that the tax declarations are correct.

Anything from the USA shipped via USPS is/was handled by Parcel Force Worldwide at the U.K. end and there was always a £13.50 fee on anything they had to physically check even if it was seen to be worth less than the VAT/Import Duty threshold.

I think RM charges about £8. It’s certainly not implausible it was both VAT and handling fee, especially as Malcolm mentioned 20% plus admin fee.

Unfortunately courier companies like their extra sliver of silver from the coin when goods cross customs borders, even if there is not much actual work involved these days. It’s one of those Brexit benefits that we keep hearing about (well, for the couriers, rather less so for the people sending and receiving parcels).

I’ve had two parcels from my family in recent weeks, both with the CN22/CN23 declaring them as gifts under 35€, and both arrived by the post person with no extra charge.

If these were newly purchased items had your son made clear that VAT had been paid by attaching the facture?

They know that they have people over a barrel.

I think we all just have to find EU alternatives to ordering from the UK. A lot of Dutch sites seem to be in English and German postage is very good (cheaper than french!).

I think we all just have to find EU alternatives to ordering from the UK.

People will, of course - to the detriment of UK SME’s

Which is why I find Mr Powell’s claims difficult to swallow. Firms that have gone bust will not be driving the UK to dominance on the global trade scene.

I can’t remember the last time I ordered anything from the UK. One one hand that’s a nuisance as it’s useful to buy thing in ££s as half our income is in ££s. But I’ve found better suppliers here, or in other EU countries, which now have far less hassle.

I think we all just have to find EU alternatives to ordering from the UK. A lot of Dutch sites seem to be in English and German postage is very good (cheaper than french!).

Exactly what I have been doing, the only things I buy from the UK now are Kindle downloads. I do use the Amazon UK site to read about stuff I am interested in though, and then go to de. or f. to buy.

Actual experience with FedEx, TNT and DHL privately and at my previous employer. They aren’t charities.

See also discussion on above thread…

somebody told me, or I read, that from 1st June or July the threshold below which French customs waived the VAT is being was being removed. Because I think e-commerce sites in the far East were abusing it…or have I got the wrong end of the stick?

1 July the previous exemption for packages valued under 22 euros disappears.

What I simply dont understand is what were Britain’s negotiators actually negotiating with the EU as a trade deal to include consumers? Why have Switzerland, Iceland, Norway, Liechtenstein got the same as EU countries when they’re not EU and yet British negotiators apparently didn’t even bother to secure at least the same deal those other non-EU countries got for their consumers and probably their small businesses as well.

It certainly pays to shop around & do your homework.
I am a bit cruel to watches & my job (plus my tendency to wear it 24/7) means that they get a bit of a bashing.
Currently my favourite brand is made in China & it has to be said the quality is very good.
I use UK eBay but check the country of despatch as prices can vary, in this case a difference of £31.49!
Here it is, available from two different sources - 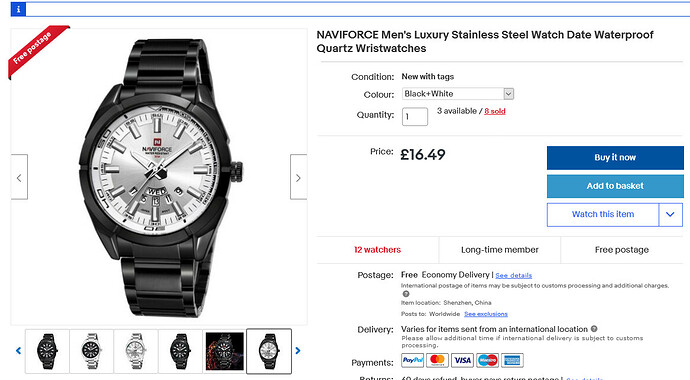 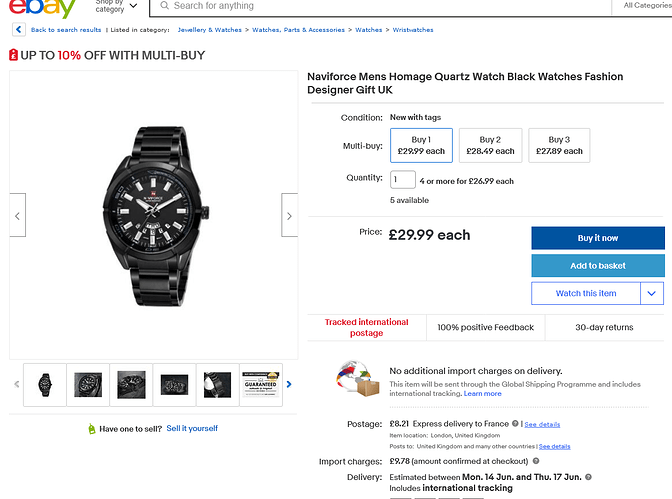 Because the UK negotiators were almost all entirely inexperienced - and thus not terribly good, and led by oafish, Europhobic ideologues.

Follow the lead of the Chinese - whatever you send its value is £9.99 (or $13), which is below the taxation level.
Without checking and relying on my diminishing memory, I believe that you can return ‘property’ without paying duty (ie: you left it at your son’s after your last visit).
As far as I’m concerned, the way politicians get away with everything, if I can find a loophole I’ll definitely give it a go!