Cost of having a Baby in France (NO Carte Vitale)

Myself and my wife have lived in France for nearly 1.5 years now, and amazingly STILL do not have our Carte Vitales. I work as an Auto-Entrepreneur, and have a SS number (but not CV yet), my wife is ‘inactive’, and does not work at all. She has applied via PUMa for a Carte Vitale, but so far has received NOTHING (amazing eh!).

Anyway, we are considering trying for a baby later this year, and looking at options if she didn’t get her CV in time. I can’t find any sort of information on the ameli website on any sort of costs for having a baby, from the initial visits/scans, right through the birth.

Does anyone know the costs for the various baby scans and visits + birth, assuming we paid for it all upfront, as no SS or CV? Or where I can find the costs?

If my wife did receive a Social Security number, but no CV, can we still claim back what we paid on the healthcare just with that, or can the claims only be made once the CV has been received?

A carte vitale is simply a card that you can use to access healthcare without paying upfront. Just like a bank card is a card that you can use pay for things in shops without using cash. You can have a bank account even if you don’t have a bank card. You can have healthcare entitlement even if you don’t have a carte vitale.
The important thing is whether or not you have opened a bank account, or in this case, opened your rights to health cover.
Haven’t you asked CPAM why your wife’s application is taking so long?

EDIT - If you’re both Brits then regardless of having a baby your wife needs to get her healthcare sorted out by the end of the year otherwise she risks finding herself in trouble with her carte de séjour application. Any period spent living in France with no health cover in place won’t count as a period of legal residence.

Thanks for the reply Anna.

I forgot to mention that she DID get a reply from her initial application, asking for additional info (proof of income from me, etc). This was all sent in Nov, and resent again recently (in case they didn’t get it!).

We called and they said there was a huge backlog and we just have to wait.

Some answers here. Not cheap.
Some more (slightly vaguer) information here. This page goes on the assumption that you are covered by both the sécurité sociale and have a top up health insurance (mutuelle).
Please physically go and talk to your local CPAM to find out what’s going on with your (and your wife’s) application for health cover.

As long as they have all the paperwork, I think (hopefully somebody will confirm) that when she does get accepted onto PUMA, her cover will be backdated to the date of her application.

Certainly used to be the case cos folks used to save up all their feuilles de soins and then claim refunds when their attestations came through.

It shouldn’t come to needing private healthcare. If you only sent them what they needed in November, well since then it’s been strikes and holidays and not that many working days. Hopefully it will be through in the next month or so.

As regards your own cover, if you have a number you should be able to open an espace client / online account with LA RAM or whichever caisse you chose. You should be able to download an attestation from your espace client, which will show the date your cover started. Maybe you can even track the process of your carte vitale on there as well, I don’t know.

My understanding is that you can only apply for individual CDS, and not make a joint application.
However, if you are married or in a civil partnership, your partner can apply for a family-link CDS on the basis of that marital/civil partnership link - it will be still be a separate application though and generally assumes that at least one of you already has a CDS. If you get divorced, after obtaining a family-link CDS, things might get complicated as, it looks like there will be no future automatic guarantee of a right to stay post-Brexit, as I currently understand it (YMMV). It appears that such a situation would also apply to any children born during the marriage unless one of the parents has exclusive ward of court. Stuff like this is not easy to predict one way or the other currently, as we’re not yet outside of the transition period, and no further deals have yet been concluded. Worst case scenario, such families would be treated like any other 3rd party nation (i.e. non-EU/EEA) and therefore potentially oustable.

Thanks for your answers - very helpful! I had already stumbled upon both those websites Alex, and they seem quite vague. €300-3000 euros is a huge difference in cost! I would have thought there would have at at least been some base price tarifs on ameli.fr, but I can’t find any

My Caisse was switched recently by the government, which has no doubt caused some issues and delays with my CV. I can’t create an online account either, it says it’s not available for me at the moment. Probably still in the process of being switched!

We definitely will feel more comfortable once my wife at least has her SS number. The CV is a nice to have, but sounds like we can get reimbursements on the pregnancy cost without it.

I think you may be making it more complicated than it is.
Russell’s wife is inactif. EU inactifs need to prove sufficient income to be self supporting. Although she makes a separate CDS application, it’s still the household income that’s taken into account. Therefore as long the household income, ie Russell’s earnings, is sufficient, her CdS application should go straight through.

Well it was never the plan! We had NHS coverage whilst we applied for healthcare, but Stage 2 of my wife’s PUMA application required a letter from the NHS cutting ties with us - we figured it would have been sorted by now!

By rights, France should backdate the opening of your rights to the date the NHS signed you off.
That’s how it’s supposed to work as per the EU healthcare coordination arrangements.

I suggest you start investigating Health Insurance asap… it is never a good idea to leave the door open to huge medical bills… which can mount up even if one is actually in the French Health system, as that system only pays part of the costs and sometimes nothing at all.

On another front… are you signed-on with a French Doctor ???

Hi Russel, to confirm previous statements the good news is that you’ll be able to claim back on any expenses as long as you have the SS number. In regard to the “cost” of having a baby doctors are like baby toys, some have plenty of consultations some have very few, some go to “high end” consultants and others just go to the local one gong with the “tarif de convention” (100% refunded by SS) so that’s why you see all these vague figures. A consultations for a screening for example can range from de tarif de convention (48.35€ the first one, 81.92€ the second one) to twice that amount (and some charge probably even more but so far that’s what I’ve seen).

If there are complications (even minor) expenses can pile up very quickly as well hence the more difficult to provide some figures.

But basically you can expect somewhat 4 screenings, a couple of “training sessions” (free or price of a basic consultation) a couple of blood tests (around 50€ each) and of course the hospitalisation itself but the “forfait journalier hospitalisation” is “only” 20€per day. If you don’t go for any options that’s basically all. Of course you’ll then have to consider all the stuff that goes along having a babby (toddler’s bed, diapers, toys, etc.) but this is another story

Finally, in regard to getting into the system you should call the English speaking helpline but make sure you don’t hang up until you have some answers about what’s next, call multiple times if necessary or ask for a physical meeting but you should take the matter very seriously as things may get ugly pretty quickly so you’re still in a nice situation (basically where everything is free or cheap) and should deal with that before that process costs in the thousands (literally, I’m dealing with a lot of US expats and other non-EU citizen, believe you would not like to be in their shoes when applying for a CdS - financially speaking I mean).

Let me know if you have any extra questions?

Hi Russell, my daughter recently had her first child and her scans were 140€ plus the cost of blood tests and other appointments, she has the paperwork with her so can’t check the other costs (that just stuck in my mind). They moved back to the U.K. before the baby was born as her OH had a job offer that was far better paid than his job here so no idea how much birth at hospital would’ve been. Getting CV sorted is a priority because it would be extremely expensive otherwise, especially if things didn’t go to plan - my daughter ended up having an emergency cesarean.

If you are in the system and go to all your checkups, have tests,scans, whatever etc prescribed(there are 2 compulsory checkups) then it is 100% reimbursed.

@vero do you mean it is all FREE ? if you are in the system…

Yes, having a baby is covered 100%, (in my experience, obviously.) Look up what it says in the guidelines but I am fairly sure that is the case, childbirth and antenatal/perinatal care is free.

Great, it that is indeed so… my query was due to the fact that it can be confusing for folk when talking about getting 100% …100% of what??? 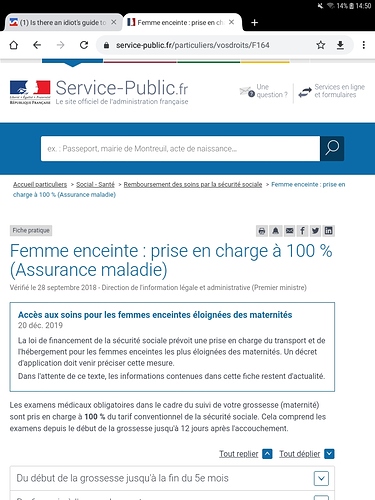