A few days ago I had a heated debate with an elderly conspiracy theorist, who argued that Macron was inflating the CV figures in order to ‘vaccinate everyone’ but he couldn’t explain why the UK was trying to do the reverse, ie. trying to keep the total down.

Meanwhile, I couldn’t figure why UK death figures in the UK and international press have remained below 130,000 for so long, whereas in the French press reported deaths in France have continued to climb. However the following is pasted from a UK gov website (and edited for conciseness/clarity)

Deaths with COVID-19 on the death certificate

Weekly: 392 deaths where COVID-19 is mentioned as a cause on the death certificate, registered during the week ending Friday, 23 July 2021.

Johnson’s gov is using a different set of criteria to keep the UK’s Covid death toll down. I’d been aware of this for a while but the disparity between the figures is now becoming considerable . Over 20, 000 UK Covid deaths haven’t been recorded as such.

Bojo is a master of fiddling figures for everything, I wouldn’t trust anything from them even if they told me the UK flag was red,white and blue.
Massaging and manipulation of figures is second nature to them.

Where’s our recent much missed friend when we need him?

Bojo is a master of fiddling figures for everything,

I’m not convinced Johnson is a master of anything except his own furtherment.

I wouldn’t trust anything from them even if they told me the UK flag was red,white and blue.

Where’s our recent much missed friend when we need him?

Ah, he of whom we must not speak, the one who came to our lands from the North, but who returned to from whence he had cometh…

Verily, I am sure he will return to our shores.

A ghostly presence stirs at the mention of his name…

A few days ago I had a heated debate with an elderly conspiracy theorist, who argued that Macron was inflating the CV figures in order to ‘vaccinate everyone’ but he couldn’t explain why the UK was trying to do the reverse, ie. trying to keep the total down.

I actually doubt either set of Covid figures is being actively manipulated - a mixture of Occam’s and Hanlon’s razors applies but the situation is “interesting”.

In the UK we appear to have peaked and cases are falling. 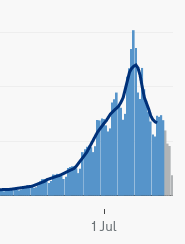 On the face of it this seems odd - after all, wasn’t everyone (me included) predicting 100,000 cases a day?

No - you have to go on the data that is available - anything else is speculation and up to a few weeks ago cases were, indeed rising rapidly so caution was certainly appropriate.
There are several factors:

There is the “pingdemic” and the headlines surrounding the negative effects of test and trace in causing a lot of people to be “pinged” and having to isolate. So much so that large numbers of professions have been identified where employers can request daily lateral flows instead of employees having to self-isolate. Of course this is a function of the number of positive cases but the tabloids in particular don’t seem to have focussed on this. There is <a href=“https://www.bbc.co.uk/news/57779371”>some evidence that people are deleting the app which is going to result in fewer contacts being identified and fewer people subsequently getting tested.

There is also the fact that fewer tests are being done (sorry, did have a link to some figures but mislaid) - the government counts tests sent out but the number being processed by the labs is down much more.

There are also a couple of drivers which have ended - the Euros being one of them Covid: Watching Euros may be behind rise in infections in men - BBC News.

Finally the kids are off school and it is warm and sunny (some of the time) - both factors are likely to lower case numbers. Covid is a respiratory virus and these are naturally less prevalent in the summer when people are more likely to be interacting outside in fresh air, than inside in stuffy, poorly ventilated spaces which allow much more viral transmission.

If the case numbers are unreliable (mainly for the first two reasons above) what can we look at to determine the real trend? - well, hospital admissions has always been a good indicator and these look to be falling as well. 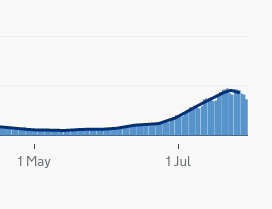 So the fall in cases looks “real”. Though a note of caution is the ONS survey data - this is random sampling of the population whether symptomatic or not so likely to be much more accurate. This is still showing a rise but it is somewhat delayed compared to the case data so might start to reflect the downturn in a week or so. 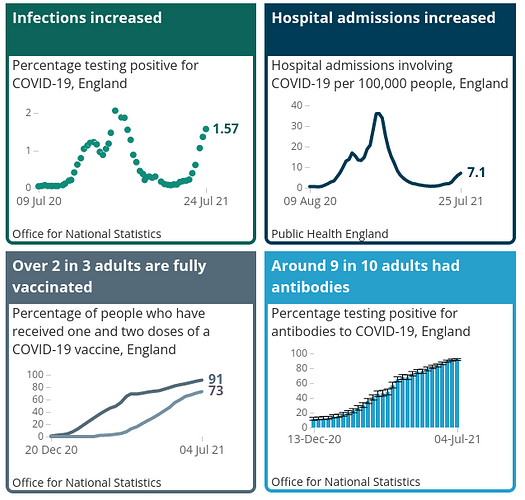 What is especially interesting about these figures is the estimation that 90% of the population have antibodies - that’s real “herd immunity” levels so the final fact or in the UK is that the virus just could be starting to run out of people to infect.

For France, the first question I’d as is “are the rates going up”?

In fact the answer seems to be “no, not any longer”, at least for large parts of France. 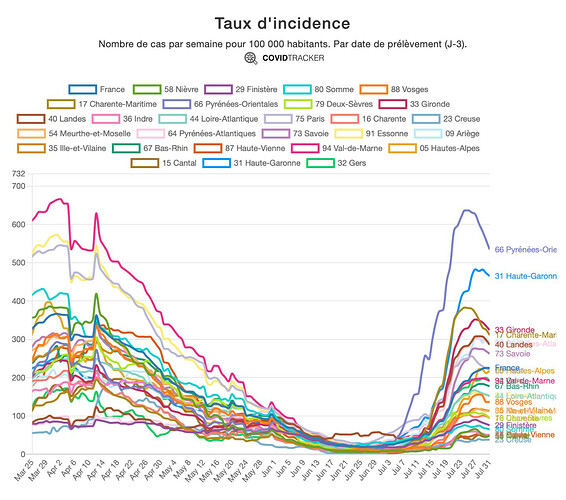 Over large swathes of France the rate has also peaked in the last week or so.

Some factors are probably shared - especially the fact that kids are off school.

My gut feeling at the moment is that we will see steady or falling numbers through August and early September, probably in both countries, but there is a risk that once the kids are back at school and exchanging not just stories about their summer hols but virus as well that cases could rise again. Slightly cynically I have decided to take advantage and scheduled another trip over for just after the kids have gone back but before the numbers are likely to have caught up

However vaccination is going well - especially in France with Macron’s incentives, less so in the UK but even here 30k a day is a million a month, and there is talk of a 3rd booster vaccination for the over 50’s and vulnerable given that there is evidence immunity fades a bit after 6 months (eg see UK scientists back Covid boosters as study finds post-jab falls in antibodies | Vaccines and immunisation | The Guardian).

The good news is that a booster dose may be relatively more effective against variants, including Beta (see this report in the Independent - Moderna vaccine booster may offer protection against Covid variants, early study suggests).

I’ll be queueing up for mine (along with the 'flu jab), whatever Helen says

On deaths I suspect MarkH is right - Chris Giles (https://twitter.com/ChrisGiles_) from the FT ran a series of estimates for a long time when it was obvious from ONS data that the excess deaths were higher than the official reports but he stopped when the two sets of figures aligned more closely.

I believe we may never know the true number of excess deaths.

The online Ouija board has been returned to the data cabinet…

If you have the Ouija board out at some point again, can you say thanks for that and I hope the spiritual trip to France went well

can you say thanks for that

Me too, really appreciate having someone make sense of the data. Hope the next trip happens.

Hope he got back to UK (and work) safely.

What is especially interesting about these figures is the estimation that 90% of the population have antibodies - that’s real “herd immunity” levels so the final fact or in the UK is that the virus just could be starting to run out of people to infect.

I wonder if we will see hospitalisations increase towards the autumn as the vaccines lose their potency?
As far as I know, only Israel has started to give booster jabs.

It’s interesting how the highest incidence of positive tests has shifted from Paris and other major centres to the Med and Atlantic coasts. I think this might not simply due to the obvious, but also the type of tourist, compared with other holiday areas.

Here in the upper Lot Valley at present is seems as though every other vehicle going past our house is a amper van, but I assume the following of the occupants:
Adults are probably middle aged and vaccinated, with most social mixing occurring in small outdoor groups, whereas at the coast there’ll be a higher percentage of young single people, a smaller percentage will be vaccinated and there’ll be much more socialising in crowded bars and clubs.

Also, have just read ‘that fully vaccinated people may be less likely than unvaccinated people to pass the virus on to others, due to having a smaller viral load on average and therefore likely shedding less virus.’

I now believe in ghosts…

due to having a smaller viral load on average and therefore likely shedding less virus.’

I thought that was not true of the Delta variant - I wonder if the Guardian has got that right?

It’s mentioned in the actual report from Imperial College, 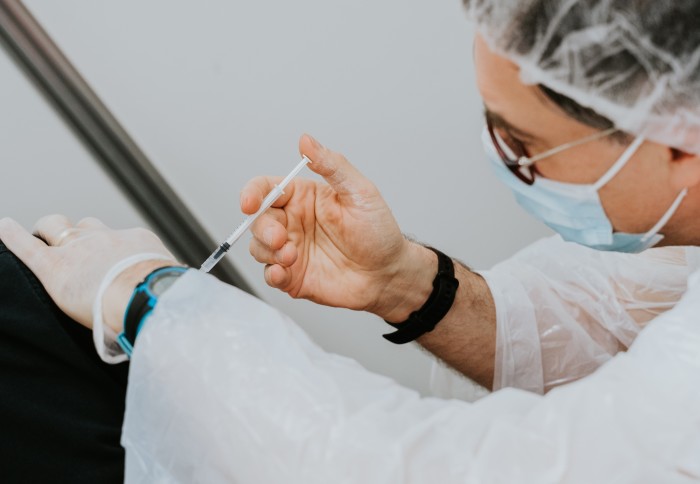 The early reports were 64% protection from infection weren’t they - which is consistent with 1/3 the rate of infection among the fully vaccinated.

So much for the claim that vaccination only makes the illness milder.

using a different set of criteria

Yes, I noticed that a while ago. I googled UK death toll and it gave me two different numbers. I quoted the 150K then got the jitters I’d misinformed but no, the 150K is the correct number.

Also, have just read ‘that fully vaccinated people may be less likely than unvaccinated people to pass the virus on to others, due to having a smaller viral load on average and therefore likely shedding less virus.’

That is good news!

perhaps then its a case of comparing apples with oranges…
Who knows what criteria Doris is relying on this week to massage his world beating strategy (if that’s not a contradiction in terms).