Dogs in France - I wish they didn't! 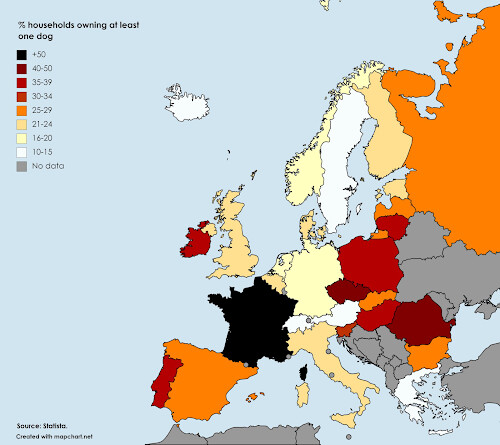 France has the highest number of households with dogs and I wish they didn’t - at least not round here. Ten in the house at the top of our chemin. Six hunt dogs in a cage only let out during hunt season at our neighbours across the fields, Every single house down to the village with at least one often more dog(s) in the garden, not as companions or pets, merely as a guard dog, either chained or just running back and forth along the fence. Never walked, shouted at when they do their job and bark. Quite frankly, feels wretched.

I think the results are skewed because of hunting here being a very popular pastime in rural area. My non-scientific surveys says pet dog ownership is pretty much the same here as UK. Handbag dogs in town, real dogs in the countryside.

I dread the day our next door neighbour moves and we risk having someone with hunting dogs move in. This has happened to friends of ours, as new house built on a plot opposite them that was previously part of a bigger garden. And there’s nothing they can do.

At first I was amazed at those percentages, but then I realised from your text that it obviously includes hunting dogs, not just pets. It would certainly alter the figure for the UK upwards I think, and downwards for France.

We have a dog and there are 3 other households in our 9 house LD also. I don’t see or hear many down in the village, certainly not the numbers which you experience.

Before I started our gite I really worried that guests would be put off by all the dogs around us barking so I manage expectations in our T&C and have a paragraph about the fact that we are surrounded by working farms and along with that comes countryside noises and smells. What I now realise is that most of our guests come from urban locations with constant noise and so dogs barking across a couple of fields isn’t that much of an issue for them. It bugs us more because it’s changed in the 14 years we’ve been here - elderly neighbours replaced with younger families all of whom have got these wretched guard dogs and /or hunt dogs.

I had a very bad experience with a barking dog, so I am extremely leary of the problem

The flat next door to me in Valencia was home to a depressive alcoholic who had a dog she never let out of her flat - never. The stench was indescribable. This dog was, on account of its owner, literally barking mad. It was insane. It barked and howled non-stop for as long as she was not at home, which could be 24-36-48 hrs at a time.

The woman had colon cancer. After endless complaints about the noise, she took to drugging it before she went out drinking, presumably with her medication, because all would go quiet of 6-8 hrs. Then, as it gradually came to, it would start barking again, until it was back to full hysterical pitch.

Two years of misery only solved by her death.

There are two dogs on chains in Placy-Montaigu, about 1 km away. They are non-stop barkers but just far enough away to not be irritating or worse. The neighbours are afraid of the owner because he is a large man of violent tendencies.

I was warned off a property on my faves list by the agent - “Problem dog next door”. I was amazed at this revelation.

As for those figures - every flat in Spanish cities has ‘a rat on a string’. I was surprised at the number of dogs in the city. They just love them - tiny chihuahuas and micro Jack Russells. These dogs are usually allowed to occupy the balconies of flats, where they rocket up and down, barking furiously at every passer-by, even from 5-6-7 stories up.

I had one opposite and one floor down. It’s very tedious but the Spanish are renowned for tolerating absurd levels of noise. 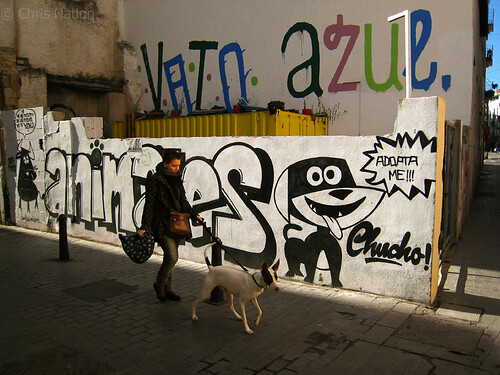 This guy keeps himself to himself, I think. 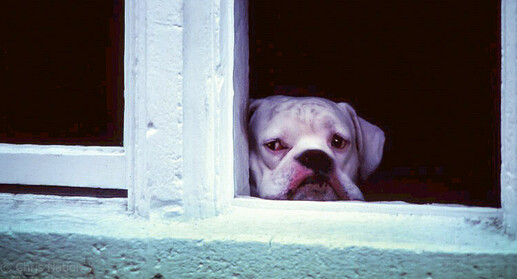 My great-grandmother categorised dogs into 3 types: 1. food 2. working dogs 3. pets , there was a clear distinction between them and how they look, what they eat etc, she was perfectly matter of fact about it.

Great grandmother I can understand, but still, today? Really? And how is a dog “working” if it is tied up or caged? Our local farmer has a wonderful Jack who goes everywhere with him on the back of the tractor - that is a serious working dog. We took over my parents’ Jack (Toby) when it was all too much for Dad. Toby used to come to work with me every day and got walked on Clapham Common at lunchtime and on the way home. He walked into the office as if he owned the place and slept in a bed under my desk. He knew he was a working dog!

Great grandmother I can understand, but still, today? Really? And how is a dog “working” if it is tied up or caged? Our local farmer has a wonderful Jack who goes everywhere with him on the back of the tractor - that is a serious working dog.

My ggm had pet dogs, Irish setters who followed her about everywhere and especially when she went riding etc, working dogs were guard dogs I suppose and dogs for eating were white or yellow and specially bred. My ggm was from Northern Viêtnam and lived mostly there with stays in France and southern China until the 1950s when my family left Indochina for good. I don’t for a second imagine she ate dog in France. I was 30 when she died and knew her very well.
That said, we eat horse etc and they can be part of the family too.

I was once told that there was a dog-meat butcher in Carcassonne, at one time.
What breed was considered “food” at the time, was not mentioned.

think the results are skewed because of hunting here being a very popular pastime in rural area. My non-scientific surveys says pet dog ownership is pretty much the same here as UK. Handbag dogs in town, real dogs in the countryside.

I dread the day our next door neighbour moves and we risk having someone with hunting dogs move in. This has happened to friends of ours, as new house built on a plot opposite them that was previously part of a bigger garden. And there’s nothing they can do.

was once told that there was a dog-meat butcher in Carcassonne, at one time.

My ggm was scathing about people who ate cat because obv as they are obligate carnivores they aren’t going to be nice to eat, n’est-ce pas. Dogs for eating are given an essentially vegetarian diet.
I have never eaten dog myself but I don’t see why eating pig should be OK and dog not. I’m a lot more concerned about the welfare of the creature rather than whether we should eat one rather than another because it has a sweet face, or whatever. Nobody feels sorry for chickens or poor old crabs etc.

Last Saturday night around eleven o’clock we heard voices on the road outside our house, but couldn’t imagine why anyone would be there at that time unless their car had broken down. However, the following morning our poodle began barking furiously as soon as she woke up and then we discovered two hunting dogs lounging around at the base of the cliff that is our ‘back garden’. They didn’t have any visible ID, so we left them there with water and food (Royal Canine, which they refused to eat) and we went off for Sunday lunch in another village. When we returned several hours, later the dogs were gone, and the following day we learned that they were from Maurs in the Cantal, about 20 kms away and their owner had tracked and found them with GPS.

They’d obviously found the dogs’ general location the previous night, but not been able to go any further; I wasn’t too surprised at the tracking of the dogs, but was very surprised by how far they’d travelled.

On a slightly different tack, I regard the hunters as necessary because there are too many sanglier around us and also I do enjoy the meat. However, on Weds at a local night market, I had the first sanglier of the new season and thought that it didn’t have the same depth of flavour as the porc noir that we buy every week. Mind you, neither compares with fresh warthog chops!

So sweet warthogs, such poor little endearingly ugly faces and so nippy on their spindly toes. And the tails.

However, their tusks are something else…!

However, their tusks are something else…!

One of my great-uncles had some tusks of warthog or other wild pig which had grown into a circle and were bracelets, I was fascinated by them, the cutting edge was super sharp.
But not as much as by his lovely paperweight which was a huge sedimentary stone he’d got out of someone’s bladder (actual not gallbladder).

I had a sculpture technician in my SA uni dept; who made stuning carvings of large SA insects out of warthog tusks, unfortunately he wasn’t allowed to sell them internationally because it’s classed as ‘ivory’. However, I did commission him to carve a (small) giant squid from a sperm whale tooth that was given to me by my paternal grandmother in 1960, some ancestor had been a whaler, and it took me thirty odd years to figure out what to do with that tooth. Very pleased with the result.

It is wrong, that is all there is to it. Skinning etc a sentient being alive or terrifying it etc is just wrong. Cultural relativism is bollocks and invariably used to justify appalling things done to people and animals.