Yes indeed but the release from the CEO was after the launch of the id3 I am sure and in response to a question on cost and the uptake of EV’s for average families.

It doesn’t solve the problem of whether to buy an EV now (and if so, which) or to wait.

It’s still something of a pioneer’s game and Tesla is not the only manufacturer with problems. Even if bits don’t fall off so willingly from ID.3’s they were beset with software problems.

BMW has been playing it a bit more cautiously - whether that is a good thing or a bad thing remains to be seen.

I’ve plenty of time to makeup my mind, even if I were set on the i4 the earliest I’m likely to see one is March-June next year. I could reserve one which might make it closer to March but would I then discover there hadn’t been much demand and BMW quickly start offering big incentives - the 745e presumably is not selling in expected numbers as there is a whopping £21,799 deposit contribution from BMW if you order one (OK that’s a PHEV rather than a pure EV but even so nearly £22k off the asking price smacks of desperation).

I’m waiting for something with the ground clearance, range and towing capacity of my Duster to appear on the market for the same cost of a new Duster.

Can you tow with an EV? Thought not, so perhaps no point in adding to your list for father christmas quite yet….

Our soon-to-be-ours EV has a nifty ski trap so can get skis, etc in the car as can’t have a roof rack apparently either.

But for us swapping to EV wasn’t a like-for-like decision. Years away from that I imagine!

The decision is always going to be a balancing act. Clearly, EVs will drop in price, but as they do so will government incentives.

Another factor is that the market will mature a bit & despite the general clamour for bigger batteries/more range there is every possibility that there will be future offerings of the same models but with differing battery sizes. This would allow for lighter & cheaper base models which will suit a lot of people’s everyday lives. Remember, average daily distances driven are almost always well inside the capability of even older EVs with smaller batteries.

Although charging infrastructure really needs to be vastly improved it’s really not currently a hurdle if you are prepared to do even just a small amount of planning.

Equally a lot of people’s daily charging/distance needs can already be met from a standard power outlet. Yes, not everyone can plug in at home (e.g. 40% of UK households don’t have private parking suitable for that), but a lot can.

There is a big charge coming to EVs in the shape of the Hyundai Ionic 5 and the Kia EV6 (effectively closely related cars).

To me these are game changing numbers, more info here: 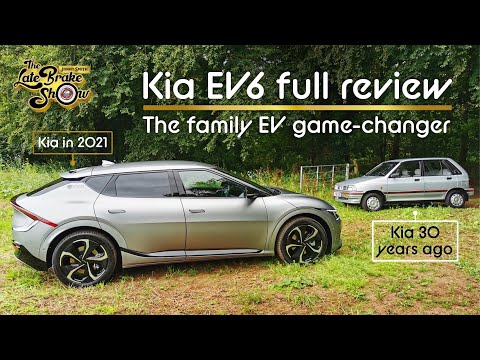 Can you tow with an EV?

Yes, you physically can (they make excellent towing vehicles), but not all models are approved for towing in all territories e.g. a Nissan Leaf can be used for towing in the USA but the same car has not been put through the approval process in Europe. This is to do with manufacturers being cautious & protecting the battery life for warranty purposes, but I’m not sure why they don’t do that in the states as well.

The old 24kWh Nissan eNV-200 is not approved for towing in Europe, but it’s new 40kWh version is. The basic vehicle for both electric models is indentical to the fully towing approved diesel version in terms of brakes, suspension etc.

…as can’t have a roof rack apparently either.

Roof racks; there’s no reason not to use one on an EV but (as with any car) it will reduce fuel efficiency. I have a good set of roof bars for my Leaf & have used them in anger without issue, apart from losing range.

Can you tow with an EV? Thought not, so perhaps no point in adding to your list for father christmas quite yet….

i4 will tow 750kg unbraked or 1600kg braked, and can be ordered with a tow-bar if you like

Impact on range - same as for an ICE vehicle with the same trailer - but that *will* obviously mean less distance between stops for juice.

I’m waiting for something with the ground clearance, range and towing capacity of my Duster to appear on the market for the same cost of a new Duster.

Duster is 8" Nissan Leaf as near as makes no difference 6" - is that 2" really going to make that much of difference?

There is a big charge coming to EVs in the shape of the Hyundai Ionic 5 and the Kia EV6 (effectively closely related cars).

Yes, the EV6 is interesting but the GT AWD version is not out until late next year (so possibly 2023 in practice). Sadly I can’t say I like the looks.

The Ionic 5 is interesting in appearance.

The non-GT EV6 7.3 secs 0-100kph which is plenty fast enough for me, I know the GT will be 5 seconds ish which is damned quick.

Can you tow with an EV?

No problem, once you’ve a towbar🙂

My lingering concern is that if there is a battery breakthrough then the depreciation on cars with the old technology could be severe.

As it is since most cars go, handle and stop pretty well electronics have become more of a differentiator between marques and models. The life cycle of a model is moving more towards an iPhone, back to the annual upgrades of US 1950s motor manufactures. I bought a Merc SL in 2001 and kept her for fifteen years or more and she never felt dated. The other cars I bought during that period did feel dated after about three or four years. I wouldn’t like to fork out for an expensive EV and feel my widgets were obsolete a couple of years later.

My lingering concern is that if there is a battery breakthrough then the depreciation on cars with the old technology could be severe.

But the same is true even more so of ICE cars is it not?

Not sure what you mean

Not sure what you mean

Just that if I buy a vehicle with an infernal combustion engine it might have zero value in 10 years.

Not that I expect petrol to disappear from forecourts in 2030 but it’s eventually going to be in the same position as EV charging is today.

Having almost got my Duster grounded moving over onto the verge giving way to tractors etc on several occasions, I think that extra 2” would make a difference.

Oh well, iX3 it is then (you might have me on price though

I wouldn’t like to fork out for an expensive EV and feel my widgets were obsolete a couple of years later.

With many EVs having mostly large screens rather than switches/dials I think this actually gives them plenty of scope to be update by the manufacturer.

With many EVs having mostly large screens rather than switches/dials I think this actually gives them plenty of scope to be update by the manufacturer.

iPace, Leaf or something else?

OK, yes I agree totally. I wouldn’t buy a new ICE now, though a hybrid with significantly better electric range than my Merc could be an option. It and the Tiguan, the two cars I use regularly, are just approaching four years old so I don’t think I’ll buy anything in the immediate future. Both have taken the initial depreciation hit and their trade in value will only drift down.

The Tiguan is a 240BHP model so i’m still smarting from the malus. I’d certainly never buy a pure ICE in that power bracket ever again. The Merc has 270 BHP between the ICE and the electric motor and it’s just a far more sensible “on demand” approach to power and more pleasant drive than “traditional” engines.