Just had some delicious mussels, from the North Atlantic apparently. I had never eaten them in the UK and only discovered them in Courseulles sur Mer in Calvados in 1975. I’ve been addicted ever since.
I’m not too keen on the big Spanish mussels for some reason.
I think I like all seafood having been weaned on shrimps, cockles , winkles and whelks on the east coast.
My top three ? Impossible question but I would probably go for …
Mussels
Oysters
Whelks.

Mussels are top for me, I think but razor clams come a very close second…

I like them too Angela along with scollops but I do think scollops are overrated, especially as they are quite pricey.

I’m not too keen on the big Spanish mussels for some reason.

Yes I cant stand those macho b***tards either

Never tried a razor clam…
Used to dive for scallops off Swanage.

I love oysters too, but not the fat ones you get in Brittany, they taste flabby to me. I much prefer those from Bouzigues, on the Med, which are smaller and a bit sharper in taste. Sea urchins, in season, are also fabulous.

oysters too… they taste flabby to me

Aren’t you supposed to swallow them whole rather than chew?

I’m sure that must be a bit of an affectation - why eat something so delicious if you don’t take time to savour its flavour? I once had a plate of 12 oysters, 4 each from three different areas all within10 kms of each other. The differences in taste were subtle yet perfectly clear, if you just swallowed them I doubt if you would have noticed. Anyway, I’ve always chewed them.

I love oysters but also recognise the view of others, less informed, who liken them to chewing snot

liken them to chewing snot

Totally the wrong consistency! Chewing seawater, solidified with a lot of gelatine, I think…

Indeed, many people liken it thus. Chaqu’un a son gout

This is how to accompany them for swallowing 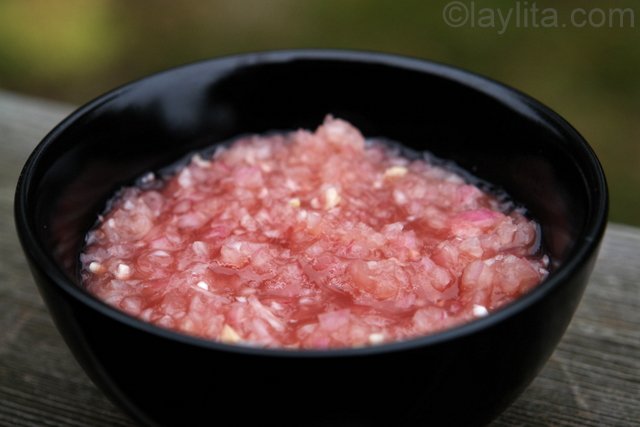 Easy recipe for mignonette sauce, a French shallot vinaigrette for raw oysters on the half shell.

Mind you, Brian, I could be just a wee bit prejudiced as my one-and-only experience of eating oysters was when I was a group of academics visiting Ifremer(sp?) in Brittany and we were taken out for a special seafood meal. We all went down with a horrendous bout of food poisoning and we were ill for a very long time… Put me off, for some reason…

Mussels are top for me, I think but razor clams come a very close second…

I have had months of having moules marinere 3-4 times a week, in Spain. A bag of about 50 ‘not-monster’ moules, from Galicia I think, costs about 2,20€ in my local s/mkt. Then, all of a sudden-like, I just stop. And start again some weeks later.

I haven’t had moules since moving to FR in Nov. I must have a go because I have found a wine in Lidl - S.A. Chardonnay Colombard - which I think will go splendidly. The fall-back is their Pays d’Oc Sauv Blk

I tried doing razor clams but clearly made a hash of it. They came out all slimy and 'orrible. I watched several YT vids but clearly need more practice/tuition.

Grilled lobster gets my top vote.

On location in Cornwall one time, we were stuck at Land’s End until the sun actually hit the horizon behind the Longships Lighthouse. As it was June, time was pressing to get this shot and back to the hotel - The Lobsterpot at Mosehole - before the kitchen closed.

I was sent to the nearest phone box to order 8 grilled lobsters over the phone. The hotel refused to take the order from guests not present in the hotel.

The drive back to Mousehole was one of the most reckless of my life. But it being about 21.20 on a June weekday, Land’s End - Mousehole was deserted.

As the party piled into the lobby I kept going, got to the restaurant, virtually deserted by now, and from the first staff I came across, “Grilled lobster for 8, please!”

There are/were two restaurants, one in L.A. the other in N.Y.C. that specialisd in just steak or lobster. I think it was called The Place. Both were famous for charicatures round the walls of the glitterati of those two cities.

To order a lobster one was told the current $/lb of a lobster and one ordered it not by weight but by cost. On the night, I recall it was $7/lb [1980 or so] My boss ordered before me “A $49 lobster please - and don’t any of you guys think you’re getting any of it!”

I went for a $24 lobster. This, as you can imagine, was bigger that any lobster I’d encountered in Europe. My boss’s $49 lobster was vast. Its great claws dangled over the end of the large slab of wood it was served on. Not even he could eat but a part of it. The guys who ordered staek all got some …

Next time we went there I ordered the smallest thing I could think of - fillet steak. It was still excessive.

In my flying days with a group of friends we flew in to Morlaix on a Beaujolais jolly and stayed with friends in Saint-Pol-Léon, right on the coast in the bay. A short walk down to the oyster beds Friday evening and back up the hill with carrier bags full of freshly landed oysters for next day’s lunch - cheap as chips! Our Hosts (retired restaurateurs from the UK) prepared the shallot vinaigrette from a shopping trip Saturday morning to Morlaix market - gorgeous. Fond memories.

Your reticence is quite understandable! I have no mission in life to convert the world to eating oysters, there’s plenty of things I don’t like. For example, I don’t like mussels - I’ve tried so many times, but I just don’t like the flavour. My bad luck.

Mussels are rather distinctive in flavour @Poquelin , as are oysters I suppose…

The standard waysof cooking razor clams do seem less than successful @captainendeavour . They’re one thing I haven’t tried cooking myself but there is a rather nice restaurant locally (currently doing take-aways) that does a superb job

That’s a key factor - having had them done properly, one knows what the end result is s’posed to be.

rather distinctive in flavour @Poquelin , as are oysters I suppose…

I thougth oysters were s’pose to tast of the sea, perhaps lemon and a little black pepper with an ‘aftertaste’ of champagne…

Exactly, although when talking to my hairdresser the other day, she said they were too rich for her (Mind you, I think the friend who was cooking them may have used a lot of cream - they stick it in everything here

But Brian, mussels can have very different tastes depending on where they are from. Some can be quite bland and need a vinaigrette or whatever to compliment them while others can be quite ‘charnu’ or more deeply flavoursome.

But to me, Peter, they always taste bitter. I’m told they shouldn’t, but they do. Maybe it’s a genetic thing. - I’m one of the 10% or so who can’t eat fresh coriander, it tastes of soap to me! So if I can have one genetic abnormality, why not two?