Food shortages - are you affected?

The first change was that there were big signs near all the trolley racks saying “Do NOT touch the trolleys - disinfected trolleys are available inside the store” - which there were.

Even fewer people than last week (mind you I do go at ‘apero’ time for that precise reason) and even more stressed looking check out operatives.

Everyone (bar the chavs) was carefully keeping their distance and this time the shortages were far more noticeable, as were the price increases, especially for veg. A cabbage was 3,99 - I paid 1.39 three weeks ago…

No toilet paper at all. Again!

And no flour at all. Again. Except some that had been decanted into 1kg plastic bags with a sticker added stating that it was the Intermarche own brand equivalent.

How is it with you?

I’ve bee trying to only go out once a week (every 2 weeks didn’t work, run out of/went off beer, fruit and veg). Our local Carrefour had almost everything, even bog roll (not much bread) but couldn’t believe the price of fresh tomatoes, cheapest was €4.5/kg

We are doing a shop every 10 days - which is pretty normal for us. Only problem is very small choice of fresh fish. Apart from that it’s been fine so far. I even got a sachet of liquid handwash on Monday (I am tall and it was at the back of the top shelf!)

Local Lidl had pretty much everything, so some ranges definitely reduced.
I wouldn’t swear by it, but dairy products seem to have gone up in price. Fruit n veg, similarly affected.
Toiletries too. Chicken breast at 5EUR/kg
Greek yoghurts were out, fish fingers were out (all those kids being at home probably), and a lot of frozen produce also not in stock.
Pasta was pretty much all out, except for more expensive brand.
Most of the soft fruit and veg was starting to go over - got home to find my peppers rotten in middle, last week, it was my bananas.

Flour (gateaux flour was back on Monday in Carrefour express)- pasta -eggs and for some reason cucumbers. Pretty much since the lockdown began. Everything else is fine

No shortages in our area. Done the weekly shop and as usual hit Bakery, Lidl, Leclerc and Hyper U as they all have favourites or stock different things like fresh coriander etc. Prices have varied I have paid as little as .99 Euro and as much as 2.99 Euro for a cauliflower, salads are pretty much the same and the meats/fish are expensive as usual.
Market day was well attended, but people formed orderly queues and patiently waited to be served.
Trying to compare this to the madness in the UK and the USA - I rather be in rural France just now.

No obvious problems at my local supermarket however, vegetable/fruit quality/choice is becoming poor. I hate frozen vegetables

True. Things like frozen broccoli can have a strange texture when cooked. I find that if I pour boiling water over it, drain it and then stir fry it it is less rubbery than when steamed.

No problems here, I went shopping this week for the first time in, must be more than 3 weeks to a month.
I popped into Lidl & Auchan. Lidl everything as normal, Auchan seemed normal too, but lacking in Bio flour & other flour they only had T45 & T55, flour being next to the pasta aisle I noticed that it was half empty, as for the fruit and veg looked normal but hardly ever buy as have 2 permaculture gardens. The fresh fish stall was half what it usually is. Shopping trollies inside the store were marked as disinfected.

Hey Lily & @almondbiscuit,
have you not a bit of garden to plant some broccoli? Plant now & eat after a couple of months until this time next year & more, easy & cheap as chips, no need to freeze as very hardy, you can crop it when - 10 out full of nutritional values not forgetting the taste ummm.

Thanks for the tip! I will have a go!

We have the disinfected trolleys inside the store thing now - but no obvious shortages.

Had to accept some alternatives, but the only real problem is bread flour. Shopping once a week is no problem if we can make our own bread. Local U has only ordinary flour, Leclerc website says “disponible bientot” but since they don’t mention a date I suspeect it’s just a polite way of saying "anybody’s guess. "
There is a small flour mill about 12km from here. Will check tomorrow to see if they can supply.
Otherwise we eat better than ever because Madame occupies her time trying new and exciting recipes.

We recently spoke about creating a small potager, but cannot decide the best/easiest crop?
Love broccoli so will start with that.

I’m really not enjoying buying food from my Intermarché rather than the local, open-air marche de producteurs (now closed). The restrictions seem so unfair, as all the stall holders were assiduous in their precautions, one knew exactly where the produce was from (no long international supply chain) and one was supporting one’s neighbours.

Since the restrictions began, we’ve felt unable to justify Saturday morning trips slightly afield to buy what we considered staples, but which are probably classed as unnecessary luxuries - possibly the best wood fired, pain au levain I’ve ever tasted (the loaves are over a metre long!). Also coffee lovingly roasted in situ in a beautiful copper and stainless steel 1950s italian coffee roaster.

Instead, I’m reduced to ordering online (just like when I lived on the remote coast of Cumbria and ordered online from London); today received a kilo of very high grade, single estate Ugandan coffee beans and a 250gm pack of green peppercorns. Although both were considerably cheaper than I could have bought from my usual people (and there’s the important word - ‘people’), I’m looking forward to paying a bit more again and being able to resume F2F conversations and relationships with these local artisans.

We did a big shop yesterday, hopefully sufficient for ten days. A few empty slots on the racks in Carrefour but none of the things we needed. No flour though, but we brought 8 kilos back with us from Ireland on the 24th. No shortage of toilet paper, though some trollies did seem to be loaded with a rather a lot of it.

Our potager has some way to go yet… 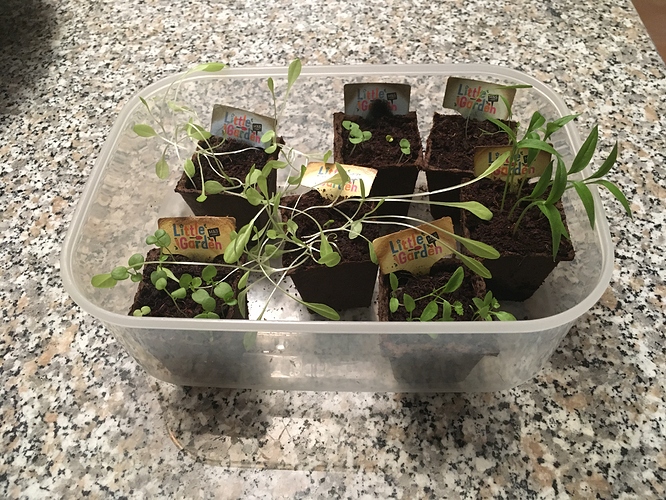 Broccoli can be temperamental to germinate, and you have to look after it for an awful long time…and like all brassica can be a pest magnet. Personally for a novice veg gardener I’d stick to reliable things like courgettes and french beans. Seed easily available even now, and both taste much better than you can buy.

Our potager has some way to go yet…

Yes, start one, very easy to do, I’ll give you some tips if you want, it’s not difficult rather easier & not as back-breaking as many people think. As with composting not difficult, I can demystify many myths. When I started living here in Burgundy I started a vegetable garden at the bottom of my land, actually dug up the 6’ of rubble that dated from the end of WW2 as one of the buildings had been blown up & the rubble was put at the end of the courtyard.
At first, a few locals said noting will grow, I planted lettuce, beetroot, tomatoes, onions, runner beans, french beans, sweeds, spinach, peppers, parsnip, raddish, carrots, chards etc. And all this without compost or any other additives. I had a bumper harvest and gave a lot to my neighbours. The locals said “c’est de la chance”. Maybe it was as I had no idea what the ground was like.
A few years later, I’d had my 3 compost bins in operation so I could mulch the ground strategically. This was the year when hardly anyone had potatoes or tomatoes they suffered from blight (they are of the same family). I had tomato plants 6’ high & with a full crop no blight, but my garden is high on a hill a no other gardens for 300m.
I’ve never told locals what to do in their gardens (though they have told me what to do toujours à cause de les maladies ou on fait comme cà ici)…

Thinking about gardening in SF land, it would be nice to have a post for gardeners of all sorts, new to it or not, sharing experiences & tips, veg, flowers, herbs, permaculture etc. I’m willing to put one up on SF if the admin can keep it clear of Covid-19, Brexit, politics of all sorts & of all sorts! Gardening & only gardening @james, @cat, @stella_wood

Was going to say the same.