I hope you can give some ideas for where to look for new blinds for our house. Years ago, at least 15, I found some wonderful white, almost fine linen looking blinds at Casa, you couldn’t see through but let in loads of light. I was near the house in the last holidays and they are still there! The were almost roman style blinds and could be easily raised and lowered, totally plain, no fussy bits. In short they were perfect! Of course they dont’ do them any more! I’ve been looking for years now for something I like for both the bedrooms and the big French doors at the front. I’m really struggling to find ones I like, I have got some up in our bedroom which are a mid grey linen look which is nice but they have a stupid ribbon system to open and close which is a total faff so they stay down!!

I’ve tried all the usual places for such things and have just had a very dissapointing look on line! Can anyone help me with where I could look?

matbe no one else knows either

Thanks! Very much the look I’m after but doesn’t seem to be able to be attached to the window itself (maybe a special word?). Also my smallest window when I put in the dimensions was 68€, And would need 2 per window !

Hello Tory. I have just done the blinds thing. I have three windows which face the sun and contrary to pop opinion, ‘Normand Grey’, a cheeky name for one of Farrow & Ball’s’ ‘paint for toffs’ is not what we have here week in/week out. In fact I have the blinds down now, 'cos the current is doing that thing …

There’s lots on Amazon. I went for white venetian blinds, 'cos I’m a bloke. A writer for The Independent spent a week as a cleaner in London and noted 1] All the blokes had venetian blinds - curtains too girly 2] Everybody had those large globular paper lampshades. [It was that era]

If a blind has brackets that attach horizontally [as opposed to vertically, as in a window recess] they will fit on the window frame. And I reckon they all do.

If by some strange quirk the blinds with which you have decided you cannot live without, you love them so much, you could fit them on a vertical bracket by first adding a batten to the window frame. This would bring the blind out from the window by the width of the batten, of course, but as far as I’m concerned, when it come to blinds and windows in France [as opposed to French Windows] that’s the least of the problems.

Rant coming — I have asked a French engineer, now retired and doing a lot of building on his gite, on his house, on his late mother’s house, “Why do all windows in FR [and ES and elsewhere for all I know] OPEN INWARDS!?” My friend said he had no idea.

It means that if you have a window cill, you can’t put anything on it and be able to open the window. In my case, my kitchen table is up to the window and I can’t open the window without sweeping half the stuff on the table onto the floor. The wind has done this for me - just the once. 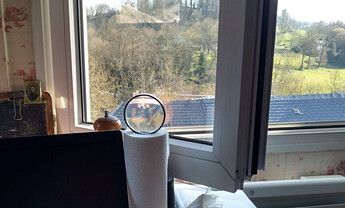 It means you cannot have anything like blinds or curtains AND have the window open. Well, you could if the blind/curtain is mounted on the window frame but that defeats the object of the exercise, don’t it?!

As these open-inwards windows do not have stays, you can’t have the window open a crack - esp useful at night.

This is the result of having the window open with venetian blinds fitted to the wall above. 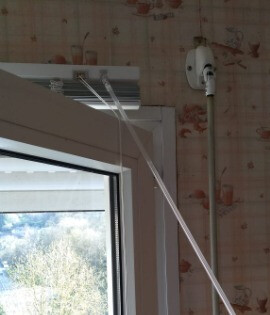 If the window opened outwards none of this would matter!

When I lived on the Med coast of Spain, the windows had massive roller blinds, slats of 19 x 25mm that rolled down over the window aperture and the window open on the inside. This makes sense in countries where keeping the sun out all day long but having some breeze into the room is the norm.

And the irony - or stupidity, more like - is that my windows had these massive blinds but the sun never shone on my side of the narrow alley! 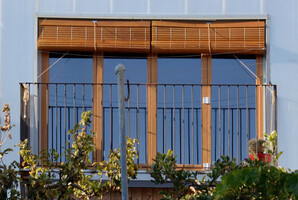 And of course being able to close shutters whilst the window is open. But that really only applies in climates of constant intense light and heat. It makes no sense north of the Loire, say. My engineer pal had lovely blue shutters on his gite [Manche] window 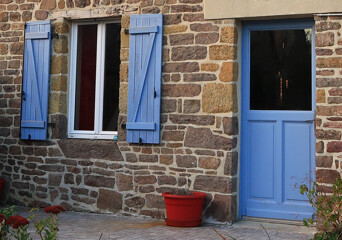 They had evidently never been closed! The paint on the ‘inside’ [ie what you see here] was peeling and the batten at bottom of the right window fell off with rot. The paint on what would be the outside when closed was as if painted last week!

Nothing to do wth windows and blinds but … the lovely blue door. That has been replaced by

Hi Tory, not sure I quite understand what you mean I know you are not a fan of Amazon, but something like this maybe?

I just googled store voilage fenetre and looked at images and there are a load for you to check out. Good luck.

That’s more the sort of thing I’m after, but again has silly ribbons you have to tie up so a pain in the bum! I’ll grab a pic of my current blinds to show you what I mean by attaching to the window. 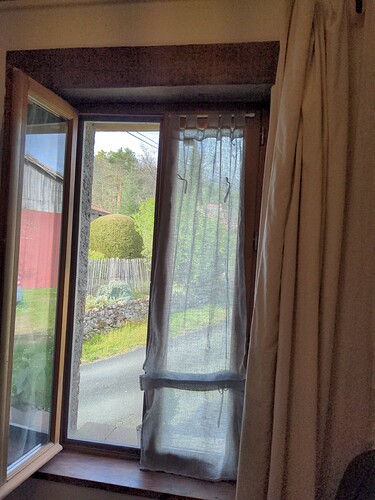 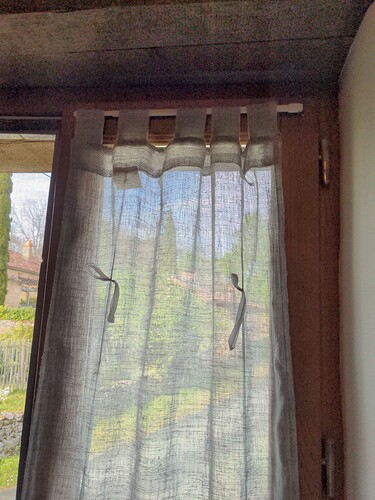 It means I can open windows, insert my fly screens ect without having annoying blinds in the way, like yours Chris it wouldn’t let me keep privacy / bright light out Those in our room in the picture are fine but I never open them as it’s a FAFF where if they had proper Roman blind system (as my old Casa ones did!) they’d be great!

I think the window thing is because of shutters. All older people close and open them everyday and not possible with outward opening windows! Also impossible to fit fly screens, although that is a mama dern issue

Why do all windows in FR [and ES and elsewhere for all I know] OPEN INWARDS! ?

Most of europe do it this way. Very much linked to different culture of living in the street, not shut up in your house surrounded by moth infested curtains and carpets.

A) plants and greenery go outside - all those beautiful geranium filled window boxes that you share with the world rather than a miserable houseplant you keep hidden away. Anyway if you have an inner window sill full of tut how do you hang out of the window to chat?

B) external shutters (used to) provide better insulation (heat/cold and light), and take up less space than inner ones.

C) try cleaning the outside of a UK window on the 5th floor…maybe europeans prefer cleaner windows.

D) Sash windows are not common, so far less risk to passers by to have inward opening windows.

The vendor behind this on cdiscount, store pas cher, seems to have a variety of options

That actually looks like it might be good!!! I’ll have a proper look on the laptop later but seems to have a small rod through it at the top which is what I need to attach to the windows themselves! Thanks Karen

Toryroo, have you looked in your local tissuteries? . We got rods from them that used hooks, stuck to the frame and some that had metal feet things, that sat inside the frame held by tension. Sorry, I’m not explaining it very well at all, but I think they’re what you’re looking for.

All our roller blinds came with fittings to clip onto the window themselves or the frame, so they stay with the window when open. 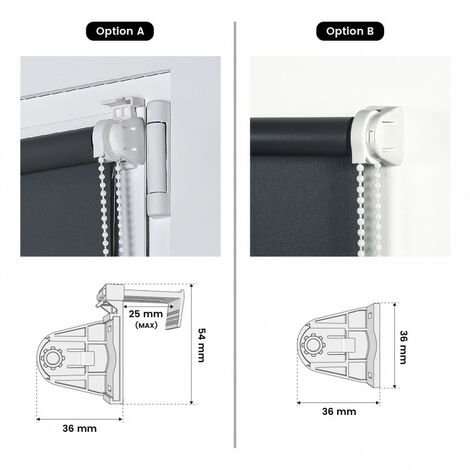 Tory this gives you a better idea/view.

Also to give us a bit of fixed ventilation, we use these. 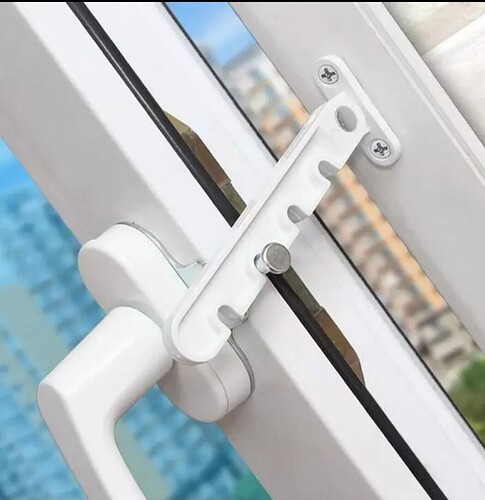 Thanks Debby and Colin