How to get rid of dormice/loir

If there is anyone who has had dormice (loir) running around inside the walls of their house, would they
please tell us how to get rid of them humanely.

We have never actually seen even one, and if they do not do any harm it is okay, but we’ve been told
they eat the electric wires etc.

Sometimes they make so much noise we think they are rats, but apparently the dormice/loir do make a racket.

We live in the mountains in the country and our house has been renovated with lots of plasterboard in various rooms.

Have you actually had any problems with your electricity? Loirs are protected, Lérots aren’t (they are another sort of dormouse) and mice certainly aren’t - if ‘they’ are running in the walls ‘they’ are probably mice, Loir and Lérots tend to run under the roof rather than in the walls, they hate to be near the ground.

I have all 3 in my very old house and have mousetraps at ground level for mice, the loirs and lérots haven’t done any damage in the 20 years they and I have lived here, I expect they have lived here far longer than I have, when I moved in I found a nasty 19thC cage trap with a poor little dried out corpse/skeleton in it, barely identifiable.

There are little plug-in ultrasound-emitting machines which apparently make them move out. As a double bonus spiders hate them too, a friend of mine has them - they don’t seem to have any effect on dogs and - in her old house - are very effective.

Thank you, Veronique
No, not problems with electricity. We have never seen these animals. Just that a couple of people have
heard them and said ‘Loir’. They are not only in the walls but between floors which is where they were crashing about this morning prompting me to ask for advice.

I will get some humane traps and see if anything happens. Maybe it is mice. Will get some plug in ultrasound machines also.
Thanks,
Karen

get a cat - rodents don’t usually like to hang out where a predator is present. even if they live in the walls or the roof.
should they decide to come out of hiding, a cat will be disposing of the offenders.

IIRC current electric norms require all wiring t be contained in gaine which is poisonous to rodents.
The same applies to the sheathing around the wire itself.

Just don’t ask for a piege pour lérots, since they are a protected species! The problems we have is not them eating the wires, but making a huge mess of the insulation. Luckily when we had some it was just as we were doing some work on the roof and that disturbed them and they scarpered. Round here people trap them with tinned sardines for bait, and rehome them in the forest far, far away.

We’ve got grey mice living under our terrace. Probably loir. They were coming in at night and eating the fruit. My husband has now tucked steel wool around all the pipework to block the holes. It seems to be helping.
You’ll know if they are loir come October when the noise will stop as they hibernate. We never hear noises in the loft but there is evidence of some sort of mouse and our insulation is so thick we wouldn’t hear them. Sometimes at night our lights flicker and my husband jokes that something is chewing the wires, who knows.

If you are keen to eradicate the problem these traps work very well:

If you are keen to eradicate the problem these traps work very well:

There are little plug-in ultrasound-emitting machines which apparently make them move out. As a double bonus spiders hate them too, a friend of mine has them - they don’t seem to have any effect on dogs and - in her old house - are very effective.

The little ones are a total waste of money. A mouse (bad attitude

) did a dump right beside it

as if to give me the finger!
The much larger industrial versions do work!
I have closed off most holes and eves with stainless steel rodent mesh which has workd well so far. 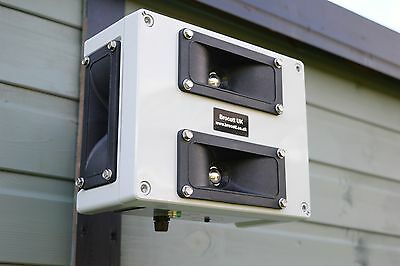 . Bird repelling may be less effective if your neighbour is deploying bird feeders. The devices produce a very strong, pulsating and aggressive ultrasonic sound that is not audible to humans when set on higher frequencies.

I wonder if ultrasonic repellers are disturbing to dogs?

Not had that issue or with cats with these rodent tuned versions.
I did get called out to silence one a resident had bought to drive off foxes which it did really well but dogs were howling, being sick and also cats trying hard to get away from the sound some distance away. That even effected me as I got close.

We’ve been using electric gadgets here for the past 20 years and we used them very successfully in the UK for many years before that.

I think there may well be various sorts. We know our ones do work - we’ve seen the mouse trying to escape the “sound/whatever” when I switched one on without realising the mouse was in the room. The mouse went frantic trying to dig its way through the floorboards to escape - made me feel a right heel.

Oohh, that’s made me feel a bit queasy and put me right off the idea!

Jane, we have one in the attics and one in the cellar. That stops them coming in. they can simply turn around and run out again.

Back in the UK, the poor mouse was already trapped inside the room. I did turn the thingy off and helped the shaken/disturbed mouse outside and across the road into the fields - where he scampered away… so no harm done.

Oohh, that’s made me feel a bit queasy and put me right off the idea!

Rap music has the same effect on me, it’s not permanent damage, if I hear rap music I don’t go in

That’s a relief…I get a bit pacifist and anthropomorphic about animals apart from mosquitoes, wild boar and jellyfish.

Jane I have qualms about swatting flies. Basically, I would rather not kill, squash, exterminate etc anything…

@Rob_le_Pest is the guy to speak to