I wasn't expecting that

Is this why they call it slapstick 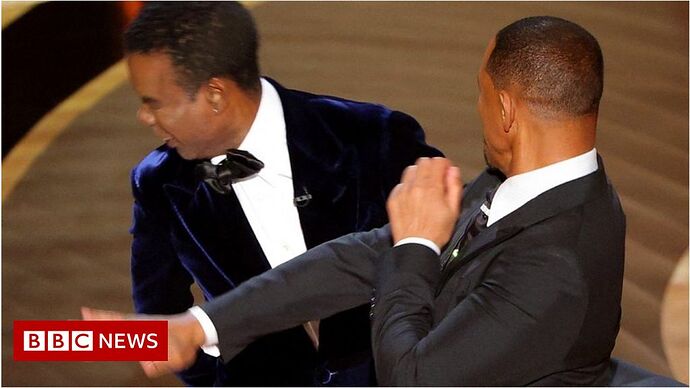 The Oscars halted momentarily when best actor winner Will Smith took offence to a joke by Chris Rock.

Did anyone work out what the joke was and why it was offensive?

Did anyone work out what the joke was and why it was offensive?

His wife Jada is suffering from alopecia so her lack of hair is not a fashion choice - the “joke” referenced her bald/semi-bald state in a derogatory fashion.

Shows how on the ball I am! A) I didn’t notice she was follicly challenged and B) the so-called joke didn’t mean anything to me in terms of hair.

It’s a bit of a Hollywood in joke, with Demi Moore in the original GI Jane having her head shaved. Something of a throw away comment for most of us.

But she was obviously quite upset by the comment.

Quite reasonable that she would be, because it was very pointed.

Comedians on this sort of jolly always seem to want to hurt people. Chocolate starfish, the lot of em.

It was a silly remark but then that’s Chris Rock. The response by Will Smith was emotional.

What perhaps needs thought, with all this current strident defence of “free speech” is where there should and must be limits. Does saying whatever you wish, regardless of how and in whom it lands still take precedence over its impact on others?

It used to be that social etiquette, religion and other controls reigned in what was said. Words still matter, even in these days of online anonymity.

I cannot think that everyone’s right to insult or utter incendiary statements should ever be given a free pass.

Chris Rock’s joke, however facile, hurt the courageous Jada Pinkett-Smith who had put in a beautiful dress and proudly accompanied her beloved husband on his special night. Did she cover up with a wig? No, not this proud lady. She may not have needed G.I.Joe jumping to her defence but I can’t help feeling she will long remember such a knight.

I have never understood why Ricky Gervais has never had his teeth punched out for his putrid juvenile hurtful comments when comparing.

That’s always the danger when you have a dig at someone’s OH, you might just get a knuckle sandwich in return.

If you ever listen to LBC you will hear plenty of people courting a knuckle sandwich being given a platform that shouldn’t be.

“Freedom of speech gives us the right to offend others, whereas freedom of thought gives them the choice as to whether or not to be offended.”

“There is freedom of speech, but I cannot guarantee freedom after speech.”

I always wanted someone to invent PoIP (Punch over Internet Protocol) as it would make the internet a much more polite space.

I appreciate this is a very un-French view.

Having delved just a little bit… it now seems that there has previously been antagonism between Mrs Smith and the Comic… and she boycotted one “do” which the Comic was at… and this is not the first time the Comic has made her the butt of his jokes.

In my view, a person’s illness/medical or physical condition… is not something for another to make light of… or to make a joke about…

Personally, I would never say or do anything which I thought might hurt/upset the other person. I rather suspect that the Comic knew exactly how his joke would hurt her and he chose to do so in a very public way.

Because he is funny…!

Because he is funny…!

That is firmly in the realm of subjective opinion

However, I don’t think “humour” which relies on the discomfiture of others is subjective - it is objectively bad.

As Billy said that’s a subjective opinion.
I don’t think he is funny and never have, I have seen him live twice because my late wife was a massive fan, the last time we saw him he was just crap and abusive to the audience, she got up and left half way through because she didn’t like what she saw, so did a big part of the audience and he died on his feet that night, he is an unfunny dickhead in my opinion.

In my view, a person’s illness/medical or physical condition… is not something for another to make light of… or to make a joke about…

Agreed. If they make light of it themselves, that’s altogether different.
I like Will Smith and it may not be politically correct to strike another human being these days but it looked to me like a slap, rather than a punch and I say good for him. Maybe Chris Rock will find other ways to be a “comic” than by being abusive about another human being.