Impots email "you've not declared yet"

Hi all
Has anyone else received an email re Impots declaration and it notes ‘they havent yet received yours?’
My initial declaration was 4 May 2021
Realised later I hadn’t added our new internet bank account so had to go back and re do that part only, 19 May.

Hoax or a Glitch??

Neither.
Provided you have already filed and had the confirmatory email from the impôts you are all set.
They seem to be using a scatter-gun approach, not targeted emails and SMS. It can be quite concerning but I guess someone made the decision just to send the reminders out whatever - cheaper than la poste and employing someone to write the software to trawl the fisc databases (which would probably be out of date anyway by the time the bot hits the “send” button…
Other expat sites (FB) are also full of this concern and the answers being given there are the same.

Provided you have already filed and had the confirmatory email from the impôts you are all set.
They seem to be using a scatter-gun approach, not targeted emails and SMS.

That does re-assure me then Graham, having twice had a confirmatory email, I began by ignoring these ‘reminders’, but as they continued to flood in it did become a bit worrying.

If you hover over the links you will see they are genuine.

Further, if you look in your account, you will see the pdf summary of your submission which is absolute proof your return is registered. 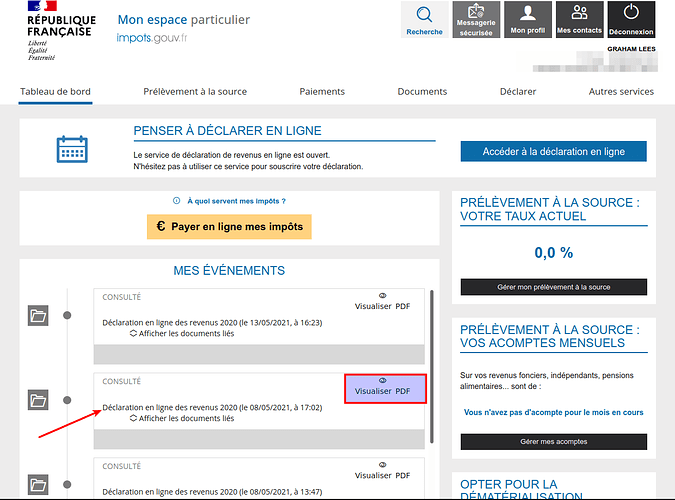 If you hover over the links you will see they are genuine.

Oh yes, I am a frequent hoverer these days and I know these were genuine, which is what made it more worrying.

I still haven’t done mine - is it Friday the date

I’m getting texts and emails but I haven’t actually done it yet!

Depends where you are and if you are declaring on paper or online: 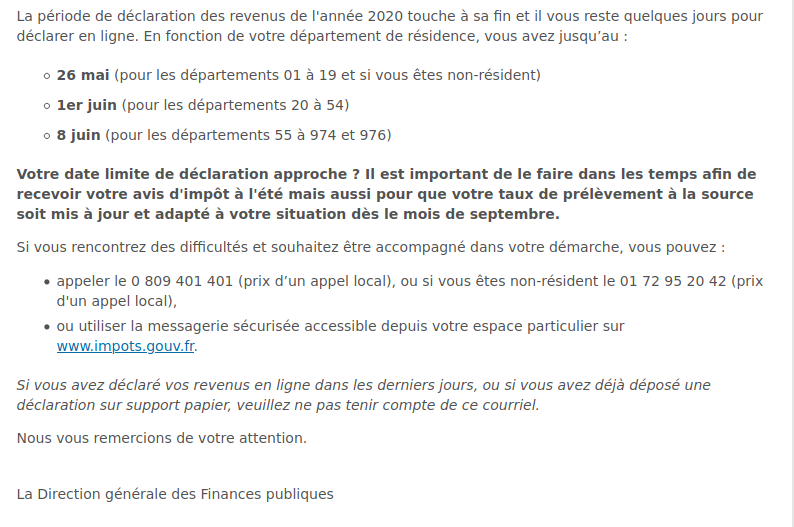 Haha reminds me of a trades union march in London 40 years ago for NHS workers. The banner read something like this "1% of nothing is nothing. We want 10%!! "

Thank you Graham Lees
I did do all the recommendations, if only to reassure myself that the extra account info had gone through!
Due to health checks (non C19) I was behind my usual timeline to declare though was within my 03 Depts date. So phew another year done😊

I’m now starting to worry about NOT getting these reminders

I’ve had two SMS and one email - all saying the same thing which is “don’t forget to send in your tax return unless you’ve done so in the last few days, in which case ignore this message”. Since I have completed the online site and I have PDFs to prove it, this either means they are totally incompetent or have the money to waste on trivial messages.

this either means they are totally incompetent or have the money to waste on trivial messages.

No so imo as I said earlier in the topic.
The cost to sending out emails particularly to a wide audience is minimal and it’s what any responsible Govt would do in order to remind the widest possible audience of an impending date limitation.
Tax filing is an important duty of the populace and I really do think that the French Govt are handling it responsibly.
Imagine the outcry if all speed limits were changed to 50kph and no signs or notifications were given of the change but fines start rolling in to people’s letterboxes - pandemonium!
It’s all about mitigating the costs of necessary communication.

I’m feeling left out too😢

Glad I’m not the only one or I really would be worried!

So why send TWO SMS and an email ? Oh, never mind.

You obviously got mine, John