Keep fingers crossed… only projections so far… so far… 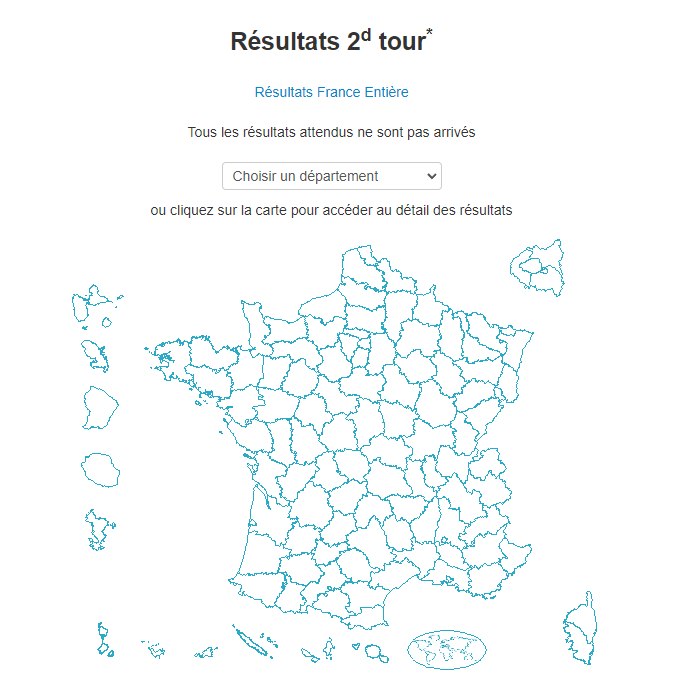 Awful, 89 seats!! And this means that corrupt and evil woman will get funding. And her disgusting henchmen will get positions of some sort (those who are not in prison of course).

Plus the fact that they are probably going to be more united as opposition that NUPES even with fewer seats.

It is a nasty sting in the tail, for this to happen after all the worries over the presidentielle and then great relief which now seems to have been premature.

Slow government for the next 5 years? I like slow.

It will be interesting to see how Macron forges alliances and makes comprises. It’s not going to make for any easy path but that’s not a bad thing. A bit of critical evaluation along the way often helps.

The problem I see is that there will be a lot of division and a lot of civic unrest. Slow progress yes but not in a calm peaceful way.
And I think this is a time when progress is needed, France has problems that need solving quickly. Notably but not only the health service.
You cannot forge alliances with parties that do not want an alliance because it is to their advantage to fuel conflict. Will Macron even survive the term? and if not, who next - well we probably know the answer to that.
Sorry to sound so negative but I am on a downer over this today.

'tis true, I was trying a positive spin. I see the most likely alliances, either formal or ad-hoc, as being with LR, despite some already ruling this out. Macron will never agree with RN on anything, ever - and vice-versa. Nupes might be dividable but Mélenchon has seemingly the aim of simply frustrating whatever Macron wants (not a particularly helpful position imho) So there’s an element of ‘rock and a hard place’ for Macron leaving LR as about the only workable option.

I think Macron is pragmatic though, and I do think he’ll find a way to press on, albeit at a reduced pace (not that much happens quickly anyway!)

Btw, colours on the table, I’m a liberal leftie. An old school socialist even. My natural home might be PS in France but I’d probably go ecologist/green at the urn - not that I can vote, so I’d do more research on it if I could. My point is, I’m not a hardcore supporter of Macron.

Macron absolutely has to ally with the Union Populaire and undertake radical change. If not, I fear he will continue to strengthen the extreme right, and ultimately propagate social breakdown.

Meanwhile, both leading candidates in the Colombia presidential election yesterday were at the political extremes - it was won, just, by the leftist, a former revolutionary guerrilla; his right-wing opponent once described Hitler as a “great German thinker”.

Wow, that’s a very dark prognosis from our resident expert - Surely “Absolutely has to” smacks of defeatism in the face of an understandable change in French politics after 4 stagnant years with our little Napoleon. You seem to have a blind spot when analysing the impact of the 89 RN sieges in the new assembly - RN are the second most popular party in France with millions of citizens supporting Marine Le Pen rather than Melenchon. Mind you if it’s not in the Guardian it doesn’t exist. 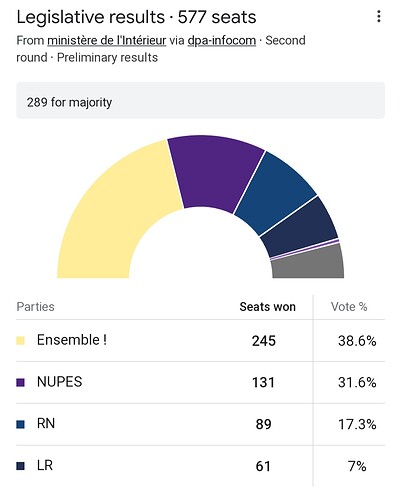 @M.Apples Are the Nupes not the second biggest party? Or are you dividing that coalition into four?

Either way many more people voted for Nupes than RN unless the heat has got to me and I’m not reading the results correctly.

Are there particular aspects of Le Pen’s policies that particularly appeal to you and which of these would serve France well?

Do you consider that both RN (minus the racism) and the left offer a viable economic policy to Macron’s liberalism?

Also why shouldn’t Geof have an informed opinion? Tell us more about yours rather then making snide remarks?

Putting aside the always interesting difficulty right-wingers have in resisting the personal attack - and indeed the fact that the Union Populaire actually got about twice as many votes as RN - I’m confused as to what ‘blind spot’ you are referring to. The point I made was that voters have either given up, or moved to both extremes, of left and right.

Do you think they have only moved rightwards? In that case you need to explain the very similar % of votes achieved by both the leading left and right presidential candidates, as well as yesterday’s results.

Moreover, my real point is that this has been happening all over the world. You could make a case - for instance in Germany - that the centre-left is very lately reviving - but personally I think it’s a very thin case.

But I do really feel there are ‘dark’ possibilities (although I think I’m more optimistic than, say, @vero ).
Two almost certain effects of climate/ecological breakdown are social disruptions of various kinds, and increased immigration.If our politicians don’t urgently address these issues - through real, economic changes - they won’t be able to stop the extreme right using them for genuinely ‘dark’ ends.

Please explain these “genuinely dark ends” for us lesser mortals who don’t read the Guardian;

We are constantly told how ‘politically aware’ the young of today are yet when it comes to expressing their awareness in the most basic way ie voting they go ‘AWOL’ and this was apparent again on Sunday.

Macron put self promotion first and barely campaigned for his party which is why he now doesn’t have a majority and without that he’ll struggle to get anything through parliament, standby for five years of arguing and striking when the country badly needs stability.