Logs - now is the time to order

We just know that the amount we buy ends up as a stack of 17m, the length of our wall.

We stack ours as quite a deep double row (takes ages) around head height and the length of the barn wall and then measure it length x depth x height just to check and our 7 steres which the farmer we buy off measures it by has always come out at about 7 cubic metres more or less so we’re happy with that!

We were very pleased this year that when we rang up, he effectively said “ah yes - the usual?” so he knows us and knows he has no trouble with us and that’s worth a great deal in relationship terms…

I was always confused about the different terms, and in any case we only ever asked for a load. He delivered 1 metre lengths on a trailer chassis that was 3 metres long with a stack of 1 metre high. As was ours, they simply drew alongside and transferred the whole lot straight across.

Only once did I order cut logs and he delivered with a tipper trailer in a great big pile. Took us (she could actually do things in those days) 3 days to stack it all, mainly because it had to be tipped where we wanted it stacked. Tricky. Thus I decided that, hard though it became transferring barrow loads closer then cutting in half, that was a better prospect for the future.

I think that the last load we had cost € 150 for the 3 cu.m. For several years before that it was € 140. At 3 loads per year it was more expensive than the extra cost of our air to air heater. Even more economic now that we have a 2nd heater in another room because we have no internal doors (other than bedrooms and bathroom) and the one alone operated far longer than the current 2 as it struggled to heat beyond the room it was in.

We always planned to keep the wood burner as a back up in case of electricity cuts (never again as long as the 3 weeks after the Grande Tempete of '99) but in fact we have only had a fire twice in 5 years, and that not for emergency but nostalgia.

I haven’t even bothered to sweep the chimney for at least 3 years.

I can get 2 stere in my trailer, I’ll be with you shortly.

Can you explain the 15kw insert? Is this kind of like a back boiler? I am thinking of how monster a fire would have to be to generate that much, is it to batteries?

Sorry for idiot questions. But if you’re going to have a fire sounds like capturing every bit of energy from it could be a good idea.

I think its heat output

Can you explain the 15kw insert?

I think an insert is one which is fully fitted into the chimney (as below) - whereas a log burner has space around it: 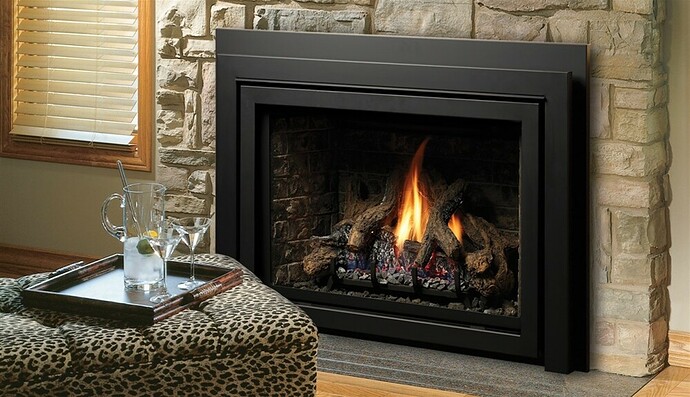 15kw is the heat output - and 15kw is high output. Our normal sized log burner is I think is 8kw. We also have a tiny one in our gite which I think is 3.5kw.

Important to get the right size for the job you are doing.

Seconded! And the way the house is laid out makes a big difference. Had we been able to put our in the centre of the house it would have heated the whole thing. As it is it can only heat half.

Had we been able to put our in the centre of the house it would have heated the whole thing. As it is it can only heat half.

That is exactly how we have ended up with 2! I’m still convinced there must be somewhere we could put a central one instead of one at each end!

I think we are likely to get through 1 and a half this year! So 20 does seem a lot to me!

I know our stove is efficient but I don’t think that is it!

(house is very small and 17°c would be considered tropical!)

Hello hello, tied up with working all day. I’m probably overzealous with 15kw. But it’s something like that. I’ve an open mezzanine so it heats a big open space. It’s double sided design insert. On the odd occasion I’ve overstoked it and gone off somewhere (garage…) the heat output is phenomenal and scary. As I have underfloor heating via heat pump it’s not the primary source of heat and I run it with a few logs at a time more at the weekend. They are much more efficient than an open fire. Then you have to burn decent quality properly aged and dry wood.

Of course a lot of the variation in posters’ needs is due to where they are and the age / lay-out of the property, rather thansimply its size. Also perhaps whether or not their OH spent most of their life in sub-tropical Durban (though this does enable me to joke about her wanting to wear two parkas at once in winter).

We (in the Aveyron stretch of the Lot Valley) have heat pumps in every room (courtesy of previous owner) but they’re seldom used because we have a 9kw poele whose heat is conducted through our three storey stone walled mediaeval house and 5 stère gets us through the winter.

However, last weekend we visited a neighbour who has a much grander property of similar age, with two vast fireplaces, that are nearly 2m high . Without a retinue of servants, the house is uninhabitable from October to May, so our friend has a (much smaller) winter home on the Cote d’Azur.

Out of interest how?

The ground floor and first floor are two long rooms (c. 12x5m) connected by an open staircase; the second floor has similar area, but is divided into two, separated by another staircase. The poelle is on the ground floor and its chimney is enclosed within a c.0.5m conduit that conveys heat to the upper floors. Also convected heat rises through the house via the staircases and there is ducting and a ceiling fan to draw heat through to the second floor bedroom furthest from the main heating duct. Since installling this system four years ago we have never needed to use the heat pump in our bedroom.

This is something I have considered - our bedroom is directly above the lounge where the stove is - I am interested to know if it is possible to put a vent in the ceiling and in the floor directly above - or is this daft for fumes etc?

No, I don’t think it’s daft, as the vent (presumably) would be from the room rather than the stove, so fumes should be minimal and it’s a really easy thing to do - if there’s a hole in the ceiling, the heat will rise through it So, it should be quite simple, but I was amazed by how well our system has worked

a vent in the ceiling and in the floor directly above -

it sounds a bit like something Del Boy would think up…

or is it one of Baldrick’s cunning plans…

is it one of Baldrick’s cunning plans

Not the first time…….

Yikes! I’m guessing very large, old and drafty house and you like it hot???

I am interested to know if it is possible to put a vent in the ceiling and in the floor directly above - or is this daft for fumes etc?

When we moved in here we had a very strange metal spider web cover (ex owner was a welder - we also have a huge horrible butterfly balustrade in the entrance still!) over the log burner going up into what is now our bedroom. We have built it into a box thing so that there is a door on the wall into our room that we can put a door on for sound / heat management. I can take a pick if you want. I don’t notice any wood smell in our room (although not had full fires yet just the odd ones burning rubbish - which to be fair are often smellier!)

1 and a half this year

That is very small, are you sure you are talking around 1.5m3??? And not the measurement where you get 4 of those???