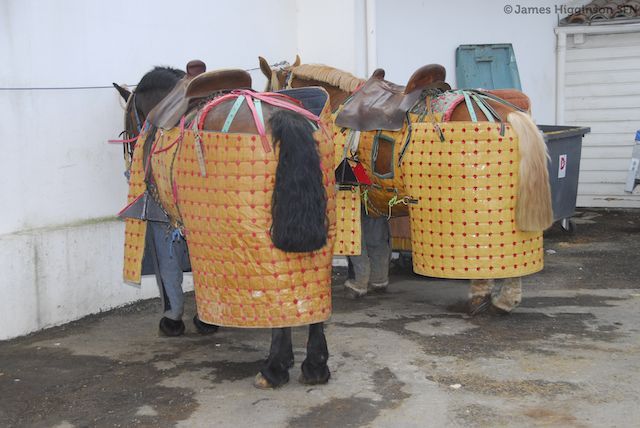 A man has been left fighting for his life with serious head injuries following an anti-corrida protest in Rion-des-Landes in south-western France last Saturday. These injuries were not caused by a matador failing to dodge an angry bull, but were as a result of police and event organisers intervening to remove protestors from the arena, injuring more than eight people in the process.

Bullfighting can trace its roots to prehistoric bull worship and sacrifice, and in the south-west of France is heavily influenced by the Spanish tradition, known as "corrida de toros" (literally running of bulls). It is deeply ingrained in the culture of many societies. Ernest Hemingway's take on bullfighting (from his 1932 book Death in the Afternoon) was: "Bullfighting is the only art in which the artist is in danger of death and in which the degree of brilliance in the performance is left to the fighter's honour."

With the Spanish authorities clamping down on bullfighting, the spectacle has become increasingly popular in southern parts of France. It is not clear whether or not the bulls were to be fought in the Spanish style with swords and lances, but the spectators were indeed treated to a fight. Over 60 members of the animal rights groups CRAC Europe and the Brigitte Bardot Foundation arrived in Rion-des-Landes and fighting broke out when police and bullfighting organisers intervened to remove them from the arena. Allegations of brutality and threats of legal action have poured in from all quarters. The family of the seriously injured protestor have threatened to press charges with the vice-president of CRAC Europe backing them up and warning, "we have photos”.

Brigitte Bardotte, France's most famous animal rights campaigner, weighed in and blasted the police for their heavy-handed approach, condemning them for the "brutality and savagery with which law enforcement and certain [bullfighting] aficionados attacked anti-bullfighting protestors...”.

The local town hall is not taking this lying down either, with the mayor of Rion-des-Landes, Joel Goyheneix claiming the protestors were insulting and provocative, and their violence and hatred was marked. Local police Colonel Fabrice Spinetta condemned the protestors themselves for being “very aggressive” in their actions, and the deputy mayor, Bernard Dehez (one of the organisers of last Saturday's bullfight) also joined the fray and announced that charges would be pressed against the protestors, accusing them of “offences against public order and destruction of property,” as well as “being a nuisance to our show, which led to financial losses.”

Was the police response disproportionate?

Is the treatment of animals in this way acceptable today?

Should ancient traditions such as these be left alone?

What do you think?

I took these at the Fête de Bayonne, this bull was let into a large enclosure where thousands of people have paid to get in to. Clearly very scared by the noise and bating of the crowd the bull runs amok for a few minutes. He is then corralled back into the pen whilst the fire brigade stretcher off the injured.

On his way in to the enclosure some daring morons are lying on the ground directly in front of the gate! (Click on the image for a larger version) 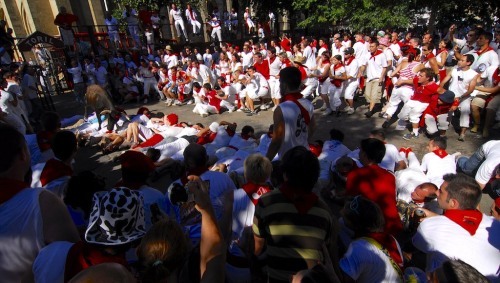 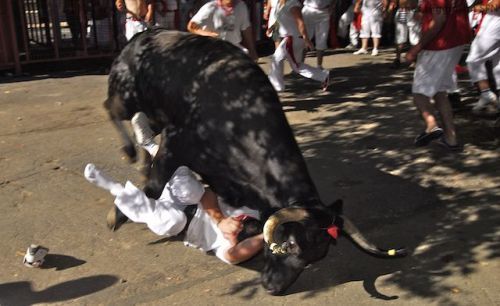 This is Course Landaise, where the animals are not stabbed, they are antagonised by the matadors who are in control of a rope attached to the horns so that they can control the beasts movements. ![](upload://mQzvoORahVT8Lv5gQU7dz6x3L9G.jpg)

One of Cabrel's best songs, Johnny, and says so much. yep, Brain, cette danseuse ridicule says it all. The lyrics are very hard hitting.

I'm clearly missing something here - why on earth would anyone want to watch an animal being chased into the sea?

Perhaps I should act on the earlier suggestion and pop off to a museum to 'learn' more - there might be a cock fighting exhibition too - or maybe interactive badger baiting....!!

Yes Johnny, "cette danseuse ridicule..." if I remember the end of one line.

Bull fighting should end as should any "sport" (and I use the term loosely...for me it is not sport) or "event" that torments any animal. If man wants to fight with spears and put on a show, then let him do it with another man.

It would be more civilised to ask for legally sane volunteers to participate in gladiatorial combat than to continue a practice where people stick spears into the neck of a bull then torment it as it bleeds to death. At least the gladiators would have chosen to take part, and I'm sure the combat could be praised as equally honourable, skilled etc.

Nice one Vic. As one might say, the TV station made a bit of a 'bulls up'.

Clare, you are close to the problem within. A large part of the reason these things are and survive is because of the attitude of the human as the superior being with control over all else. Sadly, and I suspect Norman may join me, this is one of those things where one might justifiably say man over nature, since it is often part of the hallmark of those who need to prove masculinity, power and often, as in the case of the Rion mayor and deputy mayor both saying the protesters are wrong, full stop, inclusive of the economic comment about 'economic losses'.

I agree with you Norman about not visiting and putting money in to sponsor such barbaric activities but, there are obviously more than enough sicko's to keep this sport running financially. But also just take a look at the armour the horses have to wear to stay protected!!!! Do you think if they had the choice they would get in the bull as well???? It's just unnatural.

'Torment is just as cruel' that should read.

Margaret, rarely do I read such a load of tosh such as you have posted. Cruelty does not necessarily have to include blood (although you sound as if that is something that would add to your pleasure?)

As others have loonted out troment is just as cruel.

For those who spout that no-brainer Hemingway, with his patent problem with his masculinity as do all these armchair/stand seat heros, well it is pathetic to see such a bunch of sad-sacks still trying to look macho in the 21st century.

Best option, although obviously one with which you would not agree, is to never visit these towns or spend any money with them. The economic route is the only one that will make any sense to these Neanderthals.

None of the systems used are perfect. Foxes are very rarely a threat to sheep, even lambs at their youngest. My 'neighbour' (well there was a churchyard then a field between us) in Cambridgeshire was both master of the hunt which I vociferously spoke out against and chairman of the council on which I served. Professionally he reared polo ponies and Suffolks, which is breed of sheep used mainly for its fantastic meat. That aside, as neighbours for many years we were privately good mates. He would have been the first to laugh at the notion of foxes being any threat to even new born lambs. Sure they scavenge afterbirth, stillborn and otherwise dead lambs which nobody really minded too much. Otherwise, as one knew, foxes rarely even took the locally common hares because they are too big as prey.

Anyway, that is a diversion away from bullfighting. Justifiable controls, such as the badger cull you think is right albeit that in defiance of scientific evidence, are fine if they can be justified. Hunting, fighting and other 'sports' that give participants and spectators pleasure are toward the perverse side of human nature.

Brian, since the outlawing of hunting with hounds in Scotland more foxes have actually been killed using the system whereby hounds flush to guns.

Hunting on the fells in Lakeland can hardly be called a toffs sport, and is necessary to protect sheep who live nearlhy all their lives away from the farm. If it weren't for the sheep, we would not have the Lakes as they are today, the fells would be covered in scrub.

Hear, Hear James & Bruce. The torment is just as cruel. Do you think if the bull could speak he would love play such horrible human games.

There is of course the veterinary take on this, that mammals who are used for all forms of 'sport' suffer mental health problems thereafter and often need to be put down. Just do a bit of web searching and read about that and then continue to justify the corrida in any form. Like James, by the way, I do know the difference. Death in the Afternoon which is less than 60cm from my nose, which I read well before going to countries where bull fighting is practised in any form is very specific, glorifying a pre-Spanish Civil War period of Pamplona's fights. No matter which form, it is still the will of human beings over the lack of choice of animals and fairness does not count. To those who justify bullfighting or running in any form, bear in mind that many people who oppose that have given all dimensions serious consideration before deciding.

Margaret..How you trying to tell me that the bulls enjoy it?.....Bullshit! It's like fishing...if the fish enjoy it so much, how come they always swim the other way when hooked? The goats that are thrown from towers must enjoy it; well they never grumble much!

Margaret, I am aware of the difference. Whilst the bull is not killed in Course Landaise for example, it is tormented. As they are at Bous a la Mar where the bulls end up in the Med, hardly their natural habitat.

For info - the man's no longer in a coma. Traditions don't make it right to be able to publically execute animals for "sport". France is a democracy and if it went to the vote I think the anti-corridas would win.