I’ve had my 2€ Free sim for years however as I move onto more online teaching stuff I want to get some more internet but not spend a fortune. I think 20go should be enough and I see there is a Prixtel and an Auchan deal which sound pretty good. Is anyone with these companies? I would like to be able to ‘hotspot’ to my computer so I can work / teach out of the house if I need to. Thoughts appreciated.

SFR works well here (I had that for my work phone in my tourism job and was faultless) but I had a bouygies telecom card early on and had lots of internet and phone drop out so would rather avoid companies run through them. 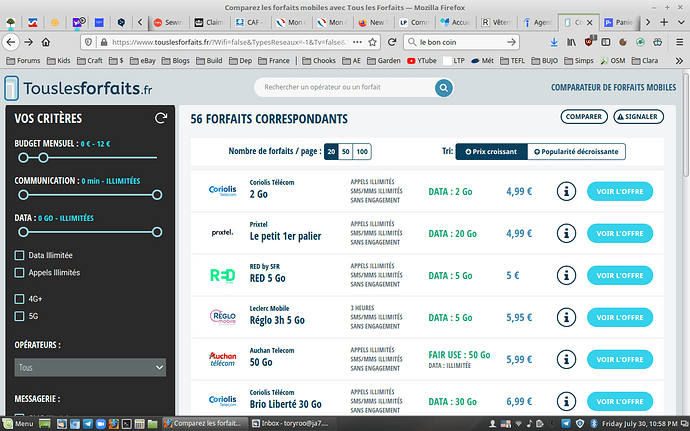 La Poste and Leclerc both told me they run on SFR.

Auchan Mobile is higher rated than Prixtel on monpetitforfait dot com. But people there are moaning about getting worse since Auchan moved it from SFR to Bouygues earlier this year. Oh joy I’ve just signed up with Bouygues grrr.

I moved from the €2 Free deal to Leclerc €10 deal and have been very pleased. Much better signal - SFR - international roaming included (for when we can again) and it seems reliable and stable.

@toryroo
Hi Tory, any reason you don’t want Free’s 1yr deal no-contract, e.g. currently 70gb for 9.99€?
You mentioned you were only aiming for 20gb, but I assume word will spread like wildfire about your teaching and you’ll be inundated when school goes back and go through a lot more data; everyone charges a fortune if you go over your limit.

Because it is twice the €5 ones

things are very tight atm so would rather just get something better than the nothing I have now! Even doing loads of emails / calls / music the highest monthly thing I did when I had my unlimited with my work phone was 8go / month so I’m thinking 40 would be fine. The prixtel one has a thing where it hten goes to €7,99 for 50 and €9,99 for 60 without being hit by loads of charges. Was really hoping someone has used them!

Auchan moved it from SFR to Bouygues earlier this year. Oh joy I’ve just signed up with Bouygues grrr.

So glad you said that as I know Bouygies is bad here so that wipes Auchan off my options!

forgot abotu them, will have a look.

Even doing loads of emails / calls / music the highest monthly thing I did when I had my unlimited with my work phone was 8go / month so I’m thinking 40 would be fine.

@toryroo
Bingo, you have a comparison, phew, I was worried you may have been jumping into data-usage for your new job and and fallen into a trap of exorbitant charges. Clearly that’s not the case. Looking forward to hearing updates tho.

Not sure about the format of your online teaching, but for the last five years of my uni career, I worked entirely online with Open University undergrads from above the Arctic Circle to Crete, but this was done entirely on a laptop. A lot of online teaching is atemporal, in other words it’s not live conversation - people post things in their own time and you respond in yours.

Even if you’re using live one to one conversation entirely, the above might be a better option - better quality sound and images, less expensive and easier for all parties to read. Just a thought…

Hi,
I’ve been using Prixtel for just 1 month - it’s possible to choose either SFR or Orange - I have Orange and so far it’s been great. On a 2 week trip recently I had tethered by laptop to the prixtel phone and it worked faultlessly and despite having used well over 20gB of data, the cost is €4.99. A good side effect is also that you can log into Orange hotspots.

That is fabulous - thank you so much (sorry would use yoru first name but don’t know who you are!!), exactly the sort of real feedback I wanted and definitely needed to know about using the phone as a hotspot to my laptop! their current offer goes until the 3rd I think so I better get onto it!
Cheers, Tory

I just had another look and I’m convinced this is the best offer around at the moment! And I have heard that if you find a similar / better deal at the end of the year (when they put the price up to 9,99€) you can sometimes get them to leave you on that cost rather than loose you. Worth a try anyway but have a year to worry about that.

Whoo hooo just did it all, very quick and easy, sadly can’t get the number moved etc until the 11/08 - ahh well at least a decision has been made (not always easy for me!) and action taken! Will be so nice to have some mobile data, I always feel a bit stupid having to say ‘I don’t have internet!’!

it’s possible to choose either SFR or Orange

I wonder if this has changed or is just for the bigger packages (I got the cheapest one) as I didn’t get given a choice, just SFR (hich is fine, I know they work well here).

I’ve got the cheapest package - “Le petit” and this does allow it.

Can you let us know @ykm71 @toryroo how you get on longer term with Prixtel sometime when you’ve had it a bit longer please?

I’ve got the cheapest package - “Le petit” and this does allow it.

That is really weird Yogesh, it honestly didn’t give me the option and only had ‘reasueax SFR’ or something written. Did you get the choice at sign up or once you got your SIM?

Hi - I had the option when I signed on and also when I go to my dashboard on the Prixtel website, the option is there under " Gestion de mon abonnement". When you change your network you get a new Sim card for the new network.

I wonder if they have just changed as no option and I was looking for it!

Whether Orange admits it or not, and whether it’s legal or not, I’ve had Orange on and off through various routes direct, MVNO like Prixtel, roaming, for quite a few years now. Comparing the signal strength and speed of 2 phones one direct to Orange, one by another means of access at the same time, again and again the non-direct Orange connection is considerably slower Or may not even be able to get a useable connection at some times of day.

Orange is the strongest signal by far here. We are at the edge of everybody’s coverage. So any differences are exacerbated as the signal is often not very strong anyway. But empirically IME Orange may sign contracts with other sellers but doesn’t really want to share. In that case even if Orange is by far the.strongest network you might get better treated by another network.

VERY pleased that I have just put in my new Prixtel sim - goodbye FREE!!! So pleased, all the mms / internet etc worked straight away!

Hi Tory. What was the procedure to transfer from Free to Prixtel? Did you have to send a registered letter to Free to cancel?