Western bourgeois fantasies about Tibet and the harmful racial stereotypes they peddle simply have no need for the real Tibet and the suffering my country endures.

And are Scotch eggs really Scottish?

I think you’re both going for “mis-labelled” rather than “mumbo jumbo”.

“a maze of legal mumbo jumbo”

…And the Tibetan writer (as do so many others) confuses or conflates ‘culture’ and ‘race’.

Before the discovery of DNA it was commonly held that there were five races in the world, whereas now there’s just one. However, even prior to DNA mapping Tibetan wasn’t one of the the five ‘races’ instead they would have been classified as ‘chinese’ and I’m sure the writer wouldn’t have wanted that!

And are Scotch eggs really Scottish?

It just depends on which of the many claims of origin you believe, they could be

We never called them scotch egg, we called them Scotties and they were made with fish paste and eggs.

Decedents of the ancient Qiang people, as are most South-Western Chinese.

Interesting, example of shifting meaning - I’ve just checked two different editions of the OED and their definitions differ considerably from one another. The Concise OED on my computer gives the definition you provided, whereas the much larger and older two volume Shorter(!)* OED from my bookshelf,

1738 1. A grotesque idol said to have been worshipped by certain tribes of Negroes.
2. transf. An object of senseless veneration. 1847.

It was with shock and dismay that I read Daniel B. Schneider’s review of Helen Bannerman’s 1899 classic, ‘‘The Story of Little Black Sambo,’’ reillustrated by Christopher Bing (Children’s Books, March 14).

Neither Schneider nor Bing appears to realize how deeply offensive the language of Sambo is to people of color and their white allies. Sambo is a derogatory name for a black man, a hateful synonym. Sambo’s parents are named Mumbo and Jumbo – again, names that belittle people of color, implying that they cannot speak standard English but only gibberish. This book subtly teaches our young children that they can call a black child Sambo and not insult him.’

So it’s another one to add to that ever growing list!

and they were made with fish paste and eggs.

Hope you won’t be too offended if I think that seems a vile combination!

Salmon paste so it was basically a fish cake with an egg inside, then fried or baked.
I have also had them in Yorkshire, they were basically the same.

it was basically a fish cake with an egg

That’s sounds a better, but I get the impression we’re not in total agreement on their merits

I’m personally reluctant to combine fish and egg in anything other than smoked haddock or kippers.

Are there no limits to the Scottish imagination?

They are a nation of inventors after all. 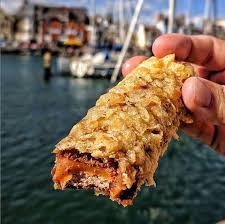 Personally my favourite is a battered creme egg

No no no, my favourites were either Turkish delight or Fry’s cream

Has anyone in Glasgow started a refuge for battered creme eggs?

Apologies to anyone offended by that lapse in taste …

Stop it… you horror…

Now you’ve got me hallucinating about Cadbury’s Creme Eggs… used to adore them, but haven’t eaten one in years and had almost forgotten just how wonderful they are…

Vero, apologies for helping to take your very interesting post off-subject so quickly, but OTOH digressions are one of the things I love about SF. When marking undergrad essays, I used to urge students to stay on the subject, whereas here, it’s fun to participate in everyone going off-piste.

you want off piste, I used to visit Sambo’s Grave twice a month.