I just had several nasty shocks. Planning a brief visit to UK next month, I suddenly noticed that my passport had expired. Thanks to the excellent new Beta online service, renewal takes only a few days at this time. But we are legally required to have valid proof of identity in France and for some purposes a driving licence is not recognized and I had been a couple of months without this.
The big shock came when I had to provide an acceptable photograph. This completely shattered my delusion that I still looked reasonably good - for my age.
The picture came out looking like Pharaoh Ramses’ mummy!
The final shock came when my wife pointed out that this would be an EU passport and might no longer be valid in 6 months time. I don’t believe that there is any reference to that in the Chequers proposal.
What are they going to do? If they crash out of the EU, will they will have to provide alternative documents for all UK passport holders? Who will pay? I have just parted with £108 and will be very angry if I have to pay all over again in a few months time. But can the Government afford the cost? Assuming that half of all Brits have a passport, that would come to around £324 million. Another week of the “Brexit premium” down the pan!
I can’t help wondering how many more surprises lie in wait.

The final shock came when my wife pointed out that this would be an EU passport and might no longer be valid in 6 months time. I don’t believe that there is any reference to that in the Chequers proposal.

There isn’t such a thing as “an EU passport”.

When it is issued it will be a burgundy passport, as now, but it is still a UK passport and will not cease to be valid next March - whatever happens.

I think that you possibly suffer from the same problem as me, you wear glasses. The passport photos taken without them seem to show an unfamiliar, older person.
There will be no problem having a ‘EU’ passport.

So those who feel a sentimental attachment to blue passports will have have to live with red ones for up to 10 years? Quel horreur!

So those who feel a sentimental attachment to blue passports will have have to live with red ones for up to 10 years? Quel horreur!

My heart bleeds for them

We will shortly feel sentimental about the burgundy passports from “the good ole days when we were part of Europe” - there was a big announcement about the blue passports being reinstated which was deemed as well worth the cost of Brexit.

Current passports have European Union on the front cover. Just to set our minds at rest, can you please give us a link to the source of your information?

Current passports have European Union on the front cover. Just to set our minds at rest, can you please give us a link to the source of your information?

They do but they also have, in a larger font, “The United Kingdom of Great Britain and Northern Ireland”.

All that will happen post Brexit is that the words European Union will disappear - oh, and they will be blue.

While “EU citizenship” is a thing - and you get it by being a citizen of a member state, the EU does not issue passports.

Google “EU passports” or “does the EU issue passports” for more info. 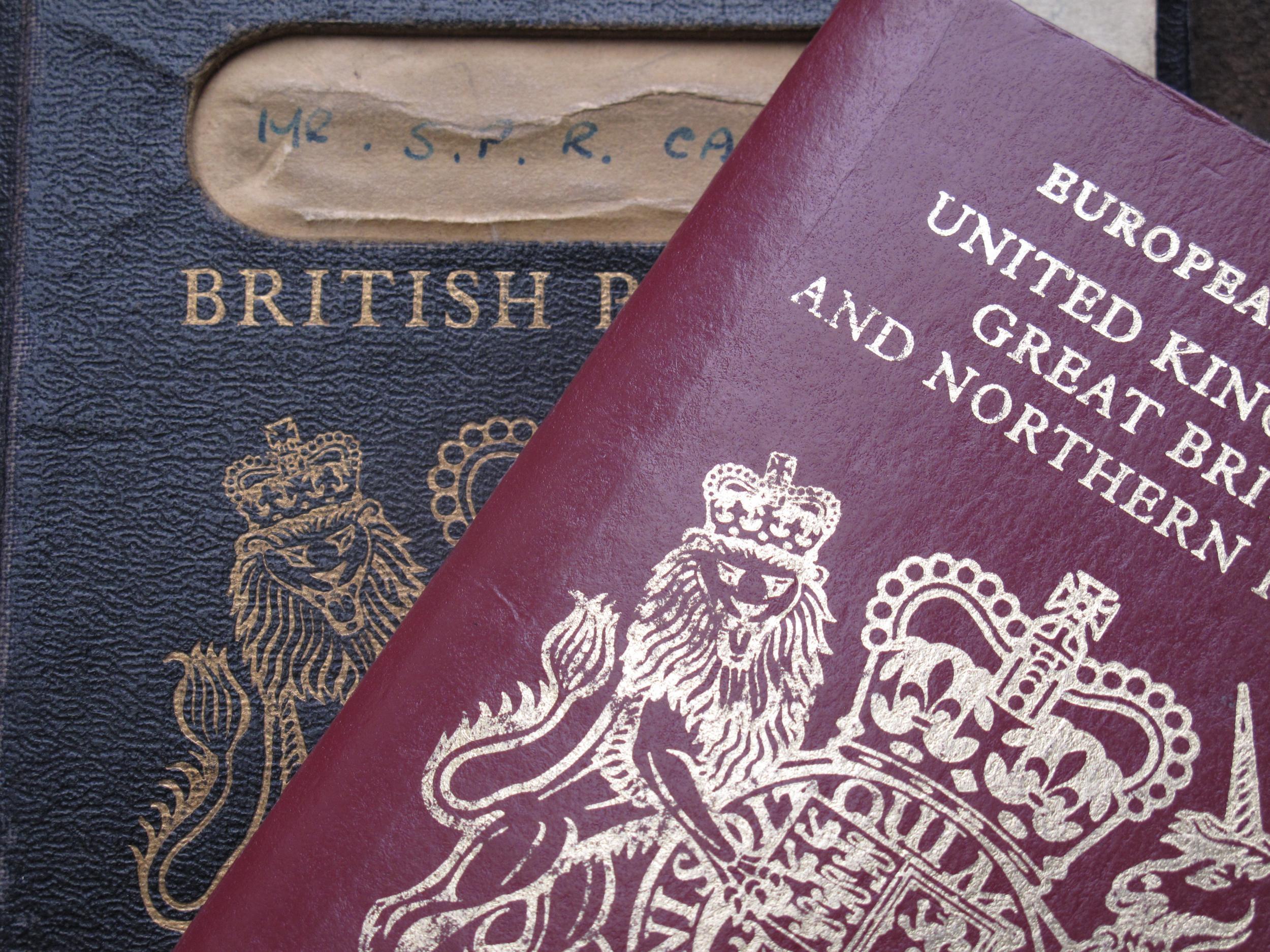 Britain to get traditional blue passports back after Brexit

Even after Britain's departure from Europe, four million ‘EU burgundy’ travel documents will still be issued

When ETIAS kicks in I think people will finally realise what it means to be a member of a “3rd Nation” travelling into the EU.

Yes I understand “The European Union itself does not issue ordinary passports , but ordinary passport booklets issued by its 28 member states share a common format.” But that doesn’t spell out exactly what will happen after Brexit. Have the remaining members agreed that passports issued by an ex-member are acceptable in the current format? And what about countries outside the EU. Nice excuse to refuse entry, or lock us up for falsely pretending to be an EU citizen…

I don’t think anything spells out what “exactly” will happen after Brexit - nobody knows. (but I do suspect we will be worse off and travel will be more difficult).

I expect (ultimately) there will be a tourist visa waiver for visits of up to 90 days as there is with many countries including the US - so there will be more paperwork, maybe boarding cards to fill in and eventually that will fade as those who are OK to enter are pre-authorised using ETIAS.

However, if you want to travel for work expect a whole truckload of paperwork.

One thing does worry me though - and that is the future of Brittany Ferries which has been in a dodgy position financially (and industrial relations wise) in the past and almost entirely relies on traffic between the UK and western France. Any reduction in that could put a lot of pressure on them.

Were they to go bust getting to the house would start to be a significant chore.

Could be something in that David. As a lifelong spectales wearer, I do appear naked without them, but the change between 71 and 81 does come as a bit of a shock. I cheer myself up with the thought that the razor-sharp lens on my new camera may be a contributory factor!

Possibly when you look at your ‘naked’ face in the mirror, Mike. But as a specs wearer myself, it’s my impression that no-one else notices the putative ‘change in my appearance’ when I flaunt my nakedness before family or friends, although a very few have said to me “You look a bit tired, Pete. Had a heavy night?”

Finally, congratulations to H M Passport Office! I submitted my online application on the 10th September. I didn’t realize at the time, but they don’t start processing the application until they have the old passport and I could have posted it the same day, but waited until the following morning, so they didn’t get it until the 14th. I received my new passport yesterday, the 17th.
Mark Thomson is Director General of HMPO. I wonder if he could take a look at the railways when he has a spare moment…!

Why do you suspect that? I don’t know, but presume you remember what traveling around Europe was like ‘before E.U.’? If you don’t remember let me say that it wasn’t a problem. I was never banned from anywhere, hassled or prevented from traveling. This whole nonsense about documents has got completely distorted, primarily by people who object to Brexit.
I remember all to well the nonsense spouted about having to change pounds into euros. Since when was it a problem when most changed pounds into pesetas etc. People will moan about anything these days!

Why do you suspect that?

Why do I suspect what?

I don’t remember what travelling in Europe was like before the EU because I was 10 when we joined; I do remember travelling for business with a £50k computer in about 1989 and the total hassle of getting the paperwork signed at various border crossings to prove that it had not been permanently exported from the UK.

I do not believe (and did not say) that we will be banned, hassled or prevented from travelling. I expect our future relationship with the EU will be similar to other 3rd nations - i.e visa waiver for up to 90 day tourist visits, however I also suspect that we will fall under the ETIAS scheme when it gets going in 2020 or so, so there will be more paperwork. It isn’t unlikely that we will need international driving permits as well which, again, is a bit of additional red tape.

I also don’t suspect that it will be much harder to live in France if you are financially self sufficient but it will, almost certainly be necessary to apply for a Carte/Titre de Sejour - again more red tape though not all that onerous.

I think existing pensioners are right to worry about the S1 scheme, less so about getting money in and out (but they might need to get UK pensions paid into UK bank accounts and if you don’t have a UK base of operations that might be more hassle).

If you wish to work in France (or anywhere else in the EU) then it will be significantly more burocratic than now, have a look at the rules for 3rd nations - they’ll all apply to Brits.

So, You have no experience of traveling in Europe before the .E.U. Apart from having to prove something about an expensive computer(which you still have to if from outside the E.U… today) Everything else in your post is something you believe!!!

A little short on facts but let not that get in the way of reality!!! But then I wouldn’t expect the recollections of a ten year old to be particularly reliable!